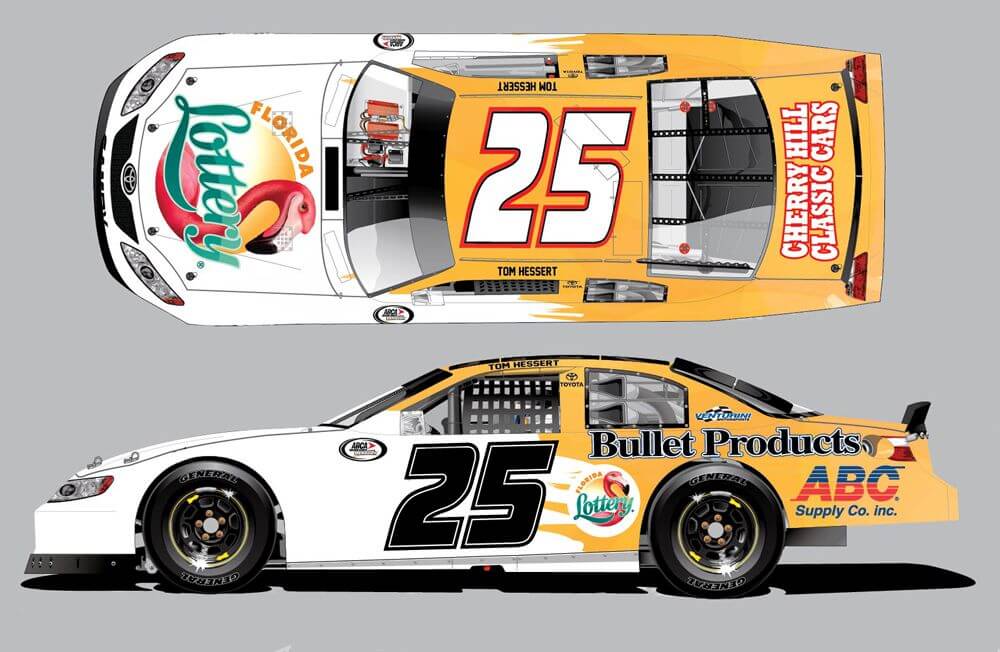 “I’m thrilled to be headed back to Daytona for the start of another season. As a driver there’s no better place to compete for a chance to win. Daytona is such a special place and the thought of parking my car in Victory Lane would be a major accomplishment and dream come true,” said Hessert.

Hessert, a native of Cherry Hill, NJ, made the offseason move to VMS after driving the previous four seasons with Cunningham Motorsports. Hessert is a nine year veteran of the ARCA Series. Hessert inherits the No.25 Toyota, which was vacated by last season’s driver combination of Frank Kimmel and Brandon Jones.

“Joining Venturini during the off-season only adds to my excitement,” said Hessert.” We tested last month and had a lot of speed. Daytona is a tough place to win but I’m confident we have all the pieces and resources in place for a legitimate shot. We’ve set the bar high this season and everyone on the team is focused on one goal – a series championship which starts on lap one at Daytona.”

Hessert, already a five-time ARCA Series winner, will make his 160th career start and ninth attempt at Daytona glory. Of his five wins, Hessert has one restrictor plate victory to his credit, winning at Talladega in 2013.

“We’re pleased to announce our strategic partnership with Venturini Motorsports at Daytona this year,” said Tom Delacenserie – Secretary of the Florida Lottery. “Once a year Daytona becomes the center of the universe for Motorsports enthusiasts. We’re proud to connect our brand to this event and kick off our involvement during Daytona’s Speedweeks. In addition to our involvement with VMS and driver, Tom Hessert, the Lottery will be on site engaging with fans the weekend of the Daytona 500.”

Joining the Florida Lottery’s sponsorship effort with VMS is yet another Florida-based group, Bullet Products. Bullett Products is a leading manufacturer and patent holder of roofing products with coast-to-coast distribution.

Entering their 34th year of ARCA Series competition, VMS looks to return to Daytona’s Gatorade Victory Lane for the second time in the past three years. In 2013, driver John Wes Townley delivered the team’s sole Daytona victory. VMS, known as one of the premier driver development teams in the country, has compiled 39 series victories overall – 26 wins coming since 2007.

Founded by successful entrepreneur Jonathan Leonard, Bullet Products LLC. is a leading manufacturer and patent holder of roofing products with coast-to-coast distribution. The company is committed to providing the best products, warranty, customer satisfaction and installer experience in the roofing industry. The company strives on its determination to adhere to business best practices on a daily basis. The customer experience drives Bullet Products LLC to create the best products and to improve when needed. The company’s signature item, the Bullet Boot is approaching a massive national rollout which will eliminate the dangerous and unsightly Lead Pipe Boot products that are commonly used by roofers in Southern Florida. The product provides a safe, economical and aesthetically product that improves the installers experience, but providing an equally benefit for homeowners. www.BulletProducts.com

Venturini Motorsports (VMS), fielding cars for over 30-years in the ARCA Racing Series presented by Menards, is one of the premier NASCAR driver development programs in the country. Multiple team championships and consistent on-track success, VMS has evolved into one of the most recognizable names in motorsports. Since 2007, VMS has assisted in the career development of notable NASCAR drivers such as Joey Logano, Justin Allgaier, Ryan Blaney, Alex Bowman, Brian Scott, Kevin Swindell, John Wes Townley, Erik Jones and Justin Boston. Over the years the Venturini name has become synonymous with modern-day racing in America. In 2012, the Venturini family was inducted into the National Italian American Sports Hall of Fame (www.NIASHF.org) and now find themselves enshrined with such sports icons as Joe DiMaggio, Mario Andretti, Vince Lombardi, Tommy Lasorda and Rocky Marciano.