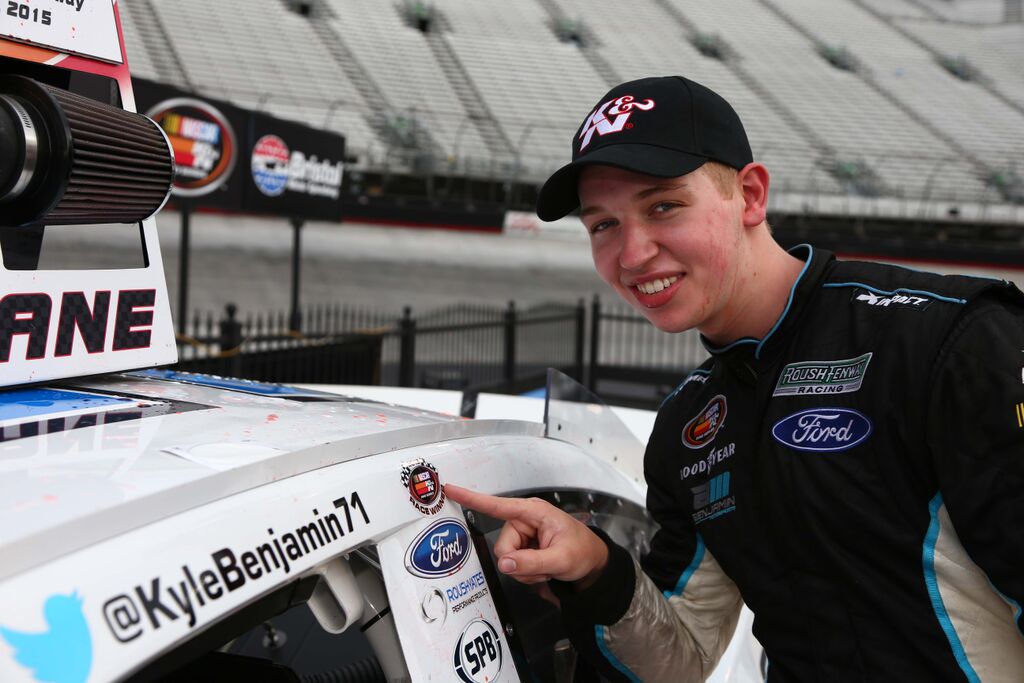 MOORESVILLE, N.C. (February 4, 2016) – 18-year-old Kyle Benjamin, a race winner in both the NASCAR K&N Pro Series East and the ARCA Racing Series presented by Menards, will compete in select 2016 events in both series for Ranier Racing with MDM.

Starting with the Feb. 14 race at New Smyrna Speedway, the season opener for the K&N East, Benjamin will pilot a Chevrolet for the recently announced pairing of Lorin Ranier, a longtime NASCAR driver development consultant, and the pre-existing MDM-Hillman Racing team. 2013 K&N East championship-winning crew chief Mardy Lindley will serve in the same capacity for Benjamin in all of his K&N East and ARCA starts.

“This is a tremendous opportunity for me to work with industry experts,” said Benjamin. “Lorin, Mardy and Mark (McFarland, the team’s competition director) have a lot of experience and have a had a lot of success working with other young drivers. They’re building a really solid foundation right now, and I’m honored to play such a key role.”

For Ranier Racing with MDM, the addition of Benjamin adds a short-track driving pedigree, establishing a benchmark for the team’s future driving talent.

“Kyle is one of the most talented young drivers competing on asphalt today,” said Ranier. “We’re happy to have him as part of the team. With him, the personnel we have and the equipment we have at our disposal, we expect to compete for the win whenever we’re at the track.”

Benjamin, a native of Easley, S.C., will pilot a No. 40 Chevrolet when participating in the K&N East. In ARCA competition, he’ll sport the No. 28, a number utilized by the likes of Buddy Baker, Benny Parsons, Cale Yarbrough, Bobby Allison and Davey Allison while driving for Ranier Racing.

Benjamin, who earned his first K&N East victory last year at Bristol Motor Speedway, was selected by NASCAR as a member of the 2015 NASCAR Next class, a dozen of the best up-and-coming prospects in the sport. In 2013, Benjamin was named the number-one young driving prospect by popular online short track racing publication Speed51.com.

He is a winner of two ARCA races. At the time of his victory at Madison International Speedway in 2013, he was the youngest winner in the series’ 60-year history.

MDM-Hillman Racing was established as a joint partnership between NASCAR veteran Mike Hillman and Virginia businessmen Doug Fuller and Matt Miller at the start of 2015 to develop young talent aspiring to reach the top ranks of NASCAR competition and fielded two cars – the Nos. 40 and 41 Chevrolets – in multiple NASCAR K&N Pro Series events throughout the 2015 season.

Ranier Racing was established in 1952 by H.B. Ranier. The team fielded entries in the ARCA series and in NASCAR. Made famous by H.B. Ranier’s son and Lorin’s father, Harry Ranier in the 1970s and 1980s, Ranier Racing won 24 NASCAR Cup Series races including 3 Daytona 500s and fielded cars for drivers Lennie Pond, Buddy Baker, Benny Parsons, Cale Yarborough, Bobby Allison, Davey Allison and Tony Stewart. After Harry Ranier’s passing in 1999, Lorin Ranier continued the family business and remained in the sport as a Consultant, Spotter and Driver Development expert in the industry.