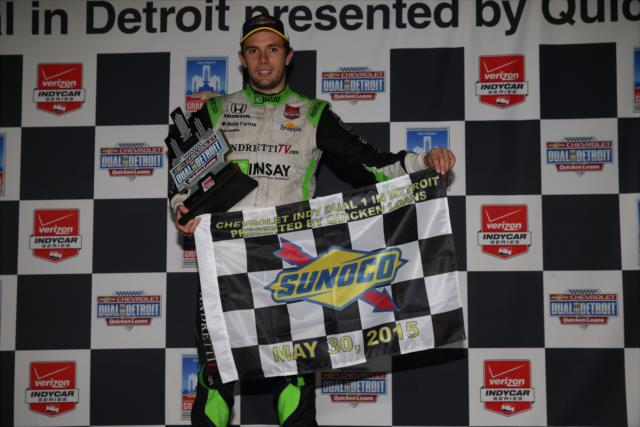 The expectations were null for Colombian open wheel prospect Carlos Munoz entering the 2013 Indianapolis 500-mile race. With more seasoned veterans on the Andretti Autosport team, the Indy Lights veteran was almost a non-entity entering the first practice session during the month of May. Then Munoz let his driving speak for itself. After turning heads in the paddock by running near the top of the timing charts for the first week, the newcomer would prove it was no fluke by qualifying for his first career Verizon IndyCar Series race in the center of the front row, the first IndyCar newcomer to start on the front row at Indianapolis since Vincenzo Sospiri pulled the feat for Team Scandia in 1997.

Using more aggressive lines around the four quarter-mile corners than most veterans would even think about using, the rookie preserved through many firsts on Memorial Day weekend, his first IndyCar race, his first career pit stop, and his first 500-mile distance to cover, to finish second. The effort ending just behind eventual winner Tony Kanaan was enough for Munoz to earn Indy 500 Rookie of the Year honors. With a strong debut his belt, the prospect figured to be an immediate challenger for victories and the series title the following year in his first full tour. Those feats however, have taken time to develop.

Entering his third full season with Andretti Autosport and coming off his first career victory in the first leg of the Chevrolet Duel In Detroit last June, the Colombian is still looking to improve after only placing 13th on the final points table last season.

“(Detroit) was long time ago it seems, so I don’t remember now. I’m so focused on the new season. Past is past. I like to always focus on the future.” said Munoz during IndyCar media day last week in Indianapolis. “It was nice to have my first win last year.Hopefully this year is much more. The main goal is to be fighting for the win in each race.”

One thing that could aid Munoz’s cause, as well as the other Honda runners, will be a potentially stronger Honda V-6 engine and aero kit, two parts of the equation that for most of 2015, appeared to be inferior to the Chevrolet’s camp options. Unfortunately for Munoz and his Andretti Autosport this lack of performance was particularly evident last May in the 99th Indy 500. Despite his aggressive style of driving, even a late race strategy call to put him upfront was unable to keep him there against the GM stalwarts from Team Penske and Chip Ganassi Racing. To add insult to injury, a late stop to take on fuel just before the checkered flag relegated him to a 20th-place finish, when a top five result appeared possible.

Despite earning his worst result ever at the Brickyard last year, the two-time top four Indy finisher appears eager to bounce back at the two and a half mile oval with extra incentives in play due to the historic nature of the 100th running of the event.

“It’s the race everyone wants to win, the teams, especially the sponsors putting extra pressure on the teams to win this race,” admitted Munoz last week. “I want to approach is differently, as if it was a normal 500, not the 100th. Putting pressure on yourself, that’s not good. I want to approach it like every other race of the schedule.”

The ovals have suited the 24-year old veteran well over his three years of IndyCar activity. Five of his nine career top five efforts have come on ovals, including two of his three earned in 2015. Although the fan of the Real Madrid soccer team is eager to compete for the first time at Phoenix International Raceway, his targets for 2016 are varied.

” I like to personally do the best job I can. Outside the track I’ve been training physically, mentally, working with my team, with my engineers, with my new staff this year.” stated Munoz, who knows the effectiveness of his Andretti Autosport squad will greatly influence his efforts in the new year. “The team, as well, does a good job. Try to win all the races, fighting for the win. That’s the main goal, be up front, be competitive.”

Although not an obvious challenger for a high place on the points table in 2016, if the Colombian can regain his form of 2014 and not necessarily 2015, there is a chance for him to eclipse his eighth place finish in the standings in the 2014 IndyCar campaign in 2016 and possibly give the nation of Colombia a second serious championship challenger alongside reigning Indianapolis 500 champion Juan Pablo Montoya.