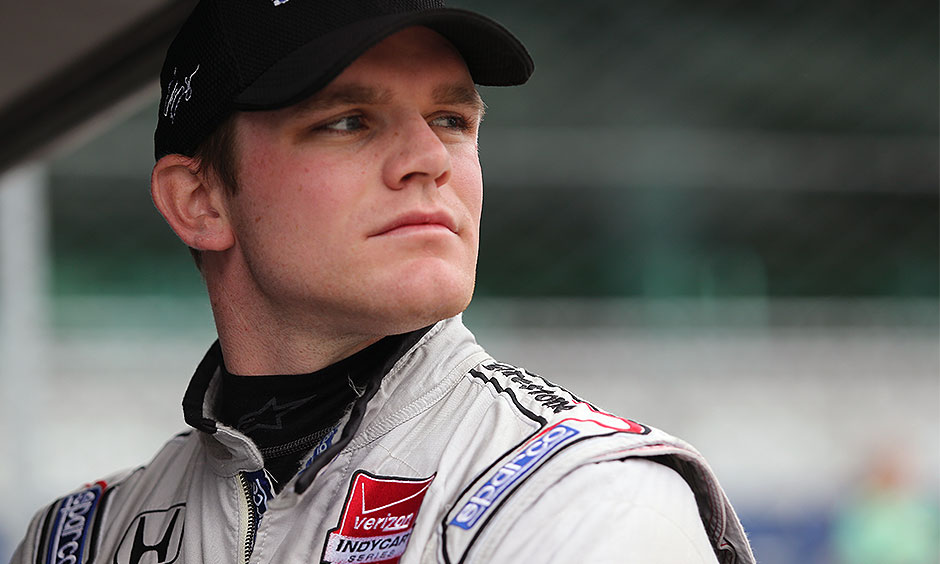 Conor Daly has been trying for three years to make it into Indy Car, trying anything to get a ride with a team. Finally, all that hard work has paid off and Daly will be driving full time for Dale Coyne Racing.

“It’s not going to be easy at all,” Daly said. “Yeah, it’s a culmination of many years of gaining experience and working towards this, kind of all the pieces finally coming together. There were a lot of pieces, more than I thought. Finally, we figured out how to put the puzzle together and here we are. Massive thanks to Dale.”

It seems only fitting, given the livery that the car will carry. Daly describes it as being the Irish colors which makes total sense because Daly is very much Irish. The result is Daly also offering free chicken and meat loaf to everyone as his sponsor is a local restaurant in Indy owned by a close personal friend of Coyne’s – Jonathan Byrd.

“Dale put a lot of effort into this,” Daly continued. “We were able to find our friends, Jonathan Byrd, all having fried chicken one night. So fried chicken and meat loaf for everyone for the season. It’s going to be an exciting year for everyone, even though I’m in Irish colors.”

Byrd and his family have been around racing for many years but they took a break for a few years and this is their welcome back to racing. Daly notes that while not everything in racing makes sense, this is something that fits together perfectly in combining an Indy-based company, with a driver who was raised on the northeast side of Indiana.

“It kind of all fits together well,” he said. “Dale loves it. All the guys on the team are super pumped because we had a deal on in December.”

It’s obvious that Daly is very excited moving forward with the whole team, including the new experiences it brings forth, like testing.

“It’s cool to have these things and have the luxury of going testing. Imagine that,” he said. “You get to prepare for a race instead of hopping in before qualifying at Long Beach. I’m excited about that. Another test day. It should be fun.”

Last year before the season started, Daly tested a ride for Coyne, but something happened and the deal fell through. He then ended up driving part-time at Schmit Peterson Motorsports.

His first race was Long Beach, where Daly turned heads by leading a few laps and finishing very decent. Daly thinks that’s where the deal started and why Coyne ended up calling on him when he needed a full-time driver this season. Notably because he only ran a few races with SPM he will still be eligible to maintain his Rookie status.

“I think it did,” he said. “I’ve been trying to call Dale for years, never got an answer. When I saw him calling me that morning, I was like, Oh, maybe it worked finally. That was the beginning of a great relationship. I got to know all the guys. Mike, my engineer, he wasn’t engineering me that weekend, but obviously we had a good relationship starting there. Apparently there was a scheme where they weren’t going to run me at any other races so I could maintain my rookie status. There was sort of like a strategy behind this? Yeah. You could have told me that six months ago or something. But, yeah, it’s cool. I appreciate it. It’s going to be a fun gig.”

IndyCar has confirmed that he can run for Rookie of The Year, in which if he does win the award, it could lead to more opportunities for him.

In being able to land this ride, Daly is also keeping the family tradition alive. His father was also a race car driver and competed in the Indy 500. His father has done what he can to help Daly get his foot into the door of IndyCar and now that that has finally happened, he is overjoyed.

Daly is also happy to have his dad by his side to gather intel and advise from, especially surrounding Indy and for the 500.

“I think most of the advice came in 2013 when I did my first 500,” he recalled. “He’s really excited. Every time I see him, he’s pretty pumped, seems to be smiling a lot more, which I guess is good. Finally made him proud. It’s been a tough deal, especially for him. He’s been trying everything he can do to help put programs together. Now we can get back to giving advice on like the actual driving and the actual sport rather than the commercial side and the funding side and all that. So that will be cool. We’ve been discussing kind of goals for the year, what our plan is, how I’m going to best use this experience and the opportunity we have. It’s obviously really helpful to have him on my side, for sure.”