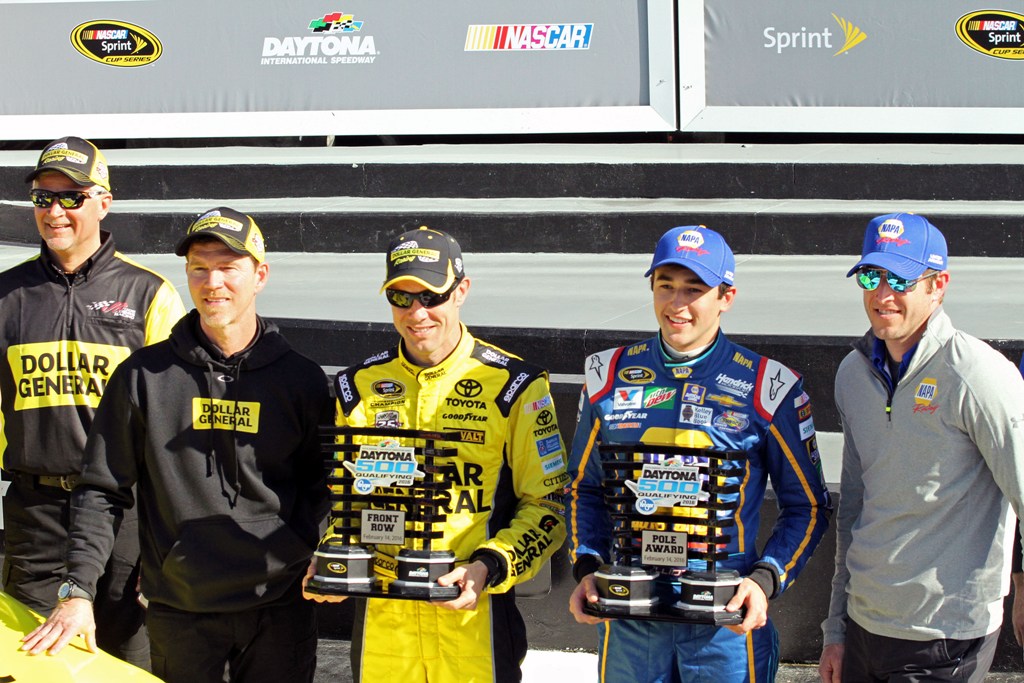 The expectations placed on the shoulders of 20-year-old Chase Elliott coming into the 2016 NASCAR Sprint Cup Series season were great and lofty. Elliott not only has the legacy of his Hall of Fame father and 1988 Sprint Cup champion Bill Elliott to live up to, but he also has the daunting task of following in the footsteps of four time Sprint Cup Series champion Jeff Gordon in the legendary No.24 Hendrick Motorsports Chevrolet.

On a sun splashed Sunday afternoon at Daytona International Speedway, Elliott served notice by winning the pole for next Sunday’s 58th running of the Daytona 500 with a blistering lap of 196.314 MPH.

“This is a very, very cool way to start the 2016 season with Hendrick Motorsports,” said Elliott.

Starting alongside Elliott in the front row in next Sunday’s Daytona 500 will be two-time Daytona 500 champion Matt Kenseth. Kenseth secured the second position with a lap of 196.036 MPH.

“We had a lot of speed in all our Toyotas,” said Kenseth, who qualified on the front row for the Daytona 500 for the first time. “Really looking forward to Sunday.”

Among the non-Charter drivers, Ryan Blaney and Matt DiBenedetto were fastest in qualifying on Sunday, which guarantees them starting spots in the Daytona 500. The highest finishing non-Charter team in each Can-Am Duel race will also make the 500 field. In each of the Can-Am Duels, the fields will consist of 18 Charter teams and four Open teams.

Notably, Martin Truex Jr. did not set a time as a result of concerns from officials surrounding the roof flaps on his racecar.

The next step in Daytona Speedweeks is Thursday’s Can Am Duels will set the starting lineup positions 3rd through 40th.