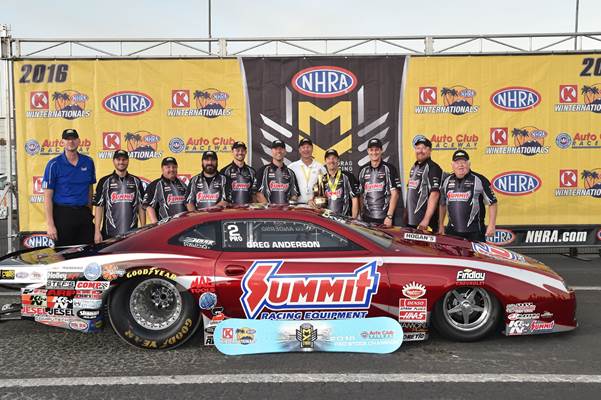 The four-time class champion powered his Summit Racing Equipment Chevrolet Camaro SS to an exciting victory over KB Racing teammate Jason Line in the final for his 79th career victory. It was the 25th time that Anderson and Line, who won the season opener at Pomona in 2015 and ‘14, met in a Pro Stock final.

Anderson, the Pro Stock championship runner-up last year and the top qualifier for the season-opening event with a weekend-best run of 6.585 seconds, won on a holeshot. His margin of victory over the No. 2 qualifier was 0.0101 of a second.

“It feels awesome,” said Anderson, who recorded his sixth career victory at Auto Club Raceway. “It was a fantastic team effort. Things just went so well all weekend and I felt so confident all day until the final round. I felt like the underdog there in the final. Apparently, it was my day. The sun is shining on me today.”

A day earlier, the Bowtie Brand claimed seven of the eight qualifying slots that make up the top half of the 16-car field.

“It was a tremendous start to the 2016 season for the Chevrolet Camaro SS teams in Pro Stock,” Chevrolet Racing NHRA Program Director Roger Allen said. “We are proud of the effort put forth by all of our teams, and it was exciting to see all three KB Racing-powered teams in the semifinals. We knew Jason and Greg would put on a great final, and they did. Now it is on to Phoenix.”

For the first time in the history of the class, Pro Stock cars went to the line with fuel injection under the hood and without the trademark hood scoop to give the cars a look much closer to that of the production Camaro SS.

“Everybody is on a steep learning curve right now and we got the jump on everybody, but I can guarantee that all the competitors in our class are not happy,” Anderson added. “They are going home and going to work hard, and it will be a new ballgame at Phoenix. We’re also going to have to buckle down and find something better again. That’s the beauty of a new challenge. There is room to grow.

“It’s kind of neat to see everybody trying to conquer it on their own, and that’s the beauty of all the engineers and ingenuity in this class.”

Brittany Force (Monster Energy Chevrolet) had a run of 3.756/320.05 but fell in Round One of final eliminations.

Fletcher also advanced to the Competition Eliminator final, and was seeking to double up in two classes at a national event for the second time. He accomplished the feat in 2013 at Seattle. Fletcher fell to Doug Lambeck by 0.0174 of a second.

“This is outstanding to start the year off with a win. Thanks to Chevy for this great COPO car,” Fletcher said. “I’m very fortunate and blessed, but I am a bit greedy. I would have liked to win two.”

Next up for the NHRA Mello Yello Drag Racing Series will be the Car Quest Auto Parts NHRA Nationals at Wild Horse Pass Motorsports Park in Phoenix, Arizona, on Feb. 25-28.

ON WINNING FIRST EFI RACE: “It feels awesome. It was a fantastic team effort.Things just went so well all weekend and I felt so confident all day until the final round. I felt like the underdog there in the final. I knew it was going to need something special. Somebody removed my foot from the clutch pedal. The good Lord apparently did. When I had to get it done I got it done. Sorry, Jason (Line), maybe next week. Apparently, it was my day. The sun is shining on me today. The entire KB Racing team had a great day. I just can’t tell you how proud of the job the KB Racing team has done for the last two months. It’s been a lot of hard work on this KB Racing team and everyone who supports us. Everybody is on a steep learning curve right now and we got the jump on everybody, but I can guarantee that all the competitors in our class are not happy. They are going home and going to work hard,and it will be a new ballgame at Phoenix. We’re also going to have to buckle down and find something better again.That’s the beauty of a new challenge. There is room to grow. We’re learning, we’re novices. It’s kind of neat to see everybody trying to conquer it on their own, and that’s the beauty of all the engineers and ingenuity in this class. As the fuel injection becomes more popular and faster on the racetrack, it’s going to be a fun ride.I feel honored to be the recipient of the first trophy in the fuel-injected era, and maybe we can get a few more this year. You can’t have an advantage on the field if you don’t start with an advantage, and we started with one.We’ll see if we can maintain it and how long we can hang onto it.”

Q: Why weren’t you confident going into the final?

A: For the first time all day long I didn’t feel I had the better race car than the guy in the other lane. I felt I had a superior car all weekend long until I lined up against my own teammate in the final. He has as good as equipment as I’m driving,so I know he could run every bit as fast or gone faster than mine so it’s a different mindset. Then it all falls back in the driver’s lap. I got a great light in the final and got it done.

Q: No problem with the shifting?

A: No, the shifting is great. Like I said earlier, the drivability of the car is the biggest challenge. Doing the burnout, getting the car staged smoothly. Once you get in to wide open throttle they’re great. You wouldn’t know anything is different. You got to be able to do it the same every time. You have to be able to do a perfect burnout. You got to be able to stage the car perfect or it doesn’t matter what happens during the shifting process. It’s every bit as important as what the car does at wide open throttle. We’re all working on it. We all got better through the weekend,and hopefully we’ll be better again when we get to Phoenix.

Q: Do you think the shifting caused some problems like (Vincent) Nobile’s (incident)?

A: I think Nobile just wanted to win bad and he stayed in the car too long. It got a little too aggressive and it spun and shook the tires. When it’s race day, he was racing a teammate. It seems when we race teammates we want to beat them more than anybody.

Q: With the new EFI, it’s a level playing field and learning curve?

A: Everybody has a steep learning curve. I wouldn’t know who to put my money on. I feel great about the effort we’ve put in so far. It could be a completely different ballgame by the time we get to Phoenix. There’s just so much more to learn about it. We’re just scratching the surface on what this thing can do. It is a new challenge, but we love challenges.

Q: What about the visibility?

A: The visibility is great.I’m all for it. My eyesight isn’t what it used to be. We drag racers, I think we drag race because we don’t have that great an attention span. That’s why we can only make it 4, 5, 6 seconds down there. Distractions will come into play. We’ll be looking the grandstands and notice things we never noticed before. It’s another new challenge.

Connect with Team Chevy on social media. Like us on Facebook at facebook.com/TeamChevy, follow us on Twitter @TeamChevy, and add +TeamChevy into your Google+ circles.
Team Chevy racing photos are available at: http://media.gm.com/product/public/us/en/gmracing/photos.html
About Chevrolet
Founded in 1911 in Detroit, Chevrolet is now one of the world’s largest car brands, doing business in more than 115 countries and selling more than 4.0 million cars and trucks a year. Chevrolet provides customers with fuel-efficient vehicles that feature engaging performance, design that makes the heart beat, passive and active safety features and easy-to-use technology, all at a value. More information on Chevrolet models can be found at www.chevrolet.com.