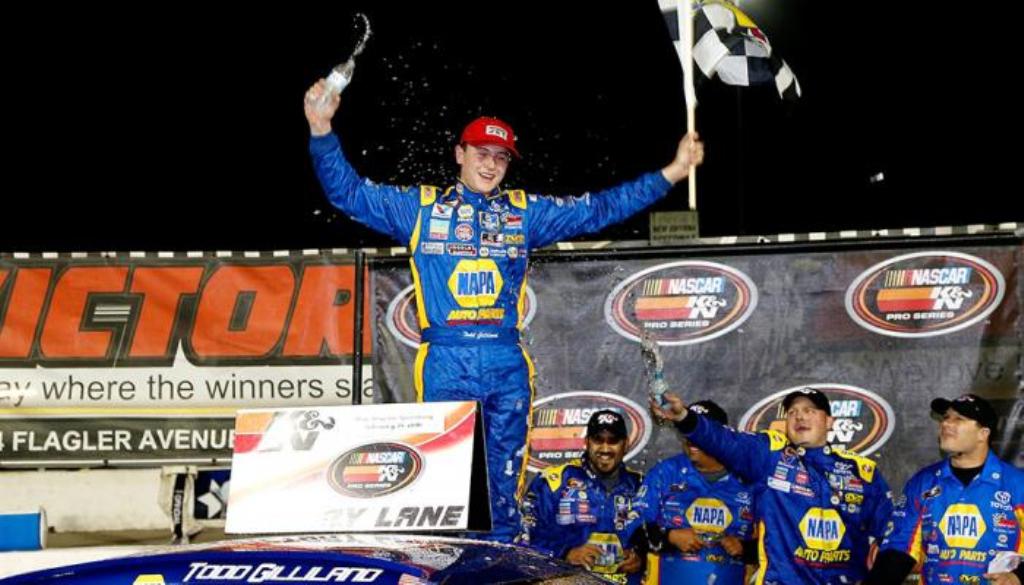 NEW SMYRNA BEACH, Fla. — Third-generation racer Todd Gilliland could not have scripted a better start to his own NASCAR career.

Gilliland, the son of NASCAR Sprint Cup Series veteran David Gilliland, ended up the winner Sunday evening after some late-race drama. Gilliland’s No. 16 NAPA Auto Parts Toyota led at the start-finish line at the completion of Lap 150, the scheduled distance of the event, but racing continued for a subsequent lap due to a delay in displaying the proper flags from the flag stand.

In the ensuing circuit, Ronnie Bassett Jr. crossed the finish line first after contact with race leaders Spencer Davis and Gilliland. However, per the NASCAR K&N Pro Series East Rule Book, the official finish of the race reverts to the completion of Lap 150, the advertised distance of the event.

A native of Sherrills Ford, North Carolina, Gilliland recorded the 21 Means 21 Pole Award by Coors Brewing earlier in the evening while the Canadian Van Wieringen qualified third, the highest mark for a female driver in the series’ 30 years of competition.

The NASCAR K&N Pro Series East will return to action on Saturday, March 12 with the inaugural Mobile 150 at Mobile (Alabama) International Speedway.