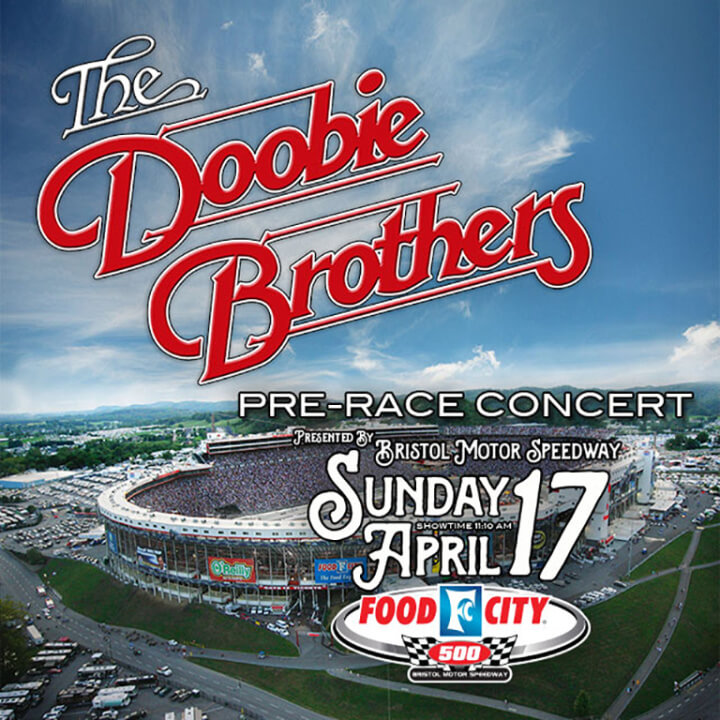 BRISTOL, TENN. (Feb. 15, 2016) – Race fans attending the Food City 500 are in for a treat as they “Listen to the Music” during The Doobie Brothers Pre-Race concert on Sunday, April 17 at Bristol Motor Speedway.  The four-time GRAMMY Award-winning band will bring their powerhouse rock n’ roll to one of NASCAR’s biggest races. With iconic hits such as “China Grove,” “Long Train Runnin,’” “Listen to the Music” and “Black Water,” The Doobie Brothers will get the race day party started.

“We can’t wait to see the Doobie Brothers’ energetic performance at the Food City 500 pre-race concert,” said Jerry Caldwell, executive vice president and general manager for Bristol Motor Speedway. “They are an American musical institution with many songs guests will recognize and sing along to; it will be a memorable experience for everyone.”

The Doobie Brothers are excited to perform at Bristol, before they head off on their 50-city, co-headlining “San Francisco Fest Tour” with Journey and special guest Dave Mason this summer.

Tom Johnston notes, “We are looking forward to playing for NASCAR in Bristol. Race fans know how to have a good time!”  Patrick Simmons adds, “We love the atmosphere of competition racing, and the folks who come to these events. The anticipation and electricity in the air, as well as the camaraderie of the fans and competitors, always make these races special, and a great experience for all those who attend. I know our music will fit right in there with the whole spirit of the event. We can’t wait to get there!”

Tickets are currently available for race weekend by visiting BristolTix.com or calling (855) 580-5525. While supplies last, Food City 500 ticket holders may add on a pre-race SuperPass and be stage-side (on the track) for the concert featuring The Doobie Brothers. The SuperPass also includes a Track Walk and track access for Bristol’s wildly popular Food City 500 Driver Introductions.

With a crowd capacity in excess of 150,000, the facility is expected to set a new NCAA college football attendance record on Sept. 10, 2016, when the racetrack transforms into a football stadium and plays host to border rivals, the University of Tennessee and Virginia Tech. The speedway property is also home to Bristol Dragway.

The historic drag strip celebrates its 51st anniversary this year, headlines with the NHRA Thunder Valley Nationals and operates more than 70 event days each season. In 2015, the Bristol Chapter of Speedway Children’s Charities, a 501©(3) nonprofit organization, awarded a record-breaking $805,900 to regional children’s charities bringing their 18-year total to nearly $10 million in grants.

In existence since 1961, Bristol Motor Speedway was purchased in 1996 by Speedway Motorsports, Inc. a publicly traded company that is a leading marketer and promoter of motorsports entertainment in the United States. For more information, visit the company’s website at bristolmotorspeedway.com.

About The Doobie Brothers

THE DOOBIE BROTHERS have been delivering mind-blowing, roots-based, harmony-laden, guitar-driven rock and roll for over four decades, selling more than 48 million albums and winning four GRAMMY® Awards. They released their latest album, Southbound, in November 2014 on Arista Nashville. Southbound features new recordings of the band’s biggest hits, with country music’s biggest stars including Blake Shelton, Zac Brown Band, Brad Paisley and Toby Keith. Boasting one of the most loyal fan bases in music, the band continues to write and record new material and tour the world.  Their No. 1 singles “Black Water” (1974) and “What a Fool Believes” (1979), both gold, lead a catalog of indelible songs that include “Listen To The Music,”  “Jesus Is Just All Right,” “Rockin’ Down the Highway,” “Long Train Runnin’,” “China Grove,” “Take Me In Your Arms,” Takin’ it to the Streets,” “Minute by Minute,” “You Belong to Me,” “The Doctor” and more.  In all, the Doobies have tallied-up five top 10 singles and 16 top 40 hits.  Beginning with their multi-million-selling sophomore collection Toulouse Street (1972), the Doobies have 3 multi-platinum, 7 platinum and 14 Gold albums. Their Best of the Doobies (1976) has sold more than 12 million copies – a rare “diamond record.”