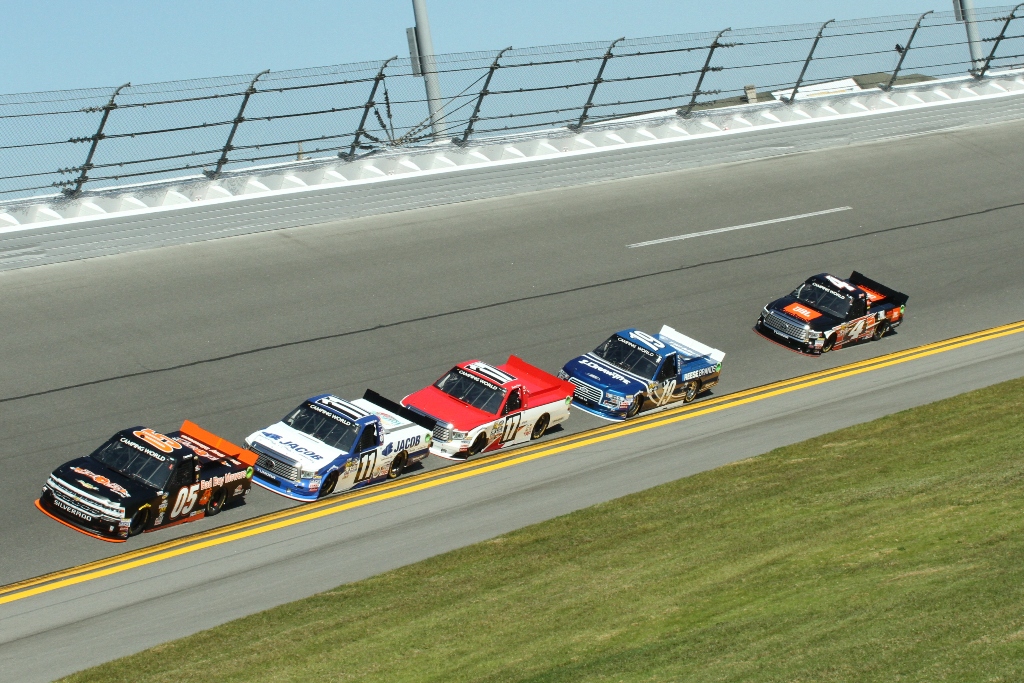 For the first time thus far in Daytona Speedweeks, the stars of the NASCAR Camping World Truck Series took to the track for practice.

A familiar face would find himself at the top of the charts at the end of practice as past Daytona winner Timothy Peters posted the quickest speed at 47.612 mph. While returning to Red Horse Racing, he will have a new crew chief on top of the pit box in the form of Shane Huffman.

While a familiar face rode the top of the charts, the rest of the top-five is all about new faces and changes.

GMS Racing teammates Grant Enfinger and Johnny Sauter rounded out the top-five. Enfinger makes the move up to the Truck Series after running the ARCA Racing Series the past couple of years, while Sauter joins the organization after spending the past several years at ThorSport Racing. Sauter will have experience on the pit box, in the form of Marcus Richmond whom worked with Peters last season.

“Our Chevrolet is really fast,” he said. “We just did a simulated mock run by ourselves and I thought we were clear, and ran a pretty good lap. Can’t thank the guys at GMS Racing enough for the hard work they put into this truck. This is going to be fun. We have a lot of speed and it feels really good in the draft.”

“Our Cabinets by Hayley Tundra is really strong,” Hayley said. “It handled really great in the draft so far. It’s hard to get a feel of what we had, but it felt good in the small draft. Couldn’t be more excited to be back here and have to thank Duke and Rhonda Thorson. ……There’s not a whole lot that the drivers can do. I think we showed a lot of speed early on practice in here and will be fine.”

Unfortunately, practice didn’t go as everyone would’ve hoped as Scott Lagasse Jr. would run over a piece of debris in the first seven minute, causing the right front tire to go down. As a result, his truck would suffer heavy right front damage, in which his NTS Motorsports team is working on repairing.

“It sucks to start the day like this,” he said. “I was just trying to start things off and get up to speed, and we ran over something and the tire went down and tore it up. It just sucks that it happened. We’ll try and regroup and go from here.”

The NASCAR Camping World Truck Series drivers will get one more chance to hit the track from 4 p.m. to 4:55 p.m. EST before qualifying and the race on Friday.