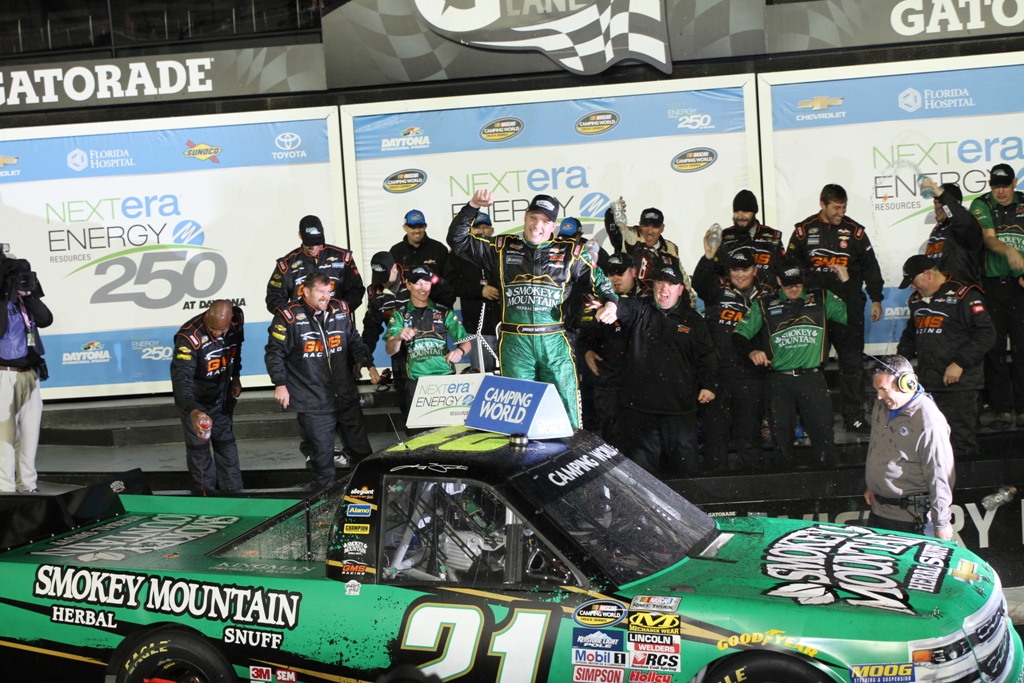 Johnny Sauter made history on Friday night at Daytona International Speedway by being the first driver to lock into NASCAR’s Chase playoff format in the Camping World Truck Series by edging Ryan Truex to win the NextEra Energy Resources 250.

The win marked Sauter’s second win at the World Center of Racing and first with his new team GMS Racing. Sauter’s excitement was obvious in victory lane.

“I knew there was seven laps to go with the red flag and I didn’t know how they were going to play it out. Man, I’m so pumped up. I want to thank everyone at GMS Racing and Chevrolet – it’s their first win at Daytona. I’m so glad to be back in a Chevrolet,” said Sauter. “Everybody at GMS – they’re unbelievable. The 4 truck for pushing me. He was pushing me, fell back and then pushed me once again and got us up there. I’m just pumped up”.

“When you make a switch and have a new team and all this pressure – Maurice Gallagher has given us everything to win every race and I have a driver to win every race, and I just want to thank everyone at GMS for their hard work. Tab Boyd up there and Johnny Sauter won this race,” said Sauter’s crew chief Marcus Richmond.

Ryan Truex appeared to be headed for an upset win as he kept his No.81 Toyota upfront for most of the evening, but had the race slip from his grasp on the final lap when the caution flew. Truex’s disappointment was evident post race.

“I lost my helper…my pusher. Cameron Hayley was pushing me really well,” said Truex. “I don’t know who pushed me to the lead, but thank you. this truck wasn’t a truck a month ago and I didn’t have a ride two weeks ago and we’re here. It’s tough not to win, but I think we are going to get us one this year and run for a championship”.

The caution flew on the last lap following a wild ride by Christopher Bell going into turn one that saw him flip over 10 times. As the field went into turn one, Brandon Brown made contact with Christopher Bell, causing him to bounce off of Timothy Peters, before getting into the wall and flipping over.

It wasn’t the only incident on the night as the race was delayed by a twenty seven plus minute red flag when a crash on lap 92 saw an eighteen truck pileup which took out many of the race favorites. Among those taken out were Cameron Hayley, Daniel Suarez, Rico Abreu, Tyler Reddick, Cole Custer and John Wes Townley.

“I’m alright. Our Tundra was really amazing tonight,” said Hayley. “We could get to the front and stay up there. It’s hard racing right there. We just caught bumpers and went around there. It sucks but it’s Daytona in trying to make moves and bump. We’ll regroup and go into next week”.