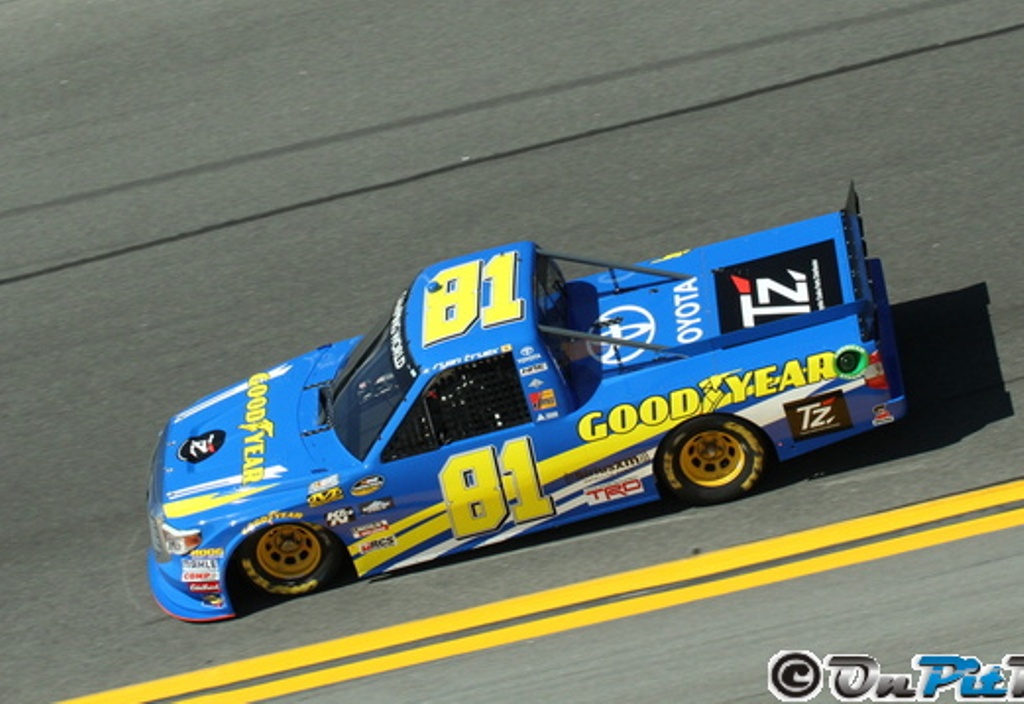 Racing up front throughout the NextEra Energy Resources 250 at Daytona International Speedway, it seemed that Ryan Truex was poised to have a successful night in his first run driving for a small team led by Shigeaki Hattori.

Though, he wasn’t set to settle for that, taking it to the next level as the race neared conclusion.

Truex put the No. 81 Goodyear truck into the lead, fending off both sides of the street as the laps continued to clock down. A late caution would set him side-by-side with Johnny Sauter, in where the pair battled back and forth.

In the end, though, Truex came up mere inches on victory as when the caution flew on the white flag lap for Christopher Bell’s flip, Sauter had taken the lead by a nose.

“If that wreck wouldn’t have happened I think we had him,” he stated. “The bottom was just the place to be all day.  It seemed like you could hook up and bump draft to the front.  It was really hard to do and there was a lot of guys that couldn’t do it properly.  The 13, (Cameron) Hayley, really pushed me well and got me to the front and kept me there.  So I’ve got to thank him for that.

“But yeah, it just all came down to who could bump draft the best without locking up and stay out there, and the side draft on the top was huge, too.  So you just had to make the right moves and be there at the end and we were, and unfortunately it just didn’t end up in our favor.”

For Truex and Hattori Racing Enterprises, it’s a huge boost as they search for sponsorship. The confidence boost was heard in Hattori coming over the radio post-race to Truex and congratulating him on a successful run. The team intends to run the full schedule and battle for the championship, but has yet to find funding for all of the events. Truex stated post-race that they will be at the next two races and other events through the year, but there are still open spots on the calendar.

“At first it just looked like Daytona but the more we got to talking, the more we were going to try to run a full season,” he stated in the media center following the race. “Obviously we have a few races to fill out, but tonight helps out a lot.  You think about it a lot and you wonder what you’re going to do. My option is go work on a clam boat for my dad and I refuse to do that, so that’s why you see me at the race track every weekend.”

Though beyond that, it’s also boost towards Truex’s career. After limited success in the XFINITY Series, the 23-year-old was thrown into the Sprint Cup Series two years ago. It didn’t turn out to be a successful venture as he finished 39th in points and failed to qualify for three of his 25 scheduled starts. The result was Truex being left on the sidelines without a ride, as many wondered whether he could cut it.

Truex admitted that if you would’ve asked him a month ago whether it’d be possible to on the podium at a Camping World Truck Series event, he wouldn’t had believed it was possible. He stated that it’s easy to get down on yourself and it seems harder to find rides as everybody is looking at that next young talent, especially with the truck series age limit lowered to 16 for tracks shorter than a mile and a half.

“That’s what we did this weekend, and it worked out for us.”