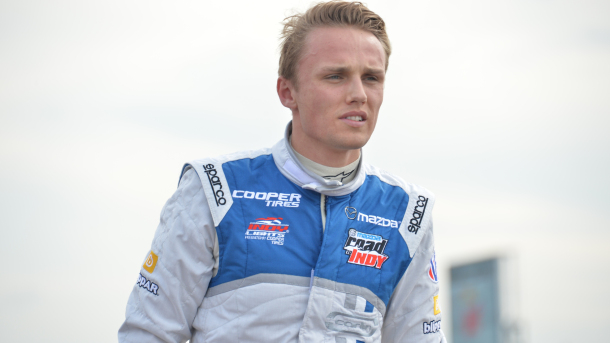 As the Indianapolis Motor Speedway is currently buzzing as the 100th running of the Indianapolis 500 mile race is now less than 100 days away, it is time to look towards a driver who could claim the coveted Rookie of the Year honor after the checkered flag falls on May 29th, along with perhaps the same title for the Verizon IndyCar Series as a whole. Although limited in exposure to most open wheel racing fans in North America, the pairing of British newcomer Max Chilton with the dominant Chip Ganassi Racing team in their No. 8 Chevrolet for 2016 could spring a few head turning surprises.

Chilton’s presence with CGR is not the first time that the former driver from Pittsburgh, Pennsylvania has called upon the Formula One World Championship or its upper rungs on the pyramid to reaching it for a driver. F1 brought CGR its first pilot in future Indianapolis 500 winner Eddie Cheever, Jr., its second snapped up Michael Andretti for its first two wins in 1994, and its third and fourth reaches into the F1 circus grab bag brought in future CART series champions in the form of Italian Alex Zanardi and defending Indy 500 champion Juan Pablo Montoya, who also won the 500 for Ganassi in the year 2000. It is not to say that Chilton will reach the same platforms gained by these CGR legends, or the heights reached by more recent stars Dario Franchitti and Scott Dixon for that matter, but Chilton’s efforts in the Cooper Tires Indy Lights Series a year ago, certainly showed glimpses of what he could achieve.

The 24-year old, driving for Carlin Motorsport, placed fifth on the final points table in 2015, through the strength of a victory at Iowa Speedway and nine other top five finishes. The final placing for Chilton is even more impressive when one factors in that he missed three events due to his commitments to the Nissan LMP-1 sports car project at the 24 Hours of Le Mans last year.

Having reached the top level of motorsport two seasons ago with the former Midland F1 team, Chilton was admittedly impressed by the ability of the Dallara DW12 IndyCar during recent private testing with Ganassi as he prepares for his IndyCar Series debut at St. Petersburg, Florida.

“It’s an amazing (race car).” said Chilton during an IndyCar conference call earlier this week. “I knew they always had an amazing amount of downforce. They performed better in the corners, better than I expected.”

In addition to coming to grips with the new race car type, Chilton appears to be fitting in well with the other three members of the Chip Ganassi Racing squad, despite only being with the team for less than a month and with only test efforts at the Sonoma Raceway road course and at the fast Auto Club Speedway tri-oval under his belt.

“Tony, Scott and Charlie, are so welcoming.” explained Chilton. “Scott is four times (IndyCar) champion. They’re willing to help as much as I need to sort of get me settled in learning the ovals and any tips I need. Even Tony came all the way down to L.A. just to do an eight-lap run at the start of the day on my Fontana test last Saturday. That’s amazing to have teammates like that already.”

The addition of the ex-Formula One driver provides decent competition for the Verizon IndyCar Series rookie of the year battle between Chilton and Conor Daly. There is a kind of strength and weakness that is present on each end of the scale. The inexperienced on oval tracks Max Chilton is paired however with one of the two strongest teams on the circuit, if going by recent IndyCar Series season results. By contrast, the more oval track savvy Daly is paired up with the at least weaker on paper Dale Coyne Racing operation, a team that of course the late Justin Wilson proved on multiple occasions can win races. Although the temptation at first glance would to tilt the balance toward Daly for the new driver honor, a solid effort on the mix of airport runway and city streets in St. Pete by Chilton could equalize the duel over the following 15 rounds of this intriguing fight.

Stay tuned to OnPitRoad.com for further Verizon IndyCar Series driver previews as the countdown to the 2016 season continues.