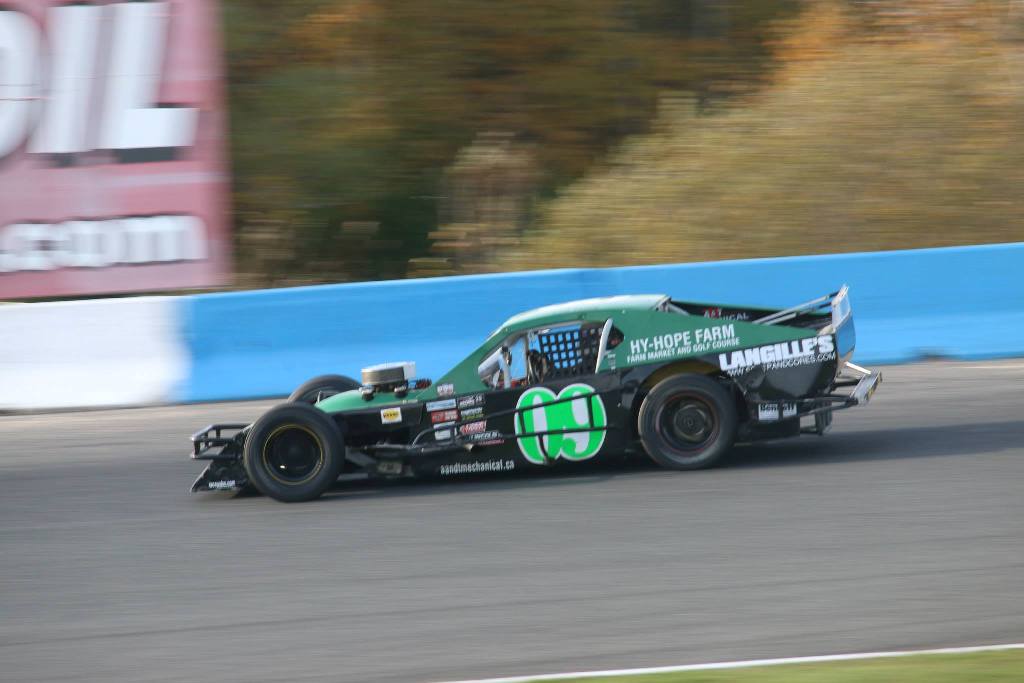 Even though the race season may be over 50 days away doesn’t mean that work on cars isn’t in full swing as drivers are getting set for the new year, including Dan Price.

“My car has received quite a number of changes that I hope will be changes in the right direction,” he said. “I’ve hung a new body on it and it’s looking great.”

Following a solid rookie season in the OSCAAR Modified division that resulted in an eighth place finish, Price is set to return to the series once again this coming season.

“The plan will be just to race as often and at as any places as our budget will allow with the OSCAAR series being our main focus,” he said. “I’m going to miss two races in July, one being the Chase for the Colours, and Kelly Balson was the obvious choice for those couple of races.”

It’d only seem fitting to have Balson run the Chase for the Colours event at Peterborough Speedway, given how he is a previous track late model champion and past winner of the Autumn Colours Classic.

Beyond the focus on OSCAAR, Price has other plans for the modified this season, stating that he already has commendations booked in Sauble Beach so will be at the Rick Woolner Memorial, while having plans to run the invitational at Delaware Speedway, as well. Though beyond the races north of the border, Price mentioned that he could quite possibly be heading to the United States for some select events.

“I’m really looking forward to getting back to Kalamazoo and especially with this car,” he said. “We’re preparing to also run at least one big SK lite show in the fall in the US, possibly the World Series at Thompson (CT) but most likely it will be the Turkey Derby at Wall Stadium (NJ) in late November.”

Last season behind the wheel of his modified, Price scored four top-10 finishes, highlighted by a fourth place finish at Sunset Speedway in August.

“I put myself in some poor positions last year and as a result suffered to many DNF’s,” he said. “I need to be there at the end more often – end of story. It’s still a learning time for us with this car; improved results will come from track time and not throwing away resources repairing the car. I’m quite pleased with some of our on track performance last year and we need build on that. I hope to be able to come up with enough money to have the car at all the points races and if we can do that, an improvement on last years eight in points is the goal.”

Though in trying to improve in points, Price will have to tackle the new OSCAAR points system, as they have gone with a Chase elimination format, just like the top-three NASCAR Series have done.

“I’m a bit of a purest, I like the traditional points structure where a team is rewarded for their performance on the season as a whole,” Price commented. “But who knows. This may add some excitement to the championship battle for the fans late in the season and that’s the intent.”

While the modified is the focus, Price plans to also put some effort back into his thunder car, which has caught eyes of many with it’s uniqueness. While many drivers and teams have chosen to build cars based off of the 1970 Camaros and Chevelles, Price went with a 1957 Chevy.

“My Thunder car is getting put back together with no definite plans for it at this time, but it’ll probably turn up later in the season with me most likely wearing my car owners hat on that deal,” he stated.

With big plans, there’s no doubt that funding is part of the key to making them all happen together. Price welcomes any interested marketing partners to contact him, which he can be reached via his Facebook fan page at https://www.facebook.com/danpriceracing09/?fref=ts.