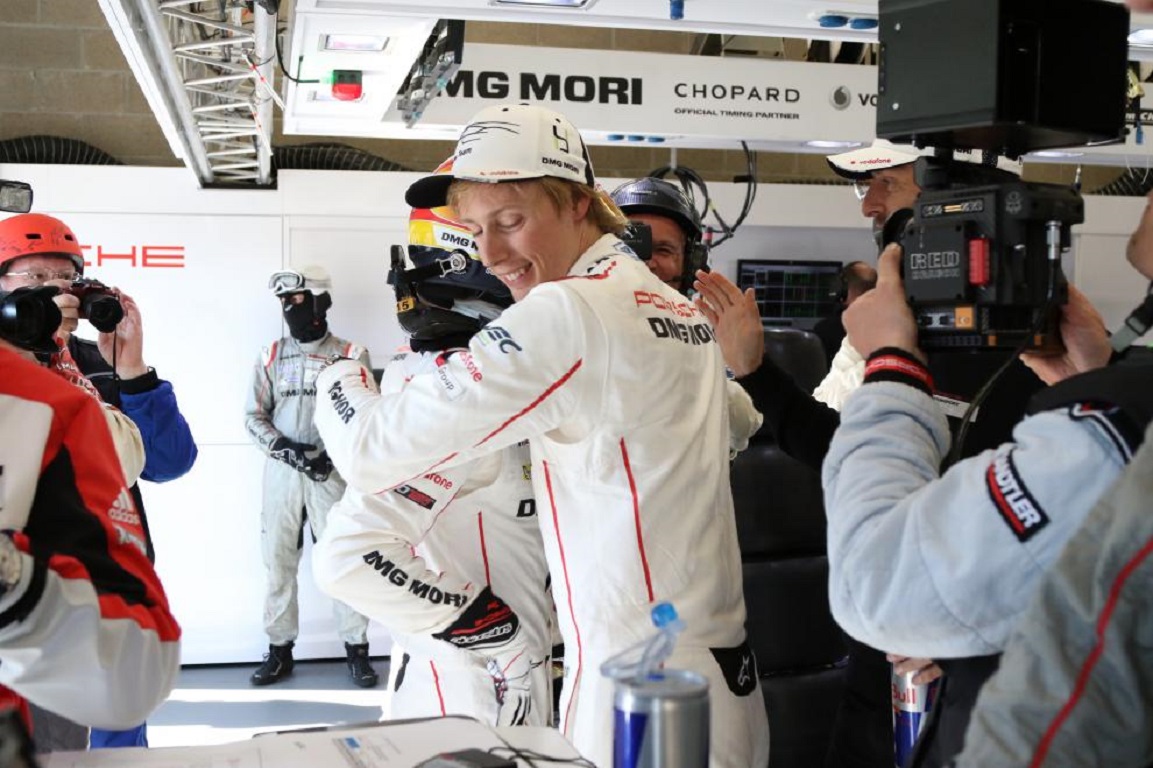 After getting stunned by Audi Team Joest last month at Silverstone in the season opening qualifying session for the 2016 FIA World Endurance Championship, Team Porsche regained their footing as the fastest runners among the LMP1 hybrid prototypes over the cross of a single lap on Friday as Brendon Hartley and Timo Bernhard teamed up to secure the pole position for Saturday’s Six Hours of Spa Francorchamps in Belgium.

Posting an aggregate average lap time of one minute, 55.793 seconds on the challenging 4.352 mile, 20 turn layout, Hartley and Bernhard took the top spot by seven tenths of a second over their 919 Hybrid teammates Neel Jani and Mark Lieb. The No. 2 Porsche entry of Romain Dumas, Lieb, and Jani took the overall win at Silverstone, but only after Audi Sport Team Joest was excluded from the final results following a ride height infraction found during post race technical inspection. The sister No. 1 entry is looking to bounce back after being eliminated via a crash while leading the event, when Hartley collided with Gulf Racing UK driver Michael Wainwright.

After qualifying behind both Audi and Porsche in England, Toyota Gazoo Racing managed to place one of their two TS050 Hybrids on the inside of the second row after Kamui Kobayashi and Stephane Sarrazin edged the No. 8 Audi Sport R18 e-tron Quattro coupe of Lucas di Grassi and Loic Duval by only two hundredths of a second via aggregate time. Toyota and Audi will also hold the same inside and outside positions on row three for their sister entries for Saturday’s start.

Among the non-hybrid LMP1s, Rebellion Racing continued their domination of the second race weekend of 2016 by going 1-2 in Friday qualifying, with its lead car nearly two full seconds up on the lone Colin Kolles-entered CLM coupe. Attrition allowed Rebellion to reach the overall podium last month at Silverstone and the Swiss-based squad is hoping for a similar result on Saturday.

In LMP2, G-Drive Racing’s ORECA 05 coupe claimed the top place on the starting grid, with Rene Rast and Roman Rusinov combining to post a two minutes, 7.363 second aggregate to secure class pole by just over four tenths of a second. A rebadged ORECA 05 under the Signatech Alpine’s A460 tag completes the front line with Stephane Richelmi and Nicolas Lapierre teaming up to claim the placing. After posting the top time in practice on Thursday, Manor Racing’s No. 45 ORECA fell to third in LMP2 qualifying, with ELMS Four Hours of Silverstone winners Jota Sport/G-Drive placing their Gibson open top prototype in fourth.

In GTE-Pro, AF Corse has the upper hand over Prodrive Aston Martin Racing placing its two Ferrari 488 GTEs in positions one and two on the grid, with Sam Bird and Davide Rigon taking pole with a two minutes, 17.644 second combined average. Teammates Gianmaria Bruni and James Calado were a further three tenths of a second back, with the lead AMR Vantage V8 of Richie Stanaway and Jonny Adam only a further three one hundredths of a second behind the second AF Corse Ferrari in position number three. Chip Ganassi Racing’s two Ford EcoBoost GT are in a strong position as well, qualifying fourth and fifth on Friday. CGR earned their first win with their new challenger last week at Mazda Raceway Laguna Seca in IMSA WeatherTech Championship competition.

While falling short in Pro, Prodrive rebounded to take the top spot in the Amateur class with Paul Dalla Lana and Pedro Lamy taking the honors at a two minutes, 20.351 second average. The AF Corse entry of Emmanuel Collard and Rui Aguas will start second, with Larbre Competition’s Chevrolet Corvette C7.R closing out the first three on the grid.