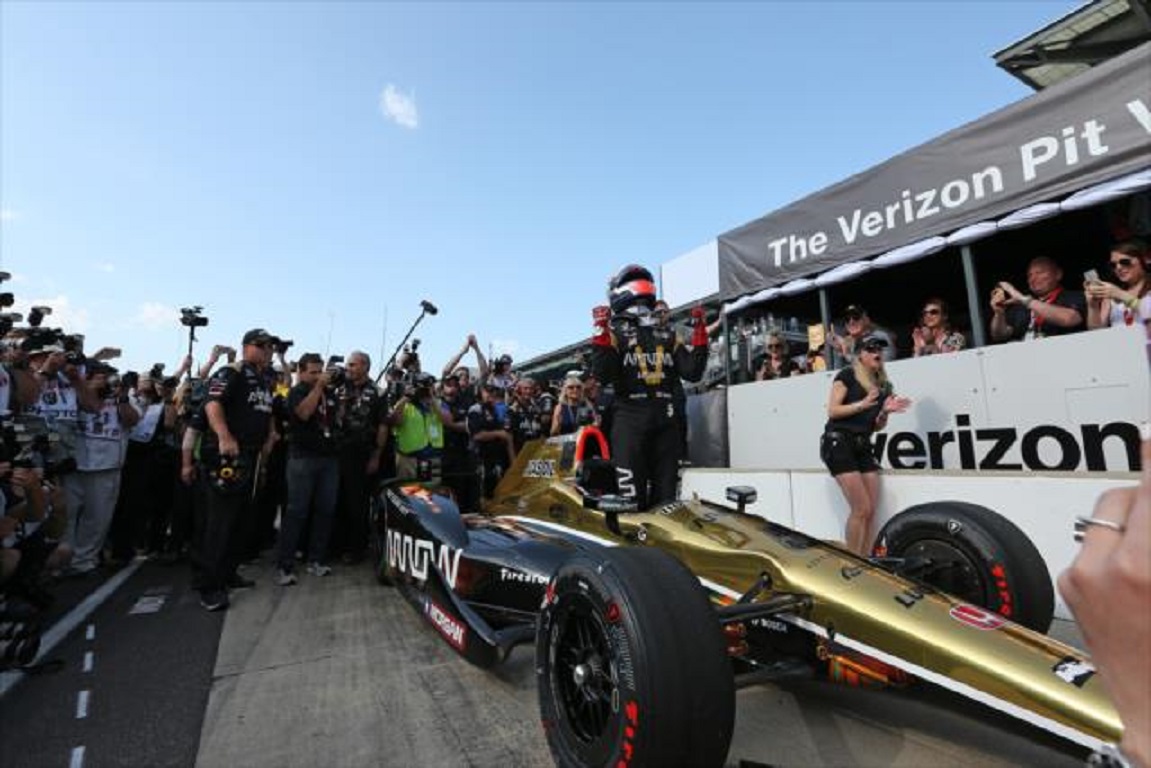 Armed Forces Day Sunday at the Indianapolis Motor Speedway, started with paralyzed former IndyCar driver Sam Schmidt posting a four-lap average on the famed 2.5 mile oval at over 105 MPH with a Chevrolet Corvette optimized for him to drive with head and mouth movements. Who knows if it had a future effect or not, but hours later his team’s No. 5 Arrow Electronics Honda, driven by the popular Canadian Verizon IndyCar Series driver James Hinchcliffe overcame the odds to win the pole position for next Sunday’s 100th running of the Indianapolis 500, presented by PennGrade Motor Oil.

After securing the top seed for the Pole Day Shootout with the fastest four-lap average posted on Saturday, the Schmidt Peterson Motorsports driver posted four consistent laps at an average speed of 230.760 MPH Sunday, just enough to edge Josef Newgarden of Ed Carpenter Racing for the top spot by only six one hundredths of a mile an hour. The effort was even more impressive considering the fact that Hinchcliffe had not taken to the track in the 30-minute practice prior to the start of qualifications on Sunday.

The Verizon P1 Award is just another step forward in the comeback story for the driver known as the “Mayor of Hinchtown.” The pole position win comes just 366 days after the Canadian veteran survived near fatal injuries suffered during a practice crash at the Speedway on the Monday after qualifications for last year’s race.

While Newgarden posted the fastest lap of the shootout session at 231.550 MPH, the driver of the No. 21 Preferred Freezer Services Chevrolet was not as consistent over the course of four laps as Hinchcliffe was, posting a 230.700 MPH average and would settle for second. After the General Motors brand claimed the top five starting spots for last year’s Indianapolis 500-mile race, Honda has countered their engine and aerodynamic kit rival by placing four cars in the first five positions for this year’s race.

After Hinchcliffe and Newgarden, 2014 Indy 500 champion Ryan Hunter-Reay of Andretti Autosport would complete the front row posting an equally strong 230.647 MPH average. Hunter-Reay who took to the track just before Hinchcliffe in the shootout, had a speed faster than Newgarden after three laps, but was unable to stay ahead when he took the checkered flag. The outside front row position for Hunter-Reay matches his career best starting spot in the Greatest Spectacle in Racing, as he also started third in 2012.

The second row of the grid will feature Hunter-Reay’s Andretti Autosport teammates Townsend Bell and Carlos Munoz and last year’s Indy 500 runner-up Will Power from Team Penske. Bell, who only competes once a year in the Verizon IndyCar Series at the Indianapolis 500 and Munoz, who started on the front row at Indy in his first ever IndyCar Series race, both managed to post four laps in the 230 MPH bracket. Power meanwhile, who posted the fastest speed of the month at over 232 MPH on Friday, could only manage one lap above 230, before falling into the 229s on his final three laps.

Hinchcliffe’s Schmidt Peterson Motorsports teammate Mikhail Aleshin, qualified for the inside of row three and will be joined by two other Team Penske drivers in current Verizon IndyCar Series championship leader Simon Pagenaud and three-time Indy 500 champion Helio Castroneves. Spain’s Oriol Servia placed a third Schmidt car in the top ten, as he was the fastest in the consolation qualifying session earlier on Sunday.

Among other notables on Sunday, Chip Ganassi Racing’s Scott Dixon bounced back from a blown engine suffered in the Sunday morning practice session to qualify 13th. The Target Chevrolet team managed to change engines on Dixon’s car in under two hours to allow the 2008 Indy 500 champ an opportunity to post a time, a usual task that normally takes between three to four hours in normal situations. Team Penske’s Juan Pablo Montoya was given a second attempt to qualify on Sunday after his initial run was hampered after he ran over a trash bag that found its way onto the track in turn one. Montoya rebounded to qualify 17th, two notches behind where he started a year ago when he won the event.

The only accident on Sunday happened in the consolation session when AJ Foyt Racing’s Alex Tagliani spun out of turn four coming to the start of his qualifying run. The Al-Fr Honda missed the outside wall, but spun across the track eventually striking the attenuator at the head of the inside pit wall. Tagliani walked away from the crash without suffering injury, however he will have to start 33rd next Sunday.