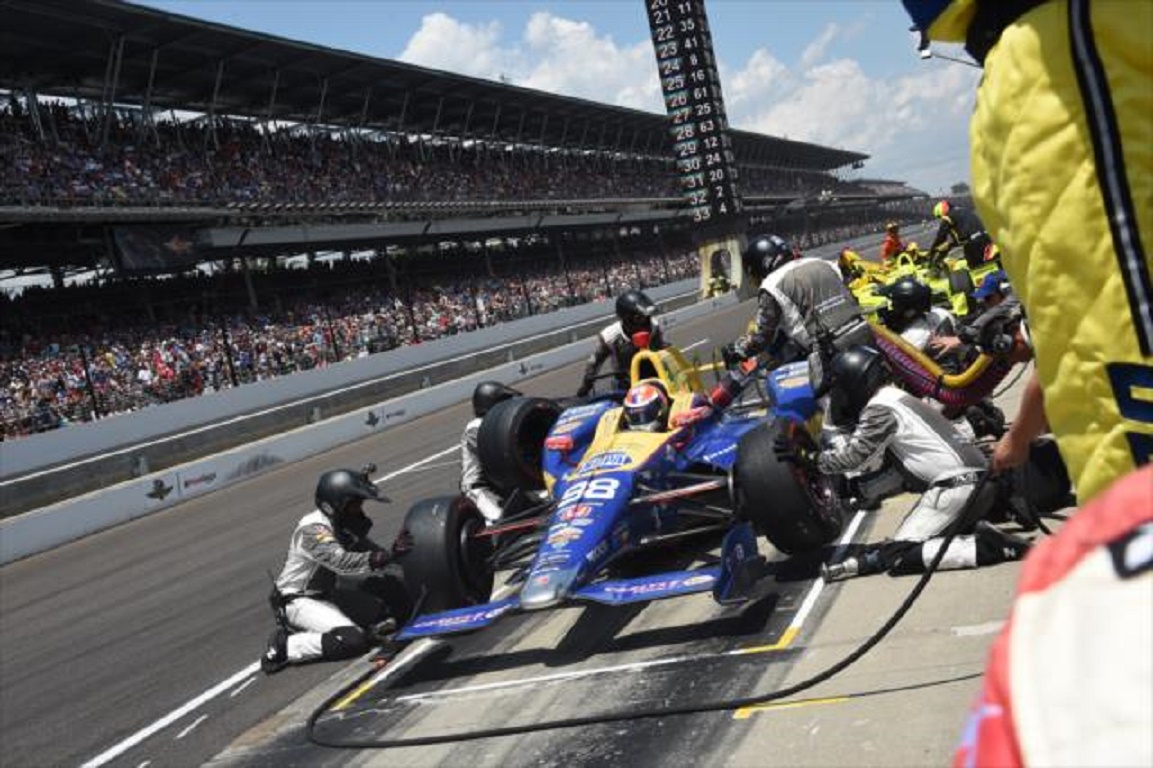 Five years ago at the Indy 500, part-owner of Dan Wheldon’s winning car, former California Lt. Governor and Nashville music promoter Mike Curb left the Indianapolis Motor Speedway suites in turn two before the race ended, assuming his driver had no chance to win it. Amazingly enough, Wheldon moved from fifth to first in the final two laps to win the race, forcing Curb to pull into a nearby McDonald’s in the town of Speedway and hustle his way by foot to meet his driver in the winner’s circle. On Sunday, during the late stages of the 100th edition of the Indianapolis 500 presented by PennGrade Motor Oil, Curb did the same thing again and well, somehow the same result happened yet again.

Despite qualifying 11th last weekend during time trials,  the best effort among the 2016 Indy 500 rookie class, Andretti-Herta Autosport driver Alexander Rossi was certainly not considered to be a threat to become the first Indy 500 rookie since Helio Castroneves in 2001 to win the event. For one thing, he had four competitive teammates to defeat on Sunday and also drivers from Chip Ganassi Racing and Team Penske to deal with, long considered the best teams on the Verizon IndyCar Series circuit. However, the perfect scenarios for a possible win came into play during the second half of the race, as the favorites hit trouble in various occurrences and fuel mileage maladies wiped out the contenders who were left in Rossi’s path.

Having gone off sequence from the regular runners in terms of pit stops around the 300-mile mark, Rossi eventually grabbed the lead with just three laps to go, yet noticeably dropped off the pace in order to save fuel. However, with the rest of the field, led by Andretti teammate Carlos Munoz and Ed Carpenter Racing’s Josef Newgarden nearly three-quarters of a lap behind, the ex-Formula One pilot was able to nurse his car home at a reduced speed over the remaining distance. Rossi even slowed to a pedestrian 179 mph on the 200th and final lap to secure one of the greatest shockers in the now 100 race history of the Greatest Spectacle in Racing.

In terms of evidence as to how much fuel the California-native had left at the conclusion, Rossi’s No. 98 NAPA Auto Parts Honda ground to a halt in the turn four warm-up lane on the cool down lap and had to be towed by the Holmatro Safety Team to the winner’s circle. Rossi did not seem discouraged by the situation, as he quickly climbed out of the car and saluted the stunned crowd in probably the most fan appreciating celebration since any of the three fence climbs by Helio Castroneves at the start-finish line’s yard of bricks.

The win is the first in six Verizon IndyCar Series starts for Rossi and represents the second Indy 500 win as a car owner for Bryan Herta and the fourth for Michael Andretti. It also puts sponsor NAPA Auto Parts in unique form as having backed cars that have won both the Indy 500 and NASCAR’s biggest race, the Daytona 500.

Behind Rossi, teammate Munoz claimed runner-up honors following a wild duel late with Newgarden, who settled for third. The effort for the Colombian is his second runner-up finish in his first four starts at Indy, while the Tennessee-resident claims his second straight top ten finish after placing ninth in last year’s race.

After running upfront up until the final 25 laps, 2013 Indy 500 champion Tony Kanaan was unable to keep pace with Munoz and Newgarden and finished fourth. Chip Ganassi Racing teammate Charlie Kimball rounded out the top five, backing up his third place run from a year ago.

J.R. Hildebrand placed a second Ed Carpenter Racing Chevrolet in the top six, earning his best result since finishing second to Dan Wheldon in the mentioned above dramatic conclusion to the 2011 race. After running upfront early in the event, pole sitter James Hinchcliffe of Schmidt Peterson Motorsports came home in seventh, with 2008 Indy 500 champion Scott Dixon, Sebastien Bourdais, and Will Power completing the top ten.

For others, Sunday at the Indianapolis Motor Speedway was a day to wonder what might have been. Team Penske’s Helio Castroneves looked potentially poised to join A.J. Foyt, Al Unser, and Rick Mears as a four-time Indy 500 winner. His chances however, were dashed when he suffered damage to his left rear wheel guard after being clipped on the front stretch by Hildebrand, who escaped the contact without damage, nor penalty for avoidable contact. Castroneves finished 11th on Sunday. His Penske teammate Simon Pagenaud fared no better, after being tagged by the race stewards three different times for penalties on Sunday, prior to placing 13th.

The most frustrated driver on Sunday however, could be 2014 Indy 500 winner Ryan Hunter-Reay, who led the most laps in the race with 52. However, the Andretti Autosport driver’s shot for a second Indy win ended during the fourth caution of the race, when he collided with teammate Townsend Bell exiting the pit lane. Both early pacesetters fell a lap down following the shunt and were unable to rejoin the fight late. Neither driver placed in the top 20 at the checkered flag.

With Rossi’s amazing victory now into the record books, the focus shifts toward the remaining ten events on the Verizon IndyCar Series schedule, which resumes next Saturday and Sunday at the Raceway at Belle Isle for the Chevrolet Duel In Detroit.