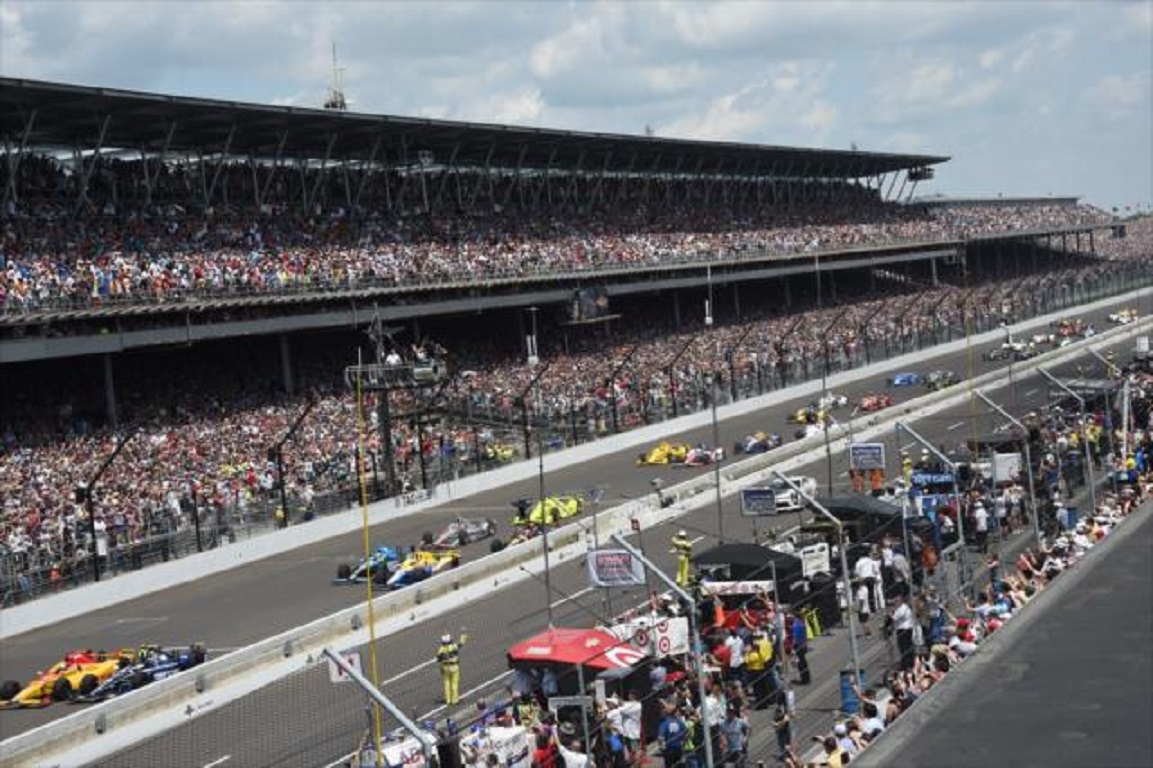 As yours truly settles in to watch the festivities of the Victory Banquet to conclude the month of May for the historical 100th Indianapolis 500-mile race, I think it is time to look back at what happened on Sunday at the World’s Greatest Race Course. Who were the big stories, who made the big blunders, and what influenced the final outcome ending with the surprise win earned by Andretti-Herta Autosport rookie driver Alexander Rossi? Having now attended the race six times, I do not think I have ever left the grounds of the Indianapolis Motor Speedway on race day with any disappointment, and the 100th anniversary running was no different.

What led to the final outcome?: The caution flag caused by Takuma Sato’s race ending brush with the turn four wall on lap 160 threw a real wrench into the fuel plans for several teams. While everyone except J.R. Hildebrand took advantage of the caution to pit, what baffled me was this: if fuel was so major of a concern, why didn’t anyone top off the tank with one to go prior to the final restart? When most including Alexander Rossi pitted, it was with 36 laps to go. Had anyone besides Simon Pagenaud topped off the tank, they would have only had to cover 33 laps to finish instead of 36. At first, that might not make that major a deal, yet the target would be three laps closer to the end, and might have allowed some drivers to join Rossi in the fuel save game successfully. However, unlike Pagenaud who could not take advantage of the late decision due to an engine misfire, someone else like his teammate Helio Castroneves, who lost ground due to damage suffered late in the race, could have made the top off and possibly been able to chase down Rossi who really had to back off his pace during the final two laps to make the finish. dropping to 179 MPH on the last lap.

If some others had topped off the tank, I strongly feel someone other than Rossi could have crossed the flag first and been able to make the distance without a late splash of fuel.

Why were the one-off Indy runners so overly aggressive?: The incidents that eliminated Sage Karam and Townsend Bell, plus the controversial contact involving J.R. Hildebrand and Helio Castroneves were caused by the fact that they have less experience in these type of situations on a regular basis and that they also had less to lose in terms of not finishing than a full-time driver on the Verizon IndyCar Series circuit did on Sunday. Keep in mind, the championship offered double points for this event and with Simon Pagenaud holding a large lead in the championship, I think several drivers who were seriously running for the series title, were less willing to really hang it out as opposed to others. That fact for instance, could explain why Team Penske struggled to get rolling on restarts as both Helio Castroneves and Will Power lost leads before reaching turn one.

Karam meanwhile, had made a solid charge from mid-pack to sixth when he went three-wide on the outside to clear Josef Newgarden and Townsend Bell. The move though came on lap 93 and seemed very early to take such a gamble. In the end, Karam and Bell clipped wheels at the turn one apex and the 21-year old Pennsylvanian found the SAFER barrier. While Bell survived that incident, he was extremely aggressive in terms of overtaking and defending his position throughout the race, much to the chagrin of 1998 Indy 500 champion and ESPN-ABC commentator Eddie Cheever, Jr. Trying to avoid giving up too much track position in the pits, Bell darted around to the outside lane during his lap 118 pit stop and clipped Helio Castroneves before hitting teammate Ryan Hunter-Reay effectively knocking both out of victory contention.

While I have mixed feelings toward the Hildebrand incident in the case of who was to blame, I will say the one-off drivers all had excellent chances to make an impact in Sunday’s race, but due to their own inabilities to control their aggressions, they each ruined their chance to possibly alter history and the final outcome, since all three certainly had cars capable of winning or influencing the finish.

Why did the pit lane cause so much trouble?: Even with pit lane speeds being reduced to 60 MPH, the chances to gain or lose positions means the dash to get to the exit line first or as close to first as possible, led to several of the unsafe release penalties that were issued by INDYCAR stewards Dan Davis, Arie Luyendyk, and Max Papis. While problems such as this occurring at Indy, were not greatly noted in recent years of the Indy 500, the narrowness of the two lanes on the IMS pit section have often been a problem in NASCAR’s Brickyard 400, where the larger stock cars often bounced off each other, damaging equipment and ruining chances to win. The multiple near disasters that occurred on Sunday, should influence some change to the makeup of the pit lane itself. While it may be difficult to increase the width of the pit lane closer to the entrance due to the permanent grandstand and Tower Terrace suites, the temporary grandstands in front of the pit garages could be cleared out to increase space at the exit. The grandstand views are usually obstructed by the pit equipment anyway, so the ability to increase the space at pit exit is present.

Unfortunately, I do not think the unsafe release and avoidable contact penalties will change much next year on race day for the 101st Indy 500. The concern of gaining or losing positions in the race always will take top priority.

How will Rossi fare in the remainder of the season?: Keep in mind, Rossi showed flashes of brilliance in the early stages of the Angie’s List Grand Prix of Indianapolis, so this result was far from coming completely out of the clouds. Detroit will be a benchmark, Rossi does not need to win either race, however if he can post top tens on both Saturday and Sunday, the momentum should carry him to increased consistency and possibly more victories prior to the end of 2016. If that happens, it could encourage Andretti-Herta to re-sign him for 2017 (assuming he does not receive an offer from a Formula One team), and it might even lead to NAPA Auto Parts extending its deal for action beyond just the Indy 500, something the team and IndyCar racing badly needs: the ability to reel in and maintain major brands, whilst adding more to the fold.

Without a doubt, the 100th edition of the Greatest Spectacle was one for the memory books and yours truly cannot wait to do it all over again in 2017!

Disclaimer: Views and opinions are those solely of the author and may not reflect the views of other members of the OnPitRoad.com staff.