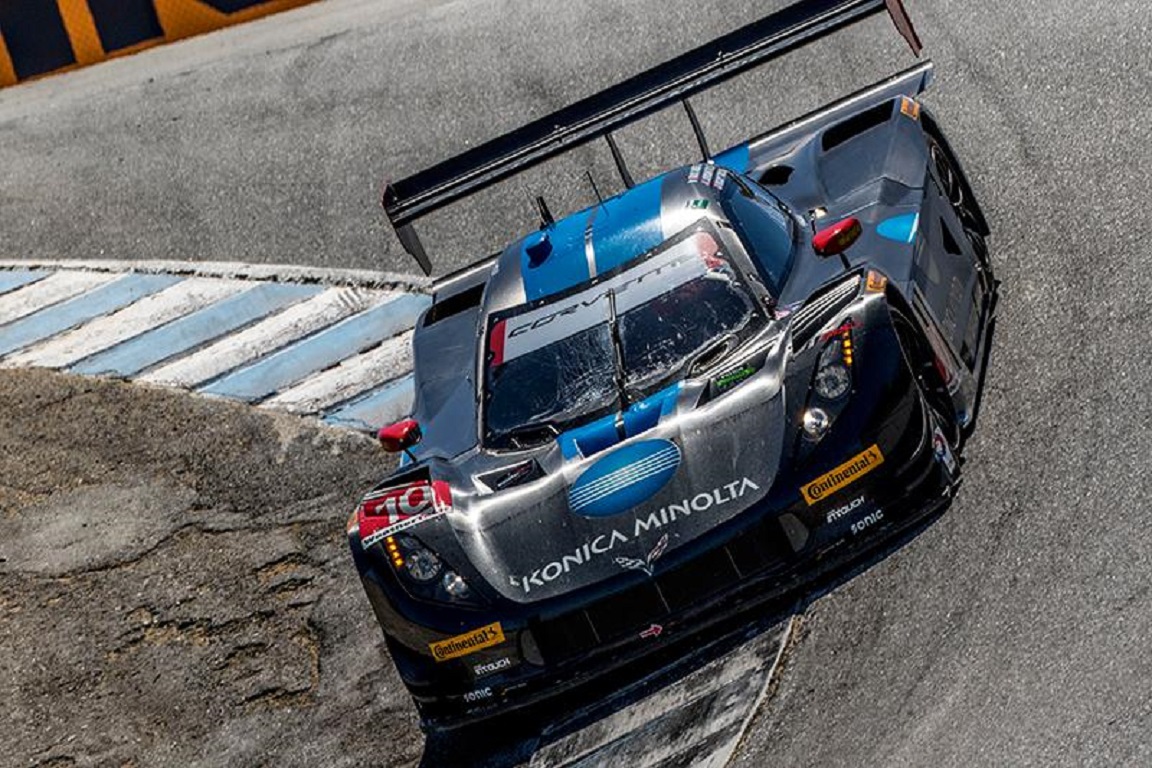 They did not start on the front row, they did not make a pass for the race lead on the road, but the brothers’ act at Wayne Taylor Racing seem to have the Raceway at Belle Isle in Detroit, Michigan figured out as for the second time in three years, Jordan and Ricky Taylor outdueled and outsmarted the competition in the IMSA WeatherTech SportsCar Championship to claim the top step of the podium in Saturday’s Chevrolet Sports Car Classic.

Starting from third on the grid in the 100-minute timed event, older brother Ricky managed to jump to second by outdueling VisitFlorida.com Racing’s Marc Goossens into turn one and managed to maintain the runner-up spot up to the event’s first two full course caution flags. However, it would be the second yellow that would lay out the eventual winning move of the race, as the WTR Konica-Minolta pit crew, outdueled the Mustang Sampling crew of Action Express Racing to put Jordan Taylor into the overall lead.

Although the younger Taylor would never hold a gap of more than three seconds on Action Express’ Joao Barbosa in final minutes of Saturday’s race, the No. 10 Corvette DP driver never gave the Portuguese veteran a window of opportunity to overtake, eventually taking the checkered flag 1.7 seconds ahead. The win is the second in 2016 for WTR and puts them even on the championship table with Barbosa and his co-driver Christian Fittipaldi. Technically however, WTR will head to the next stop on the IMSA tour at Watkins Glen, New York as the championship leader as they hold the tiebreaker with two wins compared to only one for Action Express.

Behind the top two, chaos ensued for the rest of the Prototype division on Saturday, as the other two members of the Corvette DP club hit trouble before the completion of twenty minutes. Having fallen to third at the start, Goossens made light contact with the outer barriers at turn seven, which dislodged the rear wing on his No. 90 VisitFlorida.com Corvette DP. Not realizing his predicament, Goossens went at normal speed before spinning wildly at turn 12, an incident that would also collect the second Action Express Corvette, driven at the time by Eric Curran.

Goossens was able to climb out of his wrecked machine without suffering injuries, while Curran limped his battered vehicle to the pit lane where it would take several minutes before co-driver Dane Cameron could return to action. The wrong place at the wrong time moment was a bitter pill to swallow for Cameron and Curran, who entered Saturday’s race as the championship leaders and the defending champions of the Chevrolet Sports Car Classic.

With the early mishap and other issues plaguing the remainder of the prototype field, SpeedSource Mazda Motorsports claimed their first prototype class podium finish since winning the SRP division at the 2001 Rolex 24 at Daytona. Tristan Nunez and Jonathan Bomarito claimed the honor for the new I4-engined Lola coupe, albeit well down the order in the overall finish.

As a result, the battle for the Prototype Challenge class win Saturday at Belle Isle, also evolved into a fight for the final place on the overall podium. Following the one and only round of pit stops for the PC class, CORE autosport’s Colin Braun had assumed the lead with 35 minutes to run, but would be forced into a late scrap with Starworks Motorsport’s Renger Van der Zande before the conclusion. Despite the popular Belgian making several charges at the American, Braun managed to hang onto the top spot. That is, until an unforced error would prove costly in the final ten minutes.

Attempting to clear slower GT Daytona-classed traffic, Braun went off of the preferred line at turn ten and spun the No. 54 ORECA FLM09 through one complete revolution whilst amazingly being able to keep the car from striking the outer barriers. Braun, who took over from team owner Jon Bennett at the pit stop would recover to finish second in class and fourth overall, however the incident turned the victory over to Van der Zande and his Starworks teammate Alex Popow, for their first win of the 2016 season.

The win in PC was a perfect way to christen a new paint scheme kit for the No. 8 team, as well provide a little bit of satisfaction for Van der Zande, who just missed out on claiming the overall win last weekend at the Nurburgring 24 Hours race on the infamous Nordschliefe circuit in Germany.

Behind the top two in Prototype Challenge, PR1-Mathiasen Motorsports’ Tom Kimber-Smith and Robert Alon, who started from the class pole position on Saturday, held on finish third in class and fifth overall, with Performance Tech Motorsports and BAR1 Motorsports rounding out the PC first five.

Finally in GT Daytona, Ben Keating and Jeroen Bleekemolen’s overnight flight from Detroit to France on Saturday night should be a positive one, as a stellar pit stop from the Gas Monkey Garage/Riley Motorsports’ crew moved the No. 33 Dodge Viper GT3-R from fourth in class to first, a position Bleekemolen would hold to the flag, despite persistent pressure from Park Place Motorsports’ Porsche driver Jorg Bergmeister, who alongside teammate Patrick Lindsey would finish second.

Keating’s Viper Exchange operation is one of several teams who are split between the North American and European continents this weekend, as the focus is halved between IMSA race action and early preparation for the 84th running of the 24 Hours of Le Mans, to be held on June 18-19. The official test day at the 8.45 mile Circuit de la Sarthe will take place on Sunday.

However, unlike several teams who are running similar equipment at Le Mans to what they normally utilize in IMSA, Keating and Bleekemolen will trade in their Viper for a ORECA 03R open top prototype to contest the LMP2 division at Le Mans, after their Dodge Viper was not given an invitation to compete by the FIA-ACO.

Another overnight flight planned team from GTD is Scuderia Corsa, claiming third in class Saturday with its Ferrari 488 driven by Alessandro Balzan and Christina Nielsen, whose efforts extended their points lead on the championship table in the lower grand touring division. The podium is the third straight in races at Detroit for Balzan, who won in the Motor City for Corsa two years ago.

Scuderia Corsa will run a Ferrari 458 Italia in the GTE-Amateur at Le Mans, but with Bill Sweedler, Townsend Bell, and Jeff Segal at its driving trio. Sweedler and Bell skipped Saturday’s race in Detroit to get an early start on preparation for the 24 Hours of racing to come in two weeks time.

Stay tuned to OnPitRoad.com for continued coverage of the IMSA WeatherTech SportsCar Championship.