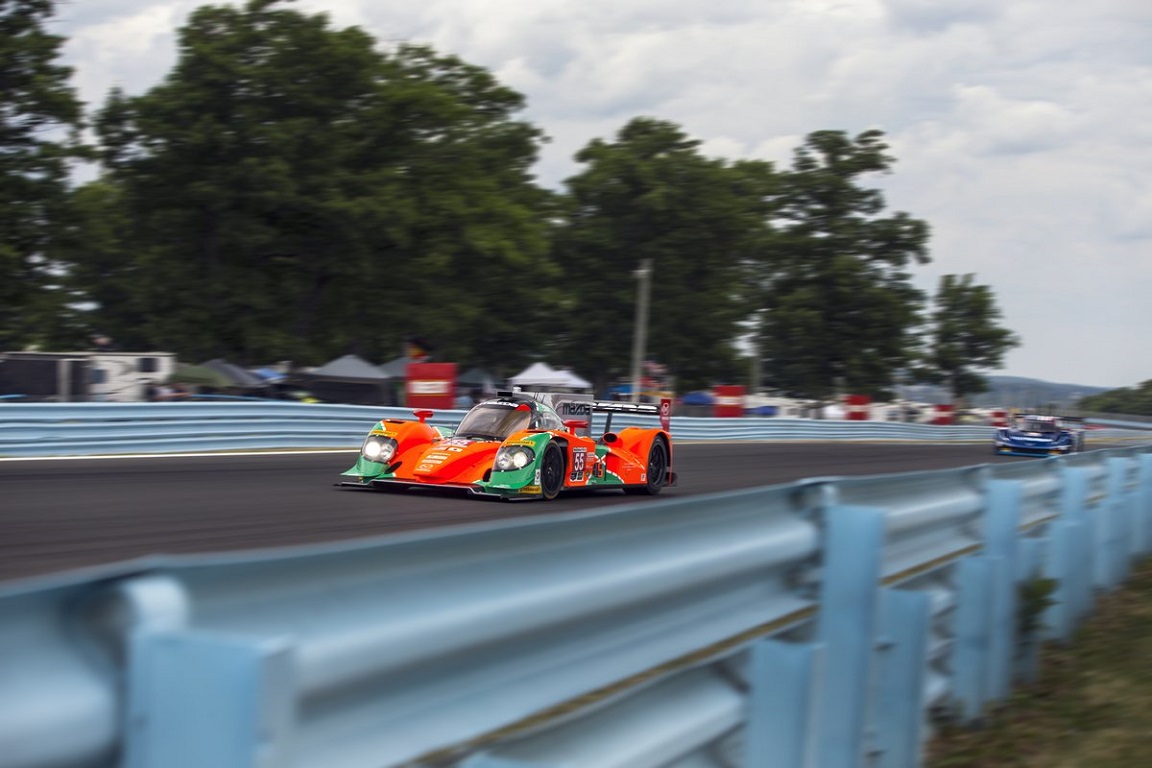 Give credit to SpeedSource Mazda Motorsports, even though they have yet to score a victory in the headliner Prototype division of the IMSA WeatherTech SportsCar Championship, at least in 2016 they have given themselves chances to get one as opposed to the past two campaigns.

On Sunday at Canadian Tire Motorsports Park in Ontario, Canada, the former diesel-engined runners who have suddenly found increased pace with a new I4, gasoline propelled power plant will start from pole for the Mobil 1 Sports Car Grand Prix. Tristan Nunez’s one minute, 10.126 second pass of the very fast, 2.459 mile layout was enough on Saturday to secure the TOTAL Pole Award, the second gained in 2016 by Mazda, alongside its clean sweep of the front row in May fittingly enough at Mazda Raceway Laguna Seca in California.

Now comes the hard part of the equation, one where SpeedSource has not quite been good enough at just yet. That is of course finding a way to getting their car to the finish line first after the two hour, forty minute time limit expires on Sunday. Although they are no longer struggling to consistently finish races, as was the case with diesel power, Mazda has only one podium finish in the first six races of the 2016 IMSA season. SpeedSource looked set to claim its second podium of the year last weekend at Watkins Glen International in upstate New York, only to fall out of the event in the final hour due to a blown engine. Still the chances of victory appear solid as Nunez and his co-driver Jonathan Bomarito start from pole in the No. 55 Lola-Mazda coupe, while teammates Joel Miller and Tom Long will start third in the No. 70 car.

If Mazda however, is unable once again to grab the top step of the podium on Sunday, there are four Chevrolet Corvette DPs who would be able to roll forward and win the race for themselves. Wayne Taylor Racing’s brother act of Ricky and Jordan Taylor will start outside the front row on Sunday, while Six Hours of the Glen overall winners Joao Barbosa and Christian Fittipaldi from Action Express Racing will start from position number four. Entering Sunday’s action in Canada, Action Express currently holds a seven point lead on the current championship points table over WTR.

In the Protoytpe Challenge category, CORE autosport’s Colin Braun secured the TOTAL Pole Award on Saturday with a solid one minute, 11.946 second effort, the first such honor in 2016 for perhaps the division’s top pilot. Of course, the effort was the first time since Daytona that Braun has handled the qualifying duties, a role normally held by teammate and car owner Jonathan Bennett. Although the No. 54 machine, which has dominated PC action for several seasons dating back to the former American Le Mans Series, will start from the top spot, the question now is can Bennett keep it there. IMSA rules dictate that the driver that qualifies a car, must also start the car in the race itself. This means that unless CORE is planning to make two driver changes during the two hour, forty minute distance, Bennett the slower of the team’s two drivers would likely be called upon to finish the event.

With that dilemma present, others in the PC field may still have a shot to win on Sunday. Leading the chase group is Performance Tech Motorsports’ James French and Kyle Marcelli, who will start second in the class. The Brent O’Neill-run team just missed out on victory last weekend in Watkins Glen, when it settled for second. Another potential threat is JDC-Miller Motorsports’ Stephen Simpson and Misha Goikhberg who has won at both Daytona and Long Beach so far in 2016. Despite not placing better than fourth in any of the other events run so far this year, the squad will start third on Sunday. By contrast, Starworks Motorsport who enter Canada on a two-race winning streak qualified sixth and seventh on Saturday, but with their slower drivers handling qualifying, the team would be able to call upon their star drivers Renger van der Zande and Richard Bradley for the run to the finish, which could provide an advantage.

In GT Le Mans, it was a good news, bad news scenario for Corvette Racing on Saturday at Canadian Tire Motorsport Park. While they were able to earn their first TOTAL Pole Award of the season, it did not come from its entry that currently leads the points standings. Instead, the honor was earned by Antonio Garcia with a solid one minute, 15.198 second hot lap. While Garcia and teammate Jan Magnussen will start from position number one, their sister entry of Oliver Gavin and Tommy Milner will be hard pressed to maintain their championship lead after Sunday’s event.

Although Gavin was only four tenths of a second off the pole time, the effort was only good enough for sixth place on the starting grid, notably behind the team closest to them on the points table. The biggest threat to taking over the championship lead is Chip Ganassi Racing’s Ford GT project, which thanks to the efforts of Richard Westbrook and Ryan Briscoe enter Sunday’s race on a two event winning streak. The No. 67 entry will start right behind its sister No. 66 Ford of Dirk Mueller and Joey Hand who will start second.

Also getting the best of Gavin’s Corvette on Saturday was Bobby Rahal’s pair of BMW M6 GTLMs, who will start fourth and fifth on Sunday. Risi Competizione’s Ferrari 488 GTE and Porsche North America’s pair of 911 RSRs complete the grid in GTLM.

Finally in GT Daytona, Porsche managed to flip the result in GTLM towards its own favor in the lower grand touring category as Alex Job/Team Seattle’s Alex Riberas earned the TOTAL Pole Award Saturday at one minute, 18.245 seconds. Riberas, along with teammate Mario Farnbacher took the checkered flag first earlier this season at Mazda Raceway Laguna Seca.

The front of the GTD grid for Sunday does feature some parity in terms of competing manufacturers. Stevenson Motorsports’ Audi R8 will start second, Change Racing’s Lamborghini Huracan will lineup third, and Turner Motorsport’s BMW M6 will start in position four. Things though will be testing for the championship leading Ferrari 488 from Scuderia Corsa. Christina Nielsen struggled in Saturday qualifying and co-driver Alessandro Balzan and herself will begin Sunday’s action from tenth place.

1 thought on “IMSA: Nunez Puts Mazda On Pole In Canada”