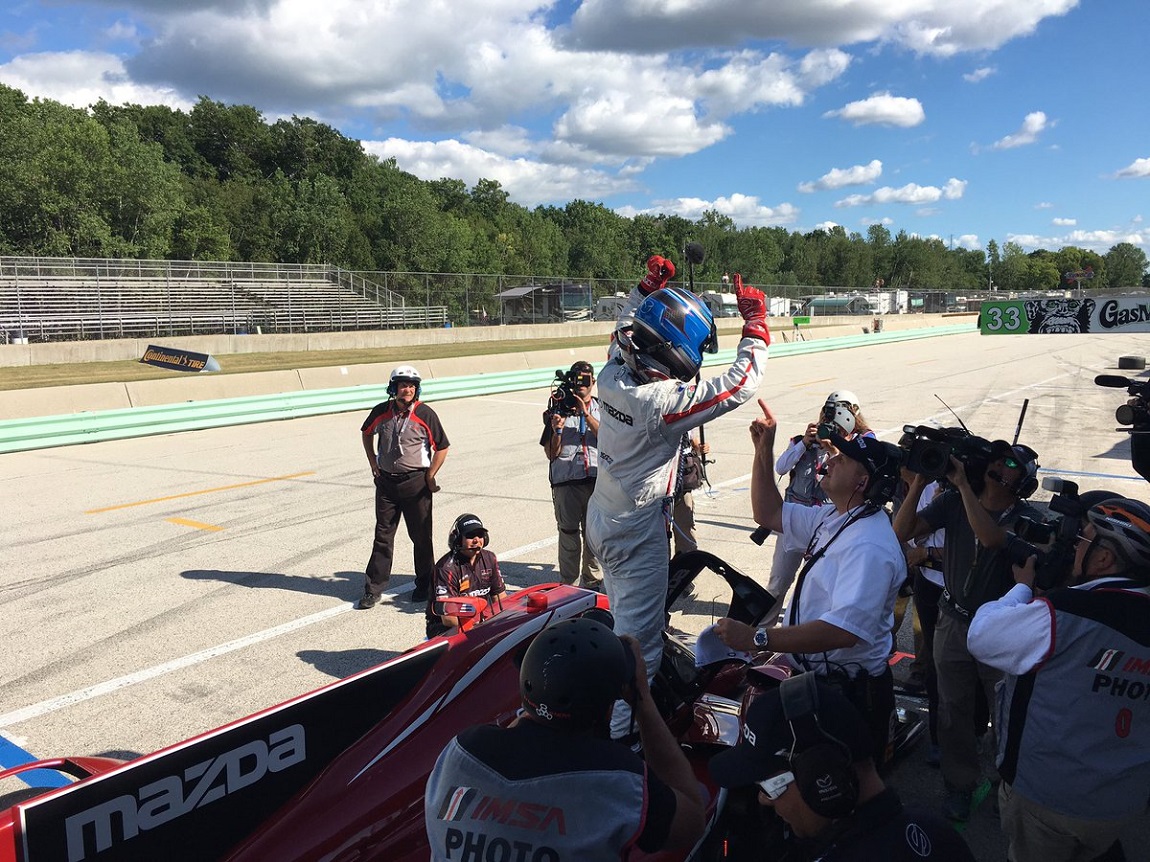 Over the course of a single lap during the 2016 IMSA WeatherTech SportsCar Championship season, SpeedSource/Mazda Motorsports since switching to its new I4-based power plant has proved to be the fastest among its rivals in the Prototype division and again on Saturday, Jonathan Bomarito exposed the Japanese manufacturer’s supposed edge by taking the pole position for Sunday’s Continental Tire Road Race Showcase at Road America in Elkhart Lake, Wisconsin.

The four-mile layout of Road America, with multiple long straightaways has suited the LMP2-eligible cars in IMSA’s headliner class well so far this weekend as Bomarito, who shares the No. 55 Lola-Mazda coupe entry with teammate Tristan Nunez toured the track in one minute, 54.507 seconds to earn the top place on the starting grid by more than a full second on the remainder of the field. The TOTAL Pole Award is the third this season for Mazda, which prior to 2016 had struggled to avoid qualifying at the back of the grid in its past two seasons utilizing the SkyActiv-D diesel based engine. The question now shifts to race trim, where SpeedSource has so far been much less successful.

Entering Sunday’s two hour, forty-five minute timed event, the two-car operation run by Sylvain Tremblay has only posted one top three finish in 2016 as its early pace shown in qualifying has disappeared during the actual race. If that trend continues on Sunday, current IMSA championship leaders Action Express Racing would be the first in line to claim the top step of the podium.

The No. 5 Mustang Sampling-backed Chevrolet Corvette DP, driven by Christian Fittipaldi and Joao Barbosa which will start second on race day, has finished second or better in its last three appearances and currently holds a four-point lead on its sister entry of Dane Cameron and Eric Curran which won the most recent IMSA race at Canadian Tire Motorsport Park in Ontario. Cameron and Curran will start fifth on Sunday.

In Prototype Challenge, Performance Tech Motorsports’ James French held off a very competitive group on Saturday to secure the TOTAL Pole Award with a one minute, 59.133 second effort in qualifying. French and co-driver Kyle Marcelli like Mazda will also be seeking their first victory of the season, entering Sunday’s race with momentum after taking podium finishes in two of the past three events. Jose Gutierrez will start alongside French on the front row in PC, as he and teammate Gustavo Yacaman lead a trio of entries from Peter Baron’s Starworks Motorsports squad, with the ORECA FLM09 of Renger van der Zande and Alex Popow taking the checkered flag first in three of the past four events.

Van der Zande and Popow, who will start sixth on Sunday, currently hold a 17-point lead on the PR1-Mathiasen Motorsports ride of Tom Kimber-Smith and Robert Alon who will lineup in the number five starting spot on Sunday.

In GT Le Mans, Chip Ganassi Racing’s Ford GT squad will look to close back in on Corvette Racing on the points table Sunday, after giving up ground in the most recent IMSA WeatherTech Championship race at Lime Rock Park in Connecticut. CGR got off to a strong start in qualifying at Road America on Saturday, by placing its two entries in the top three starting positions. Dirk Mueller secured the pole position at two minutes, 2.451 seconds, while teammate Ryan Briscoe was one half of a second behind in third.

Between them, Nick Tandy placed the Porsche North America No. 911 RSR in second on the grid, by far the best performance by the CORE autosport-run squad since the opening rounds of the 2016 season After dominating the second half of the 2015 campaign to win the GTLM title a season ago, Porsche only has managed a win at Long Beach and one other podium finish to date in IMSA action this year. As for the 2016 championship leaders from Corvette Racing, the No. 4 entry of Oliver Gavin and Tommy Milner will be hard pressed to limit the damage suffered to its point lead on Sunday after the team only qualified seventh on Saturday. Gavin and Milner enter the race action leading Briscoe and teammate Richard Westbrook by only ten points.

Finally in GT Daytona, Team Seattle Porsche has begun its comeback from a failed to finish effort at Lime Rock by grabbing the TOTAL Pole Award on Saturday in Wisconsin. Alex Riberas secured the honor with a two minutes, 7.520 second pass, with only the pair of Audi R8s from Stevenson Motorsports representing the only other GTD rides in the 2:07 bracket. Andrew Davis edged teammate Matt Bell by twenty-six one thousandths of a second to claim the number two on the starting grid, with the Riley Motorsports Dodge Viper of Ben Keating filling out the second row.