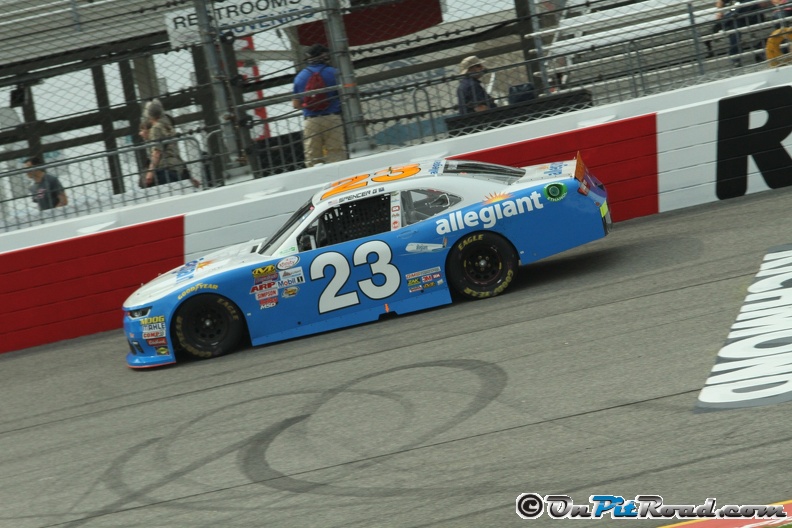 Spencer Gallagher’s rookie campaign in the NASCAR XFINITY Series started off rough with three finishes outside the top-20 in the first three races, but the Las Vegas native is coming into his own.

Gallagher scored his first top-10 finish of the season on Saturday at Richmond International Raceway after taking advantage of a few crazy late-race restarts.

The day didn’t start off on a good note for the driver of the No. 23 Allegiant Travel Chevrolet. He qualified 33rd, and was mired back a lap down for most of the race.

Joey Cohen, Gallagher’s crew chief, made the call on the next to last restart of the race to pit for four fresh tires. The No. 23 team was one of few who had an extra set of sticker tires in the pits, and the team took advantage of them to go from 17th to 10th on the final restart.

“What an incredible ending for our Allegiant team today,” Gallagher said. “To say we didn’t struggle would be unfair with the amount of work these guys put in over the course of those 250 laps. We didn’t start off as strong as we would have liked and those long green flag runs certainly didn’t help, but we anticipated there would be several cautions at the end and luckily we had a set of tires left to help us gain some additional spots and make it past those wrecks. Joey (Cohen, crew chief) and the team did a phenomenal job. I couldn’t be more proud of what this team has accomplished so far this year.”

With the top-10 finish, Gallagher now finds himself 14th in points. He’s only 24 points behind Cole Custer who holds the final playoff position as the XFINITY Series heads to Talladega Superspeedway next weekend.