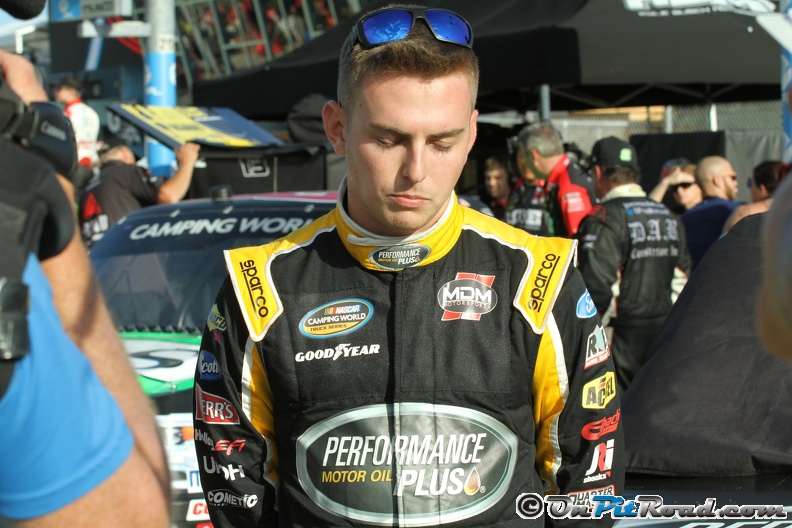 STATESVILLE, N.C. (January 12, 2018)- With the start of the 2018 NASCAR Camping World Truck Series (NCWTS) season being only 35 days away, GMS Racing officials are proud to announce the addition of Dalton Sargeant to their driver lineup. Competing for Rookie of the Year honors this season, Sargeant will be the driver of the No. 25 GMS Racing Chevrolet Silverado.

Sargeant will move to the NCWTS full time after successful seasons competing in the ARCA Racing Series and NASCAR K&N Pro Series. The 19-year-old most recently recorded four wins, one pole award, 20 top-five finishes, 2016 ARCA Rookie of the Year honors, and a second-place finish in the 2017 ARCA Series championship standings. Sargeant also has 18 K&N Pro Series starts across both the West and East Series with one win, two pole awards, 10 top-five finishes and was selected to the 2015 NASCAR Next Class. Heading into the 2018 season, Sargeant has six previous NCWTS starts under his belt with two top-10 finishes, including a 10th-place finish in his debut at Bristol Motor Speedway.

“I’m really excited to be joining a championship-caliber team in GMS Racing for the 2018 NASCAR Camping World Truck Series season,” said Sargeant. “Mike Beam and everyone at GMS Racing has put so much effort into this No. 25 team during the off-season and I can’t thank them enough for this opportunity. GMS Racing has put together an all-star team of people and equipment, plus had faith in me to drive and compete for wins. I’m looking forward to what we can accomplish in 2018. It’s always been a dream and a goal to compete at this level in NASCAR. I left a career and a life in Europe to compete against the best in NASCAR and today is that day. We have a full slate of things coming up as a team and I know we’re all really looking forward to getting on the track and beginning the season.”

Although Sargeant will be competing as a Sunoco Rookie of the Year candidate in 2018, the No. 25 Chevrolet Silverado will be led by a veteran crew chief. Doug Randolph joined GMS Racing in the off-season, bringing 17 years of experience as a crew chief across all three of NASCAR’s top three series. Randolph has worked with both Dave and Ryan Blaney, Sterling Marlin, Bobby Labonte, Brad Keselowski, Clint Bowyer, Scott Riggs and Jimmy Spencer. Randolph has 11 wins, 75 top-five and 149 top-10 finishes, including eleven pole awards as a crew chief in NASCAR competition.

“I can’t thank Mike Beam and GMS Racing enough for the opportunity to lead this race team in 2018,” said Doug Randolph. “I met Mike on my first job in racing as a mechanic for Junior Johnson’s team in 1982. We’ve worked together many times throughout our careers and have stayed friends along the way. He and Maury Gallagher have certainly given us all the resources we need to win races and championships. I’ve watched Dalton progress in his career for a while now. He’s been impressive and won in everything he’s driven, against tough competition for years. I’ve taken a lot of pride into developing drivers over the years, and the opportunity to work with Dalton at a race team like GMS Racing is something that I’m excited to be a part of.”

Additional information for Dalton Sargeant and the No. 25 GMS Racing team will be announced at a later date.