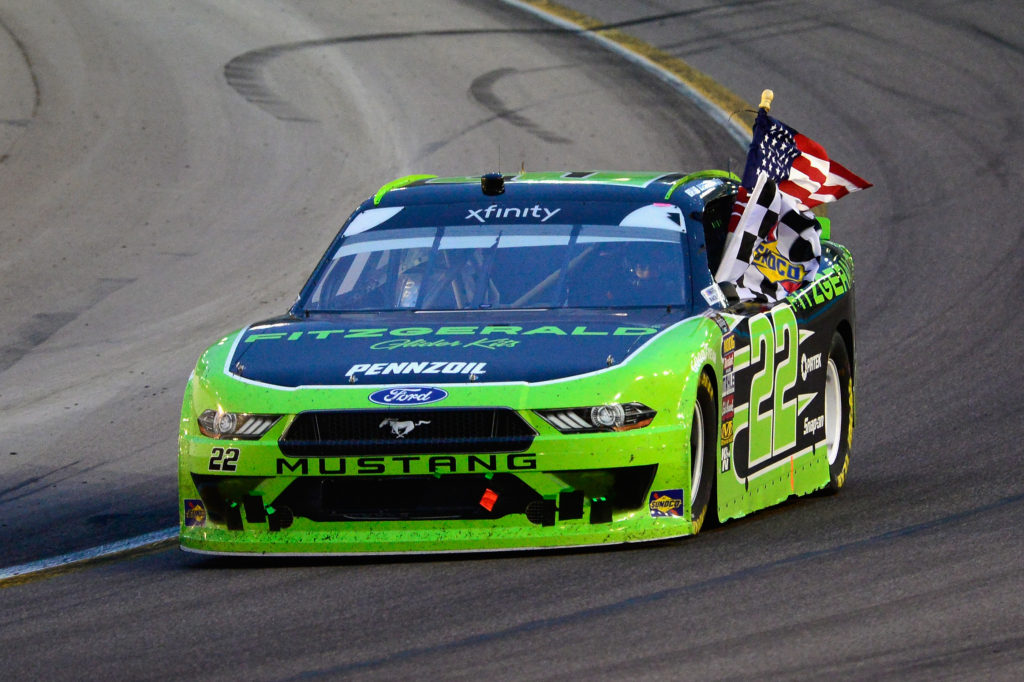 It isn’t often a NASCAR XFINITY Series race takes more than four hours to complete, but that was the case today when a race in the desert of Arizona was stopped on two occasions for rain. At the end of the day, Brad Keselowski came out on top, earning the 37th win of his XFINITY Series career.

“It was a good car. I thought the car was better than me today,” Keselowski said in victory lane. “Justin Allgaier quite honestly outdrove me most of the day.

When the DC Solar 200 at ISM Raceway began, it was just after 2:00 p.m. local time. Despite only having a 16 per cent chance of rain during the day, a small shower was spitting down on the track. The drivers were able to race throughout it, however. It was good news for polesitter Justin Allgaier too, as he was able to hold on to win the race’s first stage.

At the conclusion of the first stage, though, it was a different story. NASCAR brought the cars down pit road and halted the race, citing the rain getting too heavy to continue. Following a one-hour and 35 minute rain delay, the race resumed for Stage 2.

Allgaier’s teammate, Daytona winner Tyler Reddick, led the way to start the second stage as he, Ryan Reed, Elliott Sadler and Alex Labbe elected to stay out on the stage break. Reddick’s lead was short lived as Kyle Busch made his way around was the tires were heated up.

With just seven laps before the stage ended, Matt Mills got up into the wall causing a caution that wound up drastically changing the race. With more weather on the way, teams had to make a decision to pit or stay out. Allgaier, Christopher Bell and Keselowski opted to pit while Busch, among others stayed out.

As the field was getting set to restart, the rain picked up yet again forcing NASCAR to bring the cars down pit road for a second red flag just two laps before the end of the second stage, which would’ve made the race official.

After another half hour delay, the race got back underway for a one-lap dash to the end of the stage. Busch would be the victor.

When the final stage began, Allgaier got back to the position he started the day – in first. He would hold onto it for 50 laps before surrendering the lead to Keselowski, whose car was getting increasingly stronger.

On Lap 164, just prior to scheduled green flag pit stops, Christopher Bell took the lead from Keselowski after reeling in the two frontrunners in he and Allgaier. On the pit cycle, Bell and Keselowski pitted together. A marginally quicker pit stop by the No. 22 crew allowed Keselowski to exit the pits just in front of Bell. Keselowski would go on to win the race in his first XFINITY start of the year.

“At the end we connected it with a great pit stop, great pit work, great strategy and got out there on the brand new tires and just barely got by (Bell) there and I knew once we kind of got by ourselves, the car would probably carry me a little bit,” Keselowski said.

Finishing just behind the No. 22 was Allgaier followed by Busch, Bell and Jamie McMurray; McMurray was making his first XFINITY start since 2013. Rounding out the top-10 drivers were Daniel Hemric, Matt Tifft, Cole Custer, Sadler and Reddick.