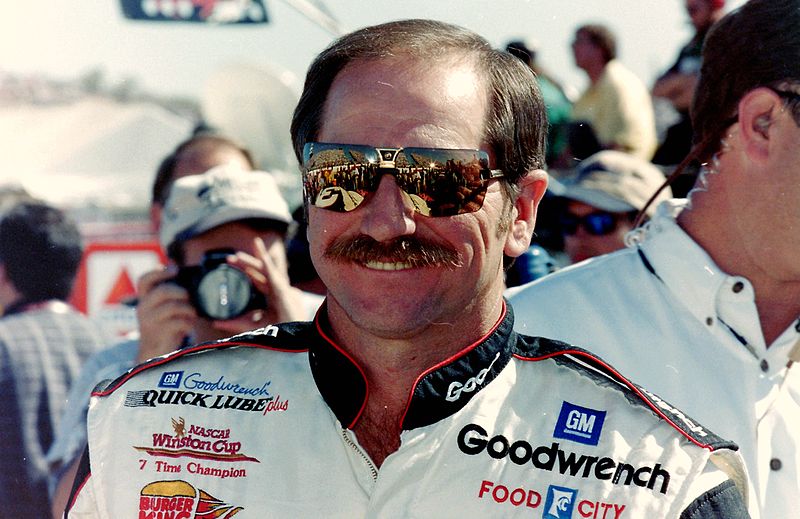 The butterfly effect; it’s the theory that a small change in one state of a non-linear system, much like a parallel universe, can result in larger differences at a different time. It’s also a mediocre at best movie starring Ashton Kutcher from the early 2000s.

What does that have to do with NASCAR, you ask? Well, this is the first in a series of “what if” butterfly effect-type scenarios in NASCAR.

Today, we look at what might have happened if Dale Earnhardt replaced the departing Darrell Waltrip at Junior Johnson’s race team in 1987.

I will preface this story by saying something that I found during my research.

I had heard over the years, and was under the impression, that a run-in between Waltrip and Earnhardt at the Richmond Fairgrounds in 1986 was the reason that Johnson changed his mind about wanting Earnhardt in the car. That is not the case.

Johnson himself in an online interview admitted that it wasn’t because of the wreck with Waltrip, but something that I actually find even more shocking. Budweiser apparently did not want Dale Earnhardt to be their driver.

At the time, Earnhardt wasn’t a seven-time Winston Cup Champion, but he wrapped up his second title in 1986 so he wasn’t exactly an unproven commodity. Budweiser wanted Johnson to hire Terry Labonte, who they had a past relationship with, so Johnson agreed to their wishes. He even admits that if he could have a “do over” he would have kept a second NASCAR team and found a sponsor for Earnhardt and ran them both.

But, the premise of this butterfly effect is what exactly “might” have happened if Dale Earnhardt did indeed wind up with Junior Johnson. Knowing that Johnson almost tried to run two teams, with Earnhardt as a teammate to Terry Labonte in the Budweiser car, we will start from there and try to make sense of what could have happened in 1987.

It may be a good idea to look at how the major players in this game of “what if” were positioned at the end of 1986 first.

Darrell Waltrip was already headed to Rick Hendrick as part of what many called a “dream team.” He would have Waddell Wilson as his crew chief and Tide as his sponsor. That would be the catalyst in all of this. Then, assume Johnson did go through with running two cars and has Labonte and Earnhardt in 1987. I won’t saddle Earnhardt with a sponsor and complicate things further so we’ll just assume it’s someone that won’t have an adverse effect on any of the other cars/teams.

The next biggest piece of the puzzle would obviously be who would Childress tap to replace Dale Earnhardt in the No. 3 Wrangler car for 1987? One of the favorites in the clubhouse would have to have been Ricky Rudd, who drove for Childress in 1982-1983, and gave Childress his first NASCAR win as an owner in June 1983 at Riverside. Rudd also had a relationship with Wrangler Jeans so he would have been a good fit.

Childress would also probably have looked strongly at making a play for Tim Richmond, who rivaled Earnhardt on the track, but Richmond’s deteriorating health would have likely kept that from happening as well. Let’s assume he passes over Rudd and is afraid to make a play for Richmond due to his health issues.

Realistically, what direction would he have went? On one hand he could have tried to get a veteran in the seat. Cale Yarborough, Buddy Baker and Benny Parsons were all running partial schedules in 1986. Neil Bonnett would likely have gotten a strong look as well.  At the time, Bonnett was only 40 years old and had 16 wins in his career up to that point.

Conversely, he could have looked at a younger driver. Phil Parsons and Ken Schrader both stand out as young drivers that Childress might have given a look, but if you are replacing a departing Winston Cup champion, I’m not sure, at that time, if either would have got the nod. That leads me to a young guy who had begin to prove himself in Winston Cup racing – Rusty Wallace.

Wallace replaced the departing Tim Richmond driving for Raymond Beadle to start the 1986 season. In ’86, Wallace had 16 top-10s in 29 races, along with two victories. He had a hard nosed edge about him and didn’t care to mix it up with anyone on the track. I’m going to say that if Earnhardt departed after 1986 that Richard Childress would have tapped Rusty Wallace to drive the No. 3 Wrangler car.

Now, if Wallace replaces Earnhardt that leaves the No. 27 Beadle ride with new sponsor Kodiak vacant. Beadle tended to lean towards younger drivers so that would rule out what would otherwise have been my first pick in Neil Bonnett. Since Beadle liked to bring in younger drivers, I think there would be two drivers he would have gave serious consideration to: Ken Schrader and Davey Allison. But in this situation I’m going to give Allison the nod, simply because he had the racing pedigree.

I would put Beadle’s car and the Harry Ranier ride about neck and neck as far as quality of ride at that time. The reason I’d say Allison would choose Beadle over Ranier is that the Ranier car was only a part-time entry in 1987. With Beadle’s No. 27 Kodiak car being a full-time car, I have Allison landing there.

Who then runs the part-time entry for Harry Ranier? I’ll assume here that Yarborough still departs after the 1986 season to run his own team. I think the pool for Ranier would have consisted of Ron Bouchard, Lake Speed, Mark Martin and Greg Sacks. On paper, at that time, I would have probably given the call to Mark Martin. He won his fourth ASA Championship in 1986 and had enough previous NASCAR experience to garner a shot with better equipment. With Martin actually running for the Busch Series title in the “real” 1987, that concludes our ride jumping.

So, in fantasy world 1987 here would have been the players:

Can you imagine just how different NASCAR would be today if Earnhardt had hooked up with Junior Johnson? Would that combination go on to the same success that Earnhardt had with Childress?

In this scenario, Davey Allison goes full time in 1987 driving for Raymond Beadle instead of part-time driving for Harry Ranier. Mark Martin gets to Cup one year earlier driving for Ranier so where does that leave Jack Roush in 1988? With Allison driving for Beadle, what kind of success would they have had? There’s definitely a lot of what ifs that could be pulled in this scenario.

I hope you have enjoyed this first ever butterfly effect NASCAR column. Tell us what butterfly effect you’d like to see us cover in the comments. It’s staggering to think of how one move could have changed the entire landscape of the sport for decades. Junior Johnson with Dale Earnhardt and Richard Childress with Rusty Wallace, now that would have been interesting!

2 thoughts on “Butterfly Effect: Dale Earnhardt to Junior Johnson in ’87”