Shane van Gisbergen has won the battle of the Kiwis in the fight of the century in Sydney.

The first Supercars race under lights in Sydney in 22 years did not disappoint with Van Gisbergen pouncing on a late safety car and then his arch rival Scott McLaughlin to make history.

He claimed the first night time victory in Australian since 1997 at the Red Rooster Sydney SuperNight 300 in what became one of the all-time great finishes.

It means Van Gisbergen has ripped 52 points from McLaughlin’s Championship lead. He is now just 89 points adrift in what was a big statement from the 2016 Supercars Champion.

The safety car was the difference, killing the lead McLaughlin had built across the race.

“It took a long time for the race to come alive and then the safety car came out,” Van Gisbergen explained.

“After that Scotty drove really well and defended incredibly well. I gave him a few bumps but he wasn’t fazed. I was enjoying the battle until I got through,” Van Gisbergen said. 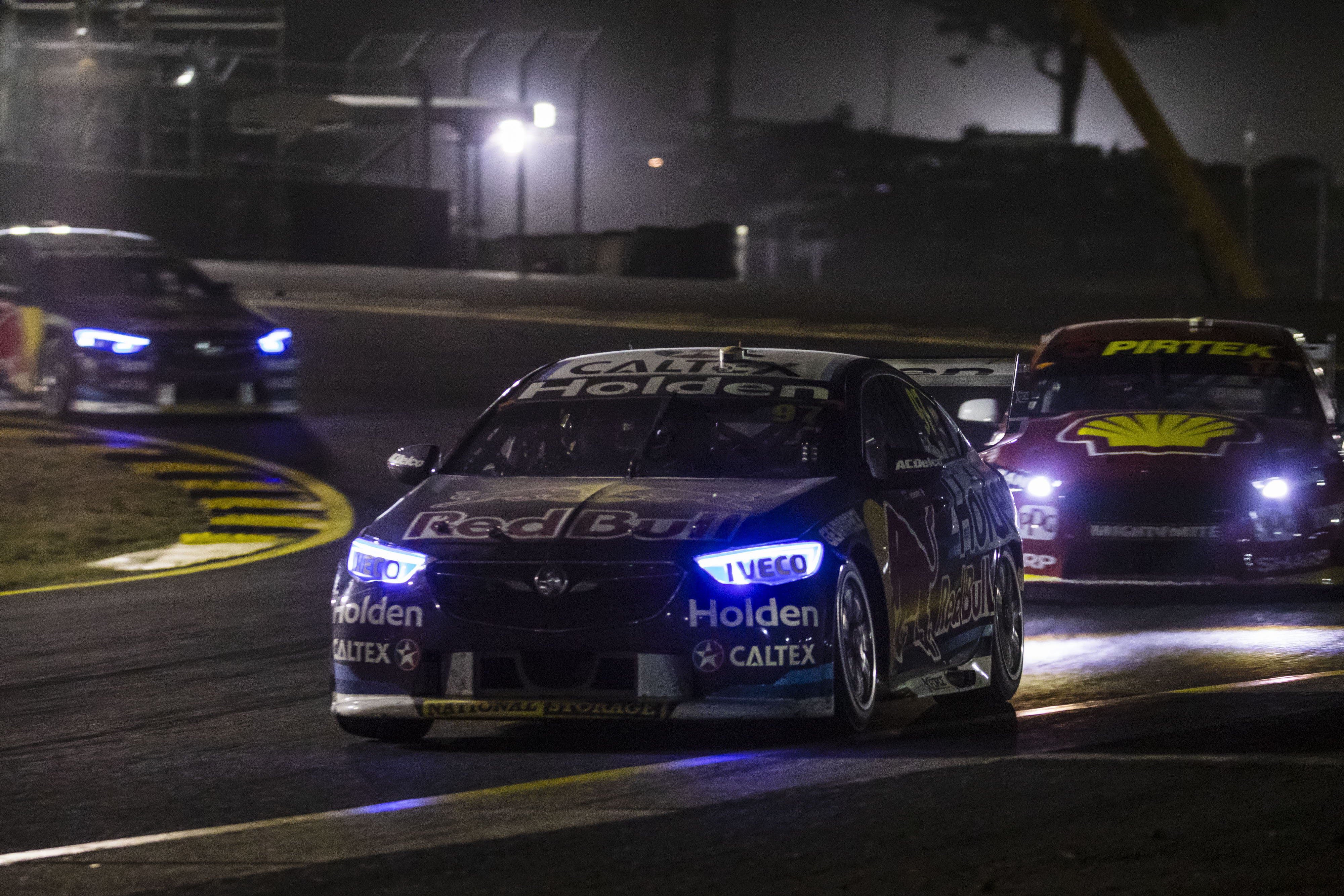 “A 1-2 for the team was a really good result. Thanks to everyone who came out, it was awesome.”

McLaughlin was left devastated that luck deserted him at the wrong time. Craig Lowndes, who won the last Sydney night race in 1996, suffered the same fate just when it looked he and McLaughlin would fight to the finish.

“I tried so hard to keep them behind” McLaughlin said. “Great strategy call by them. Sorry to the Ford fans I couldn’t get it done. We had a great car, great team, great pit stops, great strategy but the safety car just came out at the wrong time.

“Still, it was a good points day and I really enjoyed it under lights.”

At one stage prior to the safety car it had been the battle of the kid and the Champ. McLaughlin and Lowndes looked set to fight for the flag before the perfect safety car gave Van Gisbergen and Whincup fresh rubber and closed the lead McLaughlin had spent an entire race building.

“That safety car didn’t come to us at the right time,” Lowndes said. “We had a good gap and we were trying to manage that but that safety car bunched everyone up.”

The event was an overwhelming hit with 33,920 people attending over the Friday and Saturday.

The spectacular pre-race in front of sold-out grandstands and corporate facilities was a huge hit with the crowd who were adorned in all manner of lights, including hundreds of LED sunglasses.

The opening laps were ferocious. Van Gisbergen was aggressive from the onset in the chase of the two front row sitters. He diced with Fabian Coulthard for much of the opening lap, taking second.

Whincup joined the fight a lap later got around Coulthard as the field settled.

Mixed pit strategies mixed the field up with Lowndes at one stage moving into third on the undercut but gave the places back on his second stop.

All the while McLaughlin was in control at the front. The super powers of Shell V-Power Racing and Red Bull Holden Racing Team traded strategies but the smokey in the pack was Lowndes.

Based on strategy Lowndes led the race for the first time after 40 laps and two stops.

The ageless veteran maintained a four second lead lap after lap on McLaughlin in a performance just as good as his 106 race wins. The last stop would ultimately decide whether the old or the new would prevail. That was until the safety car had the ultimate say.

The pair came into at the same time on lap 53. Needing more fuel, Lowndes gave back the lead to McLaughlin but still had time to make the gap with 22 laps to go.

While that was happening there were battles right around the circuit, none better than a skirmish between Supercheap Auto Racing’s Chaz Mostert and Boost Mobile Racing’s Scott Pye.

The pair were entrenched in the top six and racing bumper to bumper lap after lap.

Mostert took fifth in his Supercheap Auto Falcon as the best of the cars beyond Triple Eight and DJR Team Penske.

The Tickford Racing driver could not quite go with the lead quartet on pace but kept his nose clean throughout the 300km of racing.

Drivers will now prepare for the first ever OTR SuperSprint at The Bend in South Australia, which will run from 24-26 August.