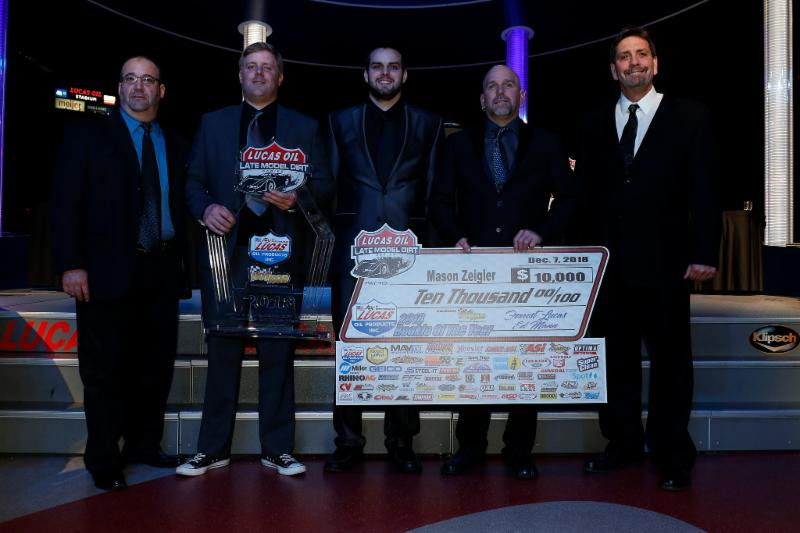 Davenport was humbled in front of a large group of his fellow drivers and supporters, thanking his crew, family, sponsors, car owners, friends, and more for believing in him and helping make this possible. “I’ve got to start by thanking my boy Blane because he cuts me no slack. If I run bad, he wants to know why,” Davenport chuckled.

“Thank you to Lance Landers for believing in me and giving me this opportunity,” said Davenport. “Thanks to my partner, Nutrien Ag Solutions and Steve Martin; he’s more than just a sponsor, he’s a great friend. Thanks to the hardest working crew chief in the industry, Jason Durham. Since the day we put this team together, it’s always been about this Championship.”

Davenport and the Lance Landers Motorsports team ended their season with the Lucas Oil Late Model Dirt Series with 9 wins, 28 top-fives, 38 top-ten performances and collecting a total of $403,948.79 in earnings.

Mason Zeigler received the 2018 Lucas Oil Rookie of the Year presented by Hot Rod Processing award. The twenty-six-year-old finished twelfth in the overall Championship Standings during his first-ever year on a national tour.

“I can’t say thank you enough to my dad and my entire family for supporting me and my dreams,” exclaimed Zeigler. “I also could not do this without my crew, they sacrifice so much time away from their families to be on the road.”

Zeigler added: “It’s been a long grueling season; I have so much more respect for everyone in this room than I did when I started. Thank you to everyone for a great season, we’re looking forward to next year.”