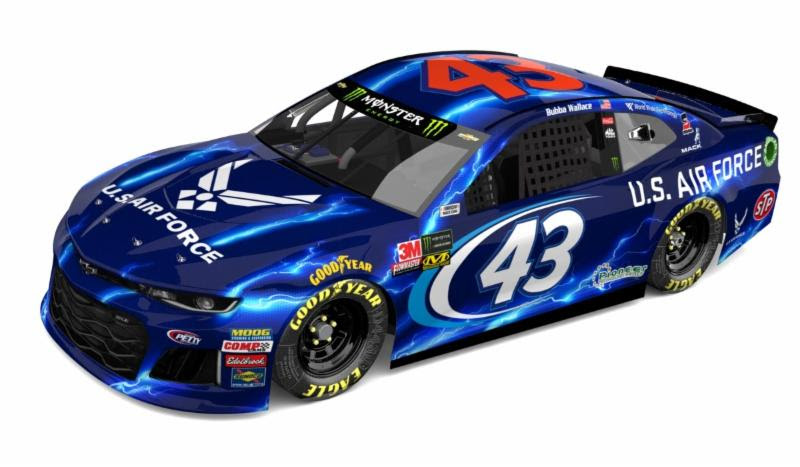 JOINT BASE SAN ANTONIO–RANDOLPH, Texas (December 14, 2018) – The Air Force and Richard Petty Motorsports announced today they will continue their 11th consecutive year of partnership together in the Monster Energy NASCAR Cup Series in 2019. The Air Force will continue to be a two-race primary sponsor of the famed No. 43 with driver Bubba Wallace, as well as a major associate throughout the season.

Air Force Recruiting Service, charged with the mission to inspire, engage and recruit future Airmen, sees the continued association as an opportunity to build awareness about the Air Force. The Air Force has also witnessed the excitement that Wallace Jr. has brought to inspiring recruits in 2018 during his first year representing the Air Force.

As a partner of the No. 43 Chevrolet Camaro ZL1 team, the Air Force colors will again be featured during the two most patriotic race weekends of the year: July 4 weekend at Daytona (Florida) International Speedway and Veterans Day weekend at ISM Raceway in Phoenix, Arizona.

“The combination of Bubba Wallace and the iconic No. 43 provides a continuing sponsorship opportunity that reflects our Air Force core values of Integrity, Service and Excellence, as well as has a positive impact on generating public awareness about the U.S. Air Force, our people and our mission,” McKnight said. “Like NASCAR, much of our work is based on science, technology, engineering and math principles combined with teamwork and training. This sponsorship is a great way to highlight that connection.”

In his first year partnering with the Air Force, Wallace Jr. engaged with current Airmen and aspiring recruits. He visited four different U.S. Air Force bases, including Randolph in San Antonio, Texas, Seymour Johnson in Goldsboro, North Carolina, Wright-Patterson in Dayton, Ohio, and Shaw in South Carolina. Wallace Jr. participated in different drills at each base and took flight in an F-16 with the 77th Fighter Squadron known as the “Gamblers” at Shaw AFB, SC. Wallace Jr. also spoke with high school students about reaching their goals.

“I was really impressed with all the different aspects of the Air Force, and the different opportunities they offer,” said Wallace Jr. “I was able to visit different bases and see the Airmen in action and actually participate myself. That gets me excited and then I’m able to talk to inspiring students who are looking at a career in the Air Force. I’m pretty humbled to represent the Air Force.”

In addition to various visits away from the track, Wallace Jr. and “The King” Richard Pettymeet young men and women of the Air Force each weekend along with Air Force leadership.

The U.S. Air Force have been loyal partners to us,” added Richard Petty, Co-Owner, RichardPetty Motorsports. “It is special for us because we get to thank the men and women who protect our freedom each weekend. Bubba has really been able to connect with their recruits, too. We’re proud to continue to represent the Air Force on and off the track.”

About Richard Petty Motorsports
A performance and marketing driven company, Richard Petty Motorsports (RPM), co-owned by NASCAR Hall of Famer Richard Petty and successful business entrepreneur Andrew Murstein, is one of the most recognized brands in all of motorsports. RPM is the winningest team in NASCAR Cup history with 273 wins and has business partnerships with national and global leaders. Today the race operation fields the famed No. 43 in the Monster Energy NASCAR Cup Series with driver Darrell “Bubba” Wallace Jr. The team is headquartered in Welcome, N.C.