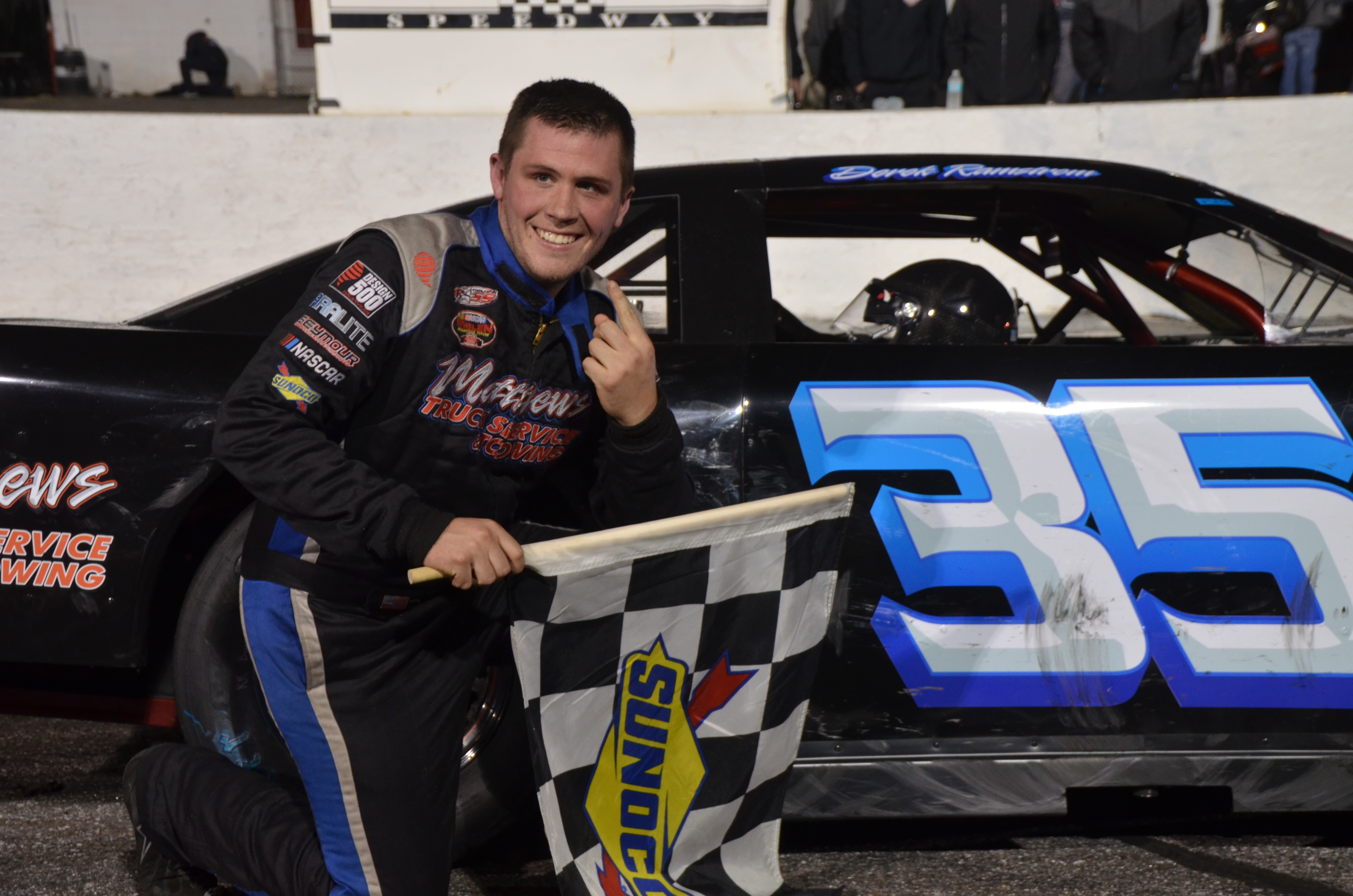 “You know a lot of stuff happened in front of me with the leaders tonight, so things played out in my favor and we earned it,” said Ramstrom in victory lane.  “We’ve had a rough start to the season and we really needed this victory.  Everyone was racing really hard to halfway because we all thought the rain was coming. It was definitely a good time.”

In qualifying, Peltier took his 23rd career quick qualifying time in PASS with a lap of 14.603seconds (89.488MPH).  After the top 10 qualifiers redraw, Peltier would move back to the sixthstarting position, while Tate Fogleman and Mike Hopkinswould move up to the front row.

With rain being a persistent threat throughout the day and into the evening, the competition was fierce as Fogleman jumped into the early lead.  Peltier and fellow Easter Bunny 150 winner, Stephen Nasee, moved to the outside groove early on and bypassed Fogleman for the lead on lap 15.  The first caution of the night would wave on lap 28 for a spin by Christian Rose on the backstretch.

Following the restart, Peltier would slip in turn two allowing Mike Hopkins to move by on the outside and into the lead.  But, after a caution on lap 36 for a spin by Molly Helmuth and Ray Christian, III, Hopkins relinquished the lead, pitting to evaluate a vibration in his car.  This handed the lead back to Peltier, who would be dogged for the next 100 laps by Bubba Pollard.

Over the next 60 laps, Peltier and Pollard would compete in a heavyweight bout for the lead, trading the lead back and forth, as they also traded sheet metal on occasion.  It would come to a head with 16 laps to go as the two made contact down the backstretch and again in turn four, sending Pollard for a spin. Peltier would be placed at the rear of the field with Pollard for his involvement in the incident.

This put Fogleman out front again, until lap 140 when he was bypassed on the outside for the lead by Hopkins.  The caution would wave just three laps later for wall contact by Craig in turn two.  On the restart, both Fogleman and Corey Heim were able to move around Hopkins and into the top two positions.  But, with four laps to go, Fogleman spun after contact from Heim to bring out the caution, resulting in both cars going to the rear.

On the final restart, Ramstrom was able to get by Hopkins for the lead and led the final four laps for his first ever triumph in the Easter Bunny 150.  Following them at the checkers were Brandon Setzer, Travis Stearns, and rookie Justin Crider.  Rounding out the top ten were Pollard, Gracie Trotter, Trey Jarrell, Nasse, and Nicholas Naugle.

The PASS NorthSuper Late Models will be in action next Sundayafternoon, April28 fortheHoney Badger Bar & Grill 150at Oxford PlainsSpeedway in Maine.  WhilethePASS National Championshipwill hit the track again on Sunday, June 23at New Hampshire MotorSpeedwayin Loudon, NHas part of the 3rd Annual New England Short Track Showdown.  Entry forms are currently availablefor Oxford Plainsat ProAllStarsSeries.com.  Be sure to “Like” the Pro All Stars Series on Facebook or follow us on Twitter at @PASSSLM14.