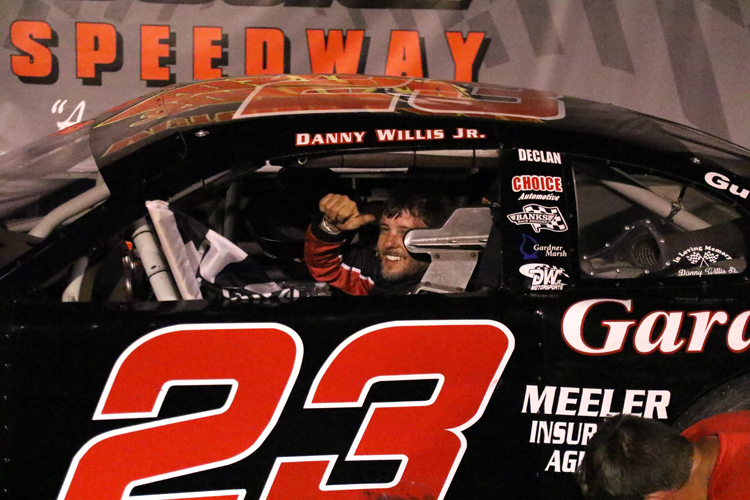 Willis is already a two-time race winner in South Boston’s Limited Sportsman Division this season and is only seven points out of first place in the points standings. He feels back home again in the Limited Division after three seasons of competing in the Late Model Stock Division.

“I still miss racing with the Late Model guys, but the financial part it makes more sense for me to drop back, run Limited and have fun,” said Willis, who won three Limited Sportsman championships at South Boston Speedway before moving up to Late Model in 2016.

“I just put so much pressure on myself running Late Models. We showed we could run up there … we had a win. But again, with my finances, I just couldn’t keep up. This takes some of the burden off of me.”

And it has been fun for Willis so far, especially returning to victory lane.

“So far this move has been working for us.  We’ve had a good time and we’ve won a couple of times,” said Willis, who gets sponsorship help from Gardner Marsh Insurance Agency, Italian Delight Family Restaurant, Southstone Behavior Center, GutterWorx, Meeler Insurance Agency, T&M Farms and Smokin’ Barrels BBQ. “We’re pretty happy with the season so far.”

The big cost-saver for Willis and all Limited teams is tires. South Boston utilizes a “one tire rule” in the Limited division, which simply means after the season-opener teams have been able to purchase only one tire per night.

It also helps that the overall Limited purse was increased this season and shorter races cuts back wear-and-tear on cars.

Willis says the biggest difference in returning to the Limited car has been the reduction in power. “I thought at first it was about the same,” he said. “Then, I tested somebody’s Late Model a couple of weeks ago and realized there’s a ton of difference between the two.”

Willis has also been impressed by the level of competition in the Limited Division this year.

“Daniel (Moss) has obviously been really good (two wins, leading the points), (Jacob) Borst has been strong. When Jessica (Dana) is there, she’s really good and Jason (Myers) is right there, too. It’s tough to win in this division.”

Willis will get a shot at another win Saturday night in the NASCAR Late Model Twin 75s, a six-race program featuring twin 75-lap races for the Late Model Stock Division. There will also be a 50-lap Limited Sportsman Division race, a 30-lap Budweiser Pure Stock race, a 15-lap Budweiser Hornets race and a 25-lap for the regional touring Southern Ground Pounders.

Grandstands open at 5:30 p.m. with the first race set for 7 p.m. Admission is $10 for adults and children 12-and-under are admitted free with a paying adult.