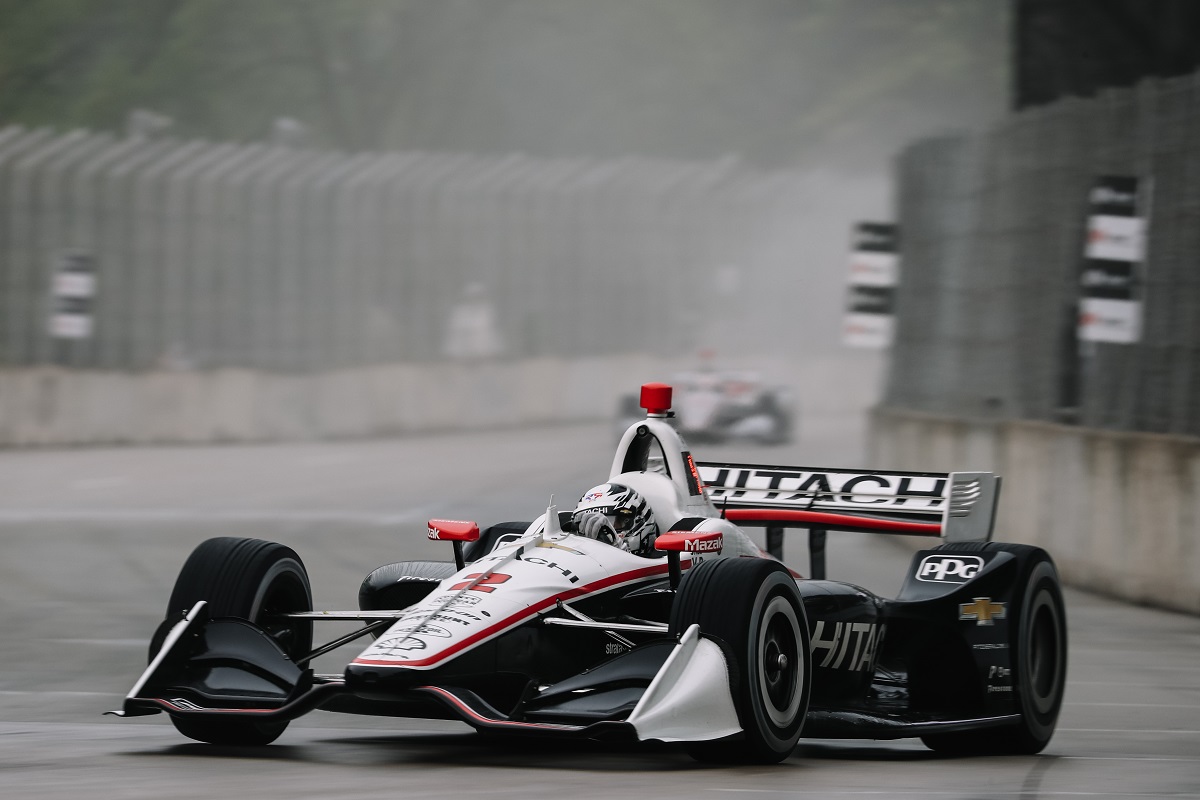 DETROIT (Saturday, June 1, 2019) – A timely pit stop catapulted Josef Newgarden to victory in the rain-shortened opener of the Chevrolet Detroit Grand Prix presented by Lear doubleheader, as well as back into the NTT IndyCar Series championship lead.

Newgarden won Saturday’s race by 0.8237 of a second over Alexander Rossi and capped a perfect day at Belle Isle Park for team owner Roger Penske, whose team also won the IMSA sports car race in the weekend event promoted by Penske’s group.

“It was great to have a victory here,” said Newgarden, whose best previous finish in 13 Detroit races was second place in the second race of 2017. “I think we’ve been strong here in the past. We’ve not been able to fully get a win.

“I think, as a team, we executed. We had the car. We definitely had the compliance, the speed from the car. I think Chevy gave us the power, the drivability. Today was a lot about drivability, especially in the wet. We had all that that we needed.”

Newgarden, in the No. 2 Hitachi Team Penske Chevrolet, made his lone pit stop of Saturday’s 75-minute race on Lap 17, among the first drivers to switch from Firestone’s grooved rain tires to dry-condition slicks. As Newgarden entered pit lane, a full-course caution was called when Ed Jones’ car slid into a tire barrier in Turn 7.

“I think when we pitted was the right time to pit,” Newgarden said. “You could tell the rain tires were starting to go off, the rears were overheating terribly because it was getting dry. You could see Rossi was struggling.

“We pitted at the right time and the yellow helped us even further. It was a great call.”

Newgarden inherited the lead when Rossi and the other frontrunners had to pit for slick tires on Lap 19 during the caution period, and he was never headed over the final 25 laps. It resulted in the 12th win of the Tennessean’s eight-year NTT IndyCar Series career and second this season. Newgarden won the season-opening Firestone Grand Prix of St. Petersburg in March and retained the points lead until teammate Simon Pagenaud won the 103rd Indianapolis 500 presented by Gainbridge six days ago.

The start of Saturday’s race was delayed more than an hour after a thunderstorm moved through the area. INDYCAR adjusted the race from its scheduled 70 laps to a timed event, with 43 laps completed when the checkered flag waved for Newgarden.

The triumph was No. 267 in Indy car history for Team Penske, the most of any team. On the heels of Pagenaud’s May sweep at Indianapolis Motor Speedway – winning the INDYCAR Grand Prix on May 11 and Indianapolis 500 on May 26 – Team Penske drivers have captured the last three series races.

Rossi’s runner-up finish was his fourth top-seven result at Detroit in the past five races. The 27-year-old Andretti Autosport driver has finished first or second in three of the last four races this season – including a win on the streets of Long Beach, California, in April – but wondered what could have been Saturday.

“Yet again we’re on the wrong side of the yellow,” Rossi said of the fateful caution that aided Newgarden. “It’s part of the NTT IndyCar Series. Josef did a good job, didn’t make any mistakes there on the last stint.

“I think (my) car was great. … Ultimately, (we) just got jumped by Josef coming in a bit earlier before that yellow. I tried to push him into a mistake. We were flat out, but he’s a great driver and isn’t going to make mistakes.”

Takuma Sato made a pair of memorable passes late on Ryan Hunter-Reay and Felix Rosenqvist to finish third in the No. 30 Mi-Jack/Panasonic Honda. The Rahal Letterman Lanigan Racing driver has been on the podium in three of the last five races, including a win at Barber Motorsports Park in April.

“I think we played it well,” Sato said. “I think the rain definitely helped us and then (we) made some good position gains. In the end, I think fighting for the podium, on the wet parts and dry parts, were certainly exciting.

“I think it’s always great to be on the podium. Of course, as a race car driver, you always want to win.”

The treacherous conditions led to four full-course cautions in the race, including one when five-time and reigning series champion Scott Dixon clipped the wall in Turn 6 and crashed into a tire barrier. The Chip Ganassi Racing veteran, a two-time Detroit winner, was unhurt but finished last in the 22-car field and slipped to fifth in the championship, 92 points behind Newgarden.

Will Power, another two-time winner at Belle Isle, saw a strong run slip away when he left his pit on Lap 19 without the right-front tire secured. The tire came loose, forcing Power to limp around the 2.35-mile temporary street course on three wheels until he could pit for a new tire and front wing for the No. 12 Verizon Team Penske Chevrolet. Power finished 18th.