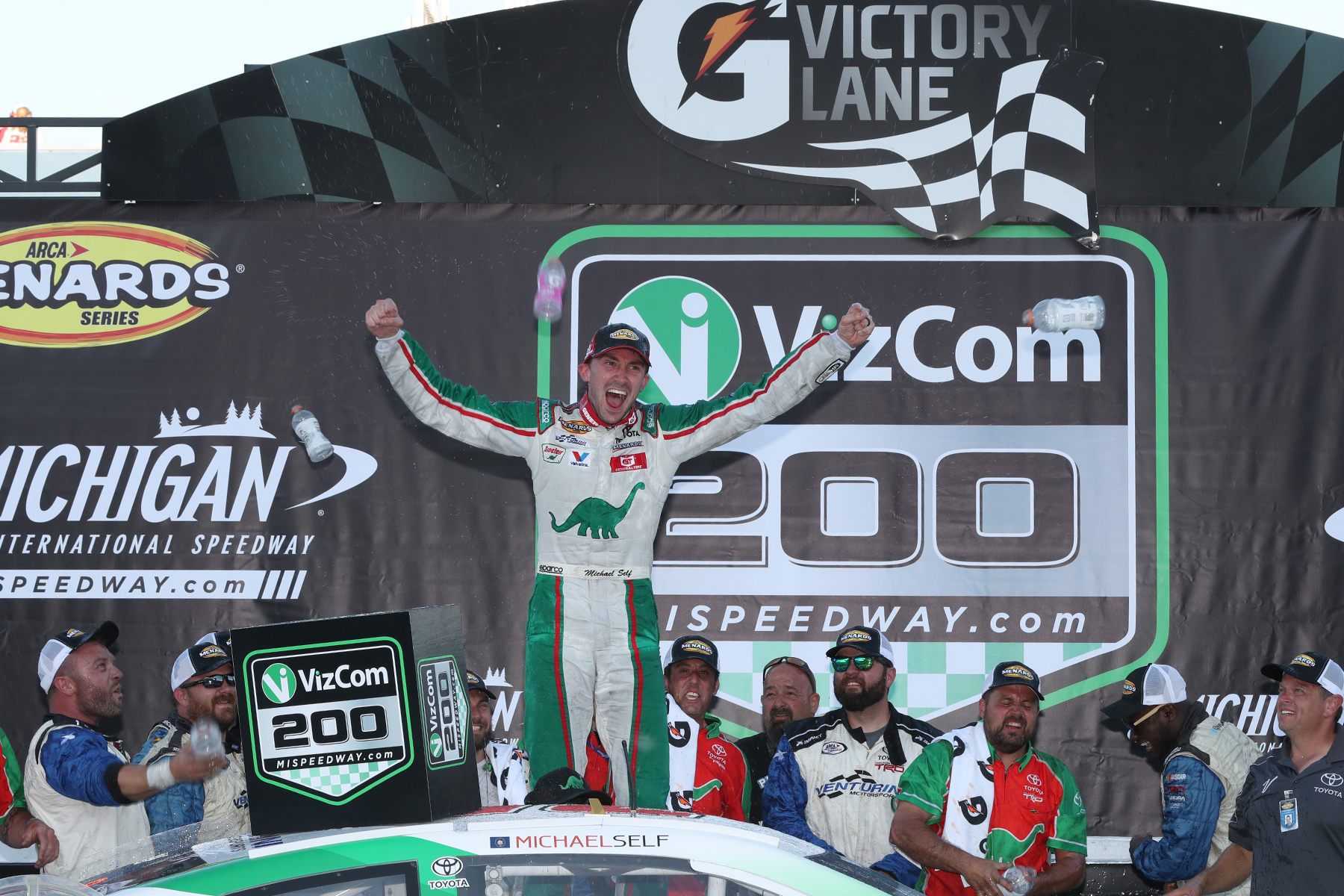 BROOKLYN, Mich. (June 7, 2019) — The ARCA Menard Series VizCom 200 came down to the final turn on the last lap as Michael Self passed Ty Majeski to earn the win.

Self pitted with 11 laps to go for a splash of gas as Majeski stayed out. Majeski, going for his third consecutive win, tried to stretch his fuel over the final 50 laps. Self slowly tracked him down as the laps continued to count down. Self cut nearly a second off a lap and by the last lap Self had Majeski in his sights.

Entering turn three Majeski held the lead, but he ran out of gas. Self pounced and passed Majeski in turn four to take the checkered flag.

“Ty is an awesome driver,” Self said. “They are such a smart team. He is such a smart guy. You can never count them out because they have a smart strategy. But at the end of the day it was these Venturini Motorsports guys.”

Self led 86 laps, the most laps he had led in a win. The victory was Self’s third of the season as he leads the ARCA Menards Series point standings after nine races.

Self dominated the early part of the race as he built nearly an eight second lead over second-place Majeski. Self pitted on lap 46 for a full tank of fuel and four fresh tires.

On lap 46, Brandon McReynolds hit the wall to bring out the first yellow of the race. On the ensuing restart, C.J. McLaughlin spun when Joe Graf Jr. hit him from behind. The field stayed green as Self was back in the lead.

In qualifying, Self stole the stole. He posted the fastest the speed with a mark of 193.050. That mark broke the previous track record and was the quickest in ARCA Menards Series history. He was joined on the front row by teammate Christian Eckes.

The action continues at Michigan International Speedway on Saturday with qualifying for the Monster Energy NASCAR Cup Series FireKeepers Casino 400. In the afternoon, the NASCAR XFINITY Series takes the green flag for the LTi Printing 250.

It has never been easier to purchase tickets and reserve a campsite at Michigan International Speedway in 2019. Fans can visit www.mispeedway.com or call 888-905-7223 to get the best deals. Grandstand tickets start at $49 for the FireKeepers Casino 400 on June 9.

Any guest who purchases a 12 and under ticket will automatically receive a free kids Pit and Driver Introduction Pass courtesy of Henry Ford Health System. Kids can experience pit road on Sunday morning, sign the start/finish line and view the cars and teams up close on race day. Kids will also have access to pre-race ceremonies, including driver introductions.

Nestled in the lush Irish Hills of Southeastern Michigan, Michigan International Speedway is NASCAR’s Most Entertaining Track. It has been the love of NASCAR racing and the thrill of a great time for race fans and drivers alike for 50 years.