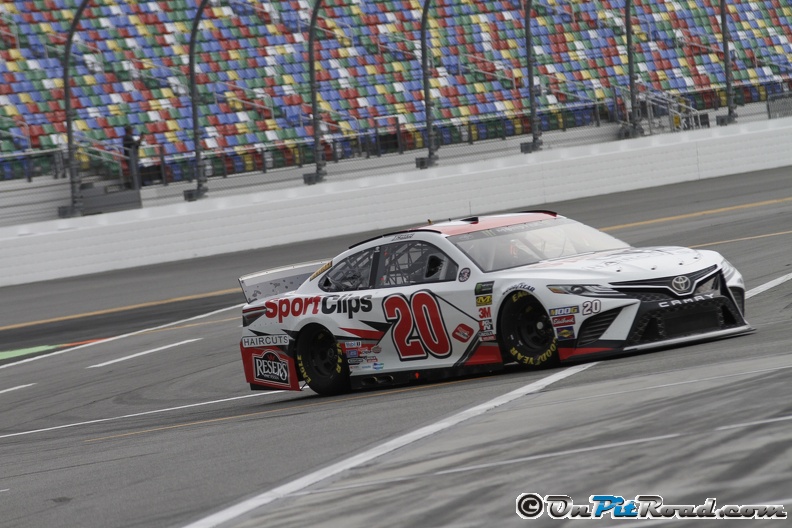 Jones comes to the “World Center of Racing” attempting to repeat as Coke Zero Sugar 400 champion. Hamlin, winner of the DAYTONA 500 earlier this year and in 2016, arrives looking to win the Coke Zero Sugar 400 for the first time and complete a season sweep of Monster Energy Series races at DIS. A season sweep has happened only five times: Jimmie Johnson in 2013, Bobby Allison in 1982, Fireball Roberts in 1962, Cale Yarborough in 1968 and LeeRoy Yarbrough in 1969.

Jones, driver of the No. 20 Sport Clips Toyota, also has another good reason for wanting to win Saturday night. A victory will assure him a spot in the NASCAR Playoffs (contested over the season’s last 10 races), provided he’s in the top 30 in series points when the Playoffs start.

He has reason to be optimistic; in the season-opening DAYTONA 500, Jones finished third. He also has last October’s top-10 run at 2.66-mile Talladega Superspeedway – the “sister” facility to the 2.5-mile DIS tri-oval – as further validation of his capabilities at the two longest, highest-banked race tracks on the NASCAR schedule.

“It (superspeedway racing) has become something I like,” Jones said. “Early in my career, it drove me crazy because I wasn’t very good at it. I didn’t understand it.

“As much as it’s out of your control, it’s also in your control. Just knowing better, situationally, becoming more aware on superspeedways on what situations you don’t want to be in has helped me a lot. I learned more about the draft, how to position yourself, where you need to be at certain points of the race. Learning all those things has helped me enjoy it more.”

Hamlin’s enjoyment during DIS’ summertime NASCAR event has been tempered by uneven results. His best finish in the Coke Zero Sugar 400 is third, in 2009 and ’15. His average finish in the 400: 21st.

“The July race has always been pretty tough on us, finish-wise,” Hamlin said. “I think a lot of it is, you are getting to the point of the season that this is going to be some of the last great opportunities for the under-funded teams to go out there and get a win so they are a lot more aggressive. The racing itself seems to be more chaotic. It’s tough to avoid those crashes. Sometimes you’re in it, sometimes you’re not. In the summer, we’re in it, so we’ve got to figure out how to play it, to win it.”

Practice sessions for both races were on Thursday’s schedule, with the sole session for the Circle K Firecracker 250 led by AJ Allmendinger (No. 10 Cornerstone Produce Group Chevrolet) with a 194.902 mph lap.

There were two sessions for the Coke Zero Sugar 400. Kyle Busch (No. 18 Interstate Batteries Toyota) had a fast lap of 200.754 mph to lead the first session; the second session, run after temperatures had cooled slightly, was led by Martin Truex Jr. (No. 19 Bass Pro Shops/TRACKER ATVs Toyota) with a top speed of 205.935.