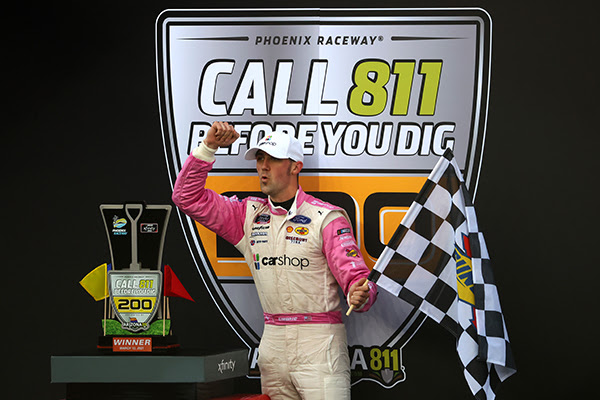 AVONDALE, AZ – March 15, 2021 – Austin Cindric backed up his 2020 NASCAR Xfinity Championship win in Phoenix, scoring his second win at Phoenix Raceway and recording his 10th career win. Cindric took the Ford Mustang to victory lane for the second time in the 2021 season for Team Penske and Ford Performance.

“Congratulations to Austin, Brian, Roger and the No. 22 team,” said Doug Yates, President and CEO of Roush Yates Engines. “Austin raced like a champion, smooth and confident throughout the entire race. We are proud to be part of powering Austin to his 10th Xfinity win with Ford Performance.”

In a late race restart with 2-laps remaining, Cindric led the field back to green from the outside lane. The No. 22 Ford Mustang was able to hold off the hard charging field, crossing the finish line .360 seconds in front of Ty Gibbs. Cindric leads the driver points standings with 248 points, 47 points ahead of second place.

“You have to work hard the rest of the year to get here,” said Cindric in post-race interview. “That is where my focus is. I have my name on the wall there and the goal is to be back here with a shot to do it again.”

The Ford Mustangs ran strong in the NASCAR Cup Series, on Sunday, leading a manufacturer’s high 197 laps in the 312 lap Instacart 500. Four Ford teammates finished in the top-10 led by Stage 2 winner, Joey Logano in P2, Brad Keselowski in P4, Kevin Harvick in P6, and rounding out the top-10 was Stage 1 winner, Ryan Blaney in P10.

The NASCAR Series is headed to ‘Hotlanta’ to race at the Atlanta Motor Speedway and the IMSA Michelin Pilot Challenge Series will strap in to run the second race of the season in Sebring, Florida this weekend.

With an unparalleled culture of winning and steeped in rich racing history, Roush Yates Engines continues to follow the company’s vision to lead performance engine innovation and staying true to the company’s mission, provide race winning engines through demonstrated power and performance.