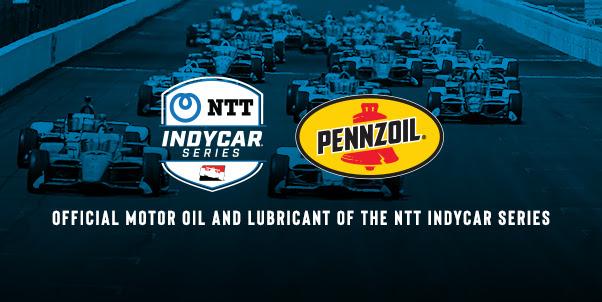 INDIANAPOLIS (Tuesday, April 13, 2021) – Pennzoil® has become the Official Motor Oil and Lubricant Partner of INDYCAR and the NTT INDYCAR SERIES, a new and dynamic multi-year partnership that begins this weekend with the Honda Indy Grand Prix of Alabama presented by AmFirst at Barber Motorsports Park.

The expansive agreement also includes Pennzoil becoming the sponsor of the Pennzoil Technical Inspection area at all 17 NTT INDYCAR SERIES events this season. Pennzoil branding will be placed on INDYCAR’s technical inspection transporter.

“Pennzoil has participated in the INDYCAR SERIES for many decades and during that time enjoyed much success, including the popular Pennzoil-sponsored Indianapolis 500 winners driven by Johnny Rutherford in 1980 and Rick Mears in 1984 and 1988,” said Patty Lanning, vice president, North American Marketing, Shell Lubricants. “At Pennzoil, we are proud to become the Official Motor Oil of INDYCAR to build on our success and legacy on and off the track in one of America’s premier motorsports series.”

Said Selda Gunsel, vice president, Global Commercial Technology, Shell Lubricants: “The extreme stress put on an NTT INDYCAR SERIES engine provides the optimal test bed for modern motor oils like Pennzoil Synthetics. The highly efficient and powerful engine technology used in INDYCAR has presented Pennzoil with an opportunity to innovate and prove that our made-from-natural gas motor oils can make a difference on the track.”

Because Pennzoil is committed to technology and technicians and shares a passion for cars with the experts, it also will celebrate the best mechanic in the series in 2021. Included in the partnership, Pennzoil will sponsor the INDYCAR Chief Mechanic Award, which will provide $50,000 to the chief mechanic of the entry that wins the 2021 NTT INDYCAR SERIES championship.

“Pennzoil has deep roots in INDYCAR racing and is part of the sport’s proud heritage,” INDYCAR President Jay Frye said. “Pennzoil is an industry-leading brand with huge name recognition and a fantastic partner that will engage with our fans in many unique ways, helping to bring the exciting action of the NTT INDYCAR SERIES to more people.”

Pennzoil has been used in competition in Chevrolet engines in INDYCAR since 2012, powering more wins than any other motor oil-and-engine combination in that time. Pennzoil engineers continuously work on the motor oil that goes into the race cars on the track. The on-track performance and data serve as a laboratory for the motor oil Pennzoil introduces for passenger cars, helping make sure that drivers get the most out of their vehicle. Pennzoil Platinum helps extend the life of your engine and protects it for up to 15 years or 500,000 miles, whichever comes first, guaranteed[1] . That’s the same distance it would take to run the Indianapolis 500 … 1,000 times!

This year’s NTT INDYCAR SERIES season kicks off with the Honda Indy Grand Prix of Alabama presented by AmFirst on Sunday, April 18. NBC will provide live coverage starting with a pre-race show at 3 p.m. (ET), followed by the green flag at 3:30 p.m. Coverage also will be available on the INDYCAR Radio Network.

INDYCAR is the Indianapolis-based governing body for North America’s premier open-wheel auto racing series known as the NTT INDYCAR SERIES. The series features an international field of the world’s most versatile drivers – including six-time series champion Scott Dixon, two-time series champion Josef Newgarden and two-time and reigning Indianapolis 500 winner Takuma Sato – who compete on superspeedways, short ovals, street circuits and permanent road courses. The season, which runs from April to September, currently consists of 17 races in the United States and Canada and is highlighted by the historic Indianapolis 500 presented by Gainbridge held annually in May at the Indianapolis Motor Speedway. The NTT INDYCAR SERIES, the Indianapolis Motor Speedway and IMS Productions are owned by Penske Corporation, a global transportation, automotive and motorsports leader. For more information on INDYCAR and the NTT INDYCAR SERIES, please visit www.indycar.com.

Shell Oil Company is an affiliate of the Royal Dutch Shell plc, a global group of energy and petrochemical companies with operations in more than 70 countries. In the U.S., Shell operates in 50 states and employs more than 20,000 people working to help tackle the challenges of the new energy future. The Shell downstream organization manages a portfolio of top-quality brands, including the No. 1 selling premium gasoline, Shell V-Power NiTRO+ Premium Gasoline, No. 1 selling gasoline, Shell Nitrogen Enriched Gasolines and Pennzoil®, the most trusted motor oil brand in America[2].

Shell’s motorsports technical alliances around the world provide a testing ground for fuel and lubricant technologies and products in demanding road conditions. The knowledge Shell and Pennzoil gain through these alliances help address tomorrow’s world mobility energy challenge with efficient solutions that power and protect motorists around the globe. http://www.shell.com, http://www.shell.us, http://www.pennzoil.com.

[1]15 years or 500,000 miles, whichever comes first, guaranteed. Your engine must have less than 125,000 miles and been manufactured in the past 72 months. To maintain your warranty, change your vehicle’s oil and oil filter at least as often as recommended by the vehicle manufacturer. Enrollment required. Keep your receipts. Other conditions apply. See Pennzoil.com/warranty to enroll and for full details and terms.

[2]Based on a survey of licensed drivers conducted by a leading research firm, full year 2020.