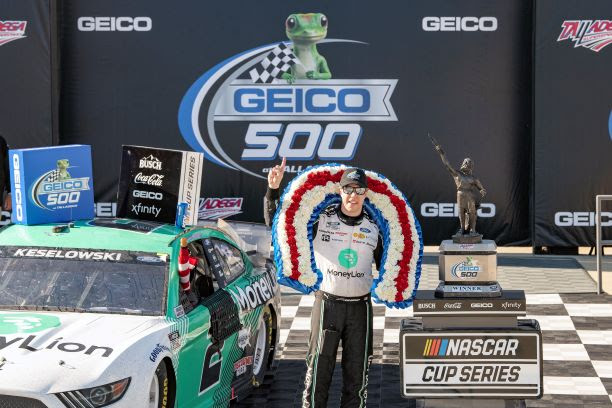 TALLADEGA, Ala. (April 25, 2021) – Despite sustaining damage in an early wreck, and despite leading only one lap in Sunday’s GEICO 500 at Talladega Superspeedway, Brad Keselowski nailed down an opportunistic overtime victory in the 10th event of the NASCAR Cup Series season.

Surging to the front on the final lap, after fellow Ford driver Matt DiBenedetto abandoned the bottom lane and gave Keselowski a clear run to the front, Keselowski claimed his first victory of the season, the 35th of his career and his sixth at Talladega, tying Jeff Gordon and Dale Earnhardt Jr. for second-most all-time at the 2.66-mile track (Dale Earnhardt, Sr. leads in track wins with 10).

“The whole race, I had a couple of opportunities to take the lead, but I just kept thinking, ‘Man, just keep your car in one piece till the end.’ We’ve been so close here, and it just didn’t seem to want to come together here the last few years, and I’ve been on kind of a four-year drought here, but it’s nice to get number six.

“I would have never dreamed I’d tie Jeff Gordon and Dale Earnhardt Jr. here. That’s something. Those guys are really legends. I’m just really proud of my team. We had an accident there early, and they recovered and got it fixed up to where I could keep running. My crew chief, Jeremy Bullins, had a lot of confidence.

DiBenedetto held the lead at the white flag in overtime, which took the race three laps beyond its posted distance. But the driver of the No. 21 Wood Brothers Ford moved up the track – uncovering Keselowski behind him — to block a run by Blaney. Keselowski used a strong push from McDowell to charge to the lead.

Joey Logano had a much shorter day on track than his winning Team Penske teammate. As the lead pack of cars approached the green/checkered flag to end the first 60-lap stage of the race, an aggressive push from Ricky Stenhouse Jr. forced Denny Hamlin out of line. In the process, Hamlin hooked the left rear of Logano’s car, which got airborne off the bumper of Stenhouse’s Chevrolet, turned upside-down, landing on its roof and barrel-rolled before righting itself. Keselowski’s car also sustained minor damage in the incident.

When Logano’s car bounced on its roof, his head hit the roll bar.

“It’s nobody’s fault,” Logano said after a mandatory visit to the infield care center. “Denny is trying to go and the 47 (Stenhouse) is trying to go. It’s a product of this racing. We have to fix it, though… At the same time, I’m appreciative of driving a car that is this safe and what Team Penske has done for the safety of these cars so that I can live to talk about it and go again.

“I got lucky that I didn’t get hit while I was in the air.”

The end of the second stage also produced fireworks, and once again, Hamlin was at the center of the maelstrom. As the top lane accordioned behind Keselowski, who was running second at the time, Martin Truex Jr. tapped Hamlin from behind, turning the No. 11 Toyota into the wall.

Truex then spun sideways, sustaining damage. Behind him, Byron steered down the track to the avoid the wreck and collected Hendrick Motorsports teammates Alex Bowman and Chase Elliott in a chain-reaction collision. Bowman couldn’t get his car repaired in the requisite six minutes and fell out of the race in 38th place.

Talladega Superspeedway’s next action will take place in NASCAR’s Playoffs, Oct. 2-3, with a tripleheader. Saturday, the NASCAR Xfinity Series and the NASCAR Camping World Truck Series while on Sunday’s it’s the YellaWood 500 for the NASCAR Cup Series. For information about how fans be a part of the iconic weekend, they can log onto www.talladegasuperspeedway.com or call 1-877-Go2-DEGA.