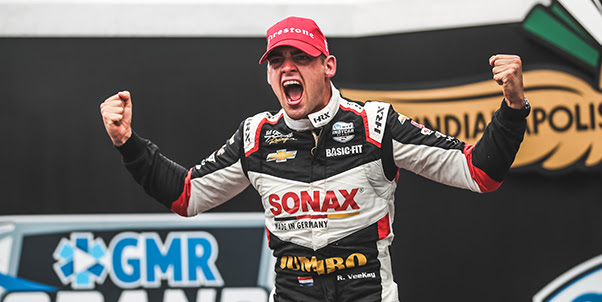 With the Indianapolis 500 right around the corner, many drivers are and were hoping to start the two-week stretch off right with a victory. Insert Neatherlands driver Rinus VeeKay driving for Ed Carpenter Racing, who gained his first IndyCar victory after starting seventh and leading 33 of the 85 scheduled laps.

“It was an amazing day,” VeeKay said about the victory. “To start with this morning, we started in the warmup fastest lap time. Of course, doesn’t say too much, but the car felt amazing, very good on the long run, even though we only did blacks.

But then we went to the reds, learned from last year because we had many races here, that the reds were very
good in the long run, and yeah, just start was great, had a great ability to pass other cars, and strategy was amazing by the team. So everything was just on it. Amazing day, and definitely one I will remember for the rest of my life.”

As the month of May has been for the last few years, the stretch of activities at Indianapolis begins with the Indianapolis Grand Prix at the Indianapolis Road Course. Continuing a string of first this season, Romain Grosjean qualified his Dale Coyne Racing with Rick Ware Racing entry on the pole in his third IndyCar start.

When the 85 lap race began, there was already caution on Lap 1 for the No. 20 of Conor Daly who came to a stop in Turn 1. The first lap yellow created some unique pit sequences as the No. 9 of Scott Dixon and last week’s Texas winner Pato O’Ward, and the No. 15 of Graham Rahal made their first stops.

The initial green flag flew on Lap 4 and race fans saw the No. 51 of Grosjean leading the field out of Turn 14 where the start/finish line was placed. Grosjean led second-place Jack Harvey by two seconds on Lap 7. He continued to stretch the lead to just 3.3 seconds a few laps later before green-flag pit stops began on Lap 11.

At Lap 12, VeeKay, Rossi, and Montoya all made their stops, and Harvey on Lap 13. This left Barber winner Alex Palou in second trying to chase down leader Grosjean who both did not make their stops as of Lap 20. Grosjean led Palou by 4.3 seconds.

The leaders Palou and Grosjean wouldn’t be seen on pit road for their first stops until Lap 25 where they changed for four tires and fuel. However, due to Scott Dixon pitting earlier in the race, he was scored briefly as the leader before making a stop on Lap 28.

As Dixon surrendered the lead, Grosjean cycled out on the same lap and had Harvey continuing behind him who was two and a half seconds back.

With Harvey running in second, Grosjean continued to have the best car and had a lead of four seconds on Lap 35. Unfortunately, troubles would find Harvey after he made a stop on Lap 38. The Englishman had a right-rear flat go down after making his pit stop, which thus ended any hopes of securing a strong run.

Meanwhile, things began to get interesting heading into another round of stops. At Lap 36, VeeKay took to pit road while race leader Grosjean didn’t make a stop until Lap 43. However, while VeeKay was leaving the pits he got caught up between a battle of Jimmie Johnson and Alex Palou. VeeKay would split the middle, making a tense situation, but made the pass work.

By playing a different strategy than Grosjean, VeeKay cycled out to the lead on Lap 65 and led Grosjean by 7.8 seconds. Lap after lap, VeeKay’s lead grew ever so slightly and really had no pressure other than trying to pass lap down cars with ease. The only chance Grosjean could have was either a late-race yellow or VeeKay making a mistake.

Nevertheless, no mistake was made by VeeKay the Ed Carpenter Racing driver took home his first IndyCar victory in just his 19th start and became the sixth youngest winner in IndyCar history at 20-years, 8 months, and 3 days old. VeeKay also scored Ed Carpenter’s first victory since July 2016 at Iowa Speedway. And just how confident does VeeKay feel about the Indy 500? He wants to win all over again.

“Let’s do both,” VeeKay continued. I am very, very excited to get going for the 500. Yeah, Ed Carpenter Racing makes very, very good Indy 500 cars, and everyone is super motivated. It’s the biggest race of the year for them. But to finish off the Indy Grand Prix just before with a win is a big, big confidence boost for everyone at the team.”

Up Next: The next NTT IndyCar Series race is the 105th running of the Indianapolis 500 live May 30 on NBC. However, there will be four days of practice for the Indy 500 beginning Tuesday afternoon May 18 live on Peacock television with a subscription.