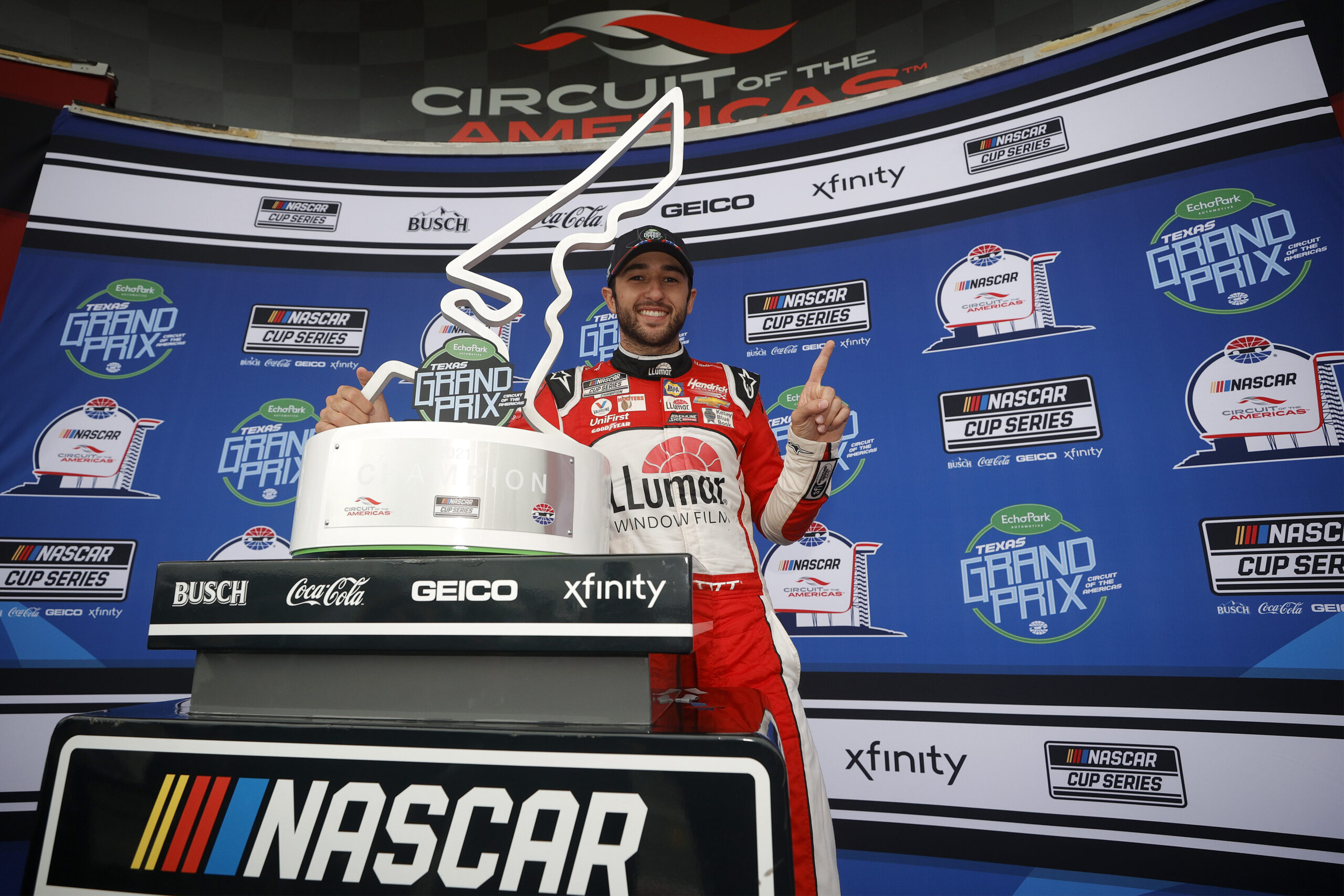 AUSTIN, TEXAS - MAY 23: Chase Elliott, driver of the #9 Llumar Chevrolet, celebrates in victory lane after winning the NASCAR Cup Series EchoPark Texas Grand Prix at Circuit of The Americas on May 23, 2021 in Austin, Texas. (Photo by Chris Graythen/Getty Images)

AUSTIN, Texas (May 23, 2021) – Chase Elliott was declared the winner Sunday in a rain-shortened EchoPark Automotive Texas Grand Prix in the NASCAR Cup Series’ inaugural visit to the challenging Circuit of The Americas road course. With Elliott leading, NASCAR officials called the race due to inclement weather with 14 laps remaining in the 68-lap race.

Elliott, the defending series champ, took the lead from Hendrick Motorsports teammate Alex Bowman and his No. 48 Chevrolet at lap 50 and led five laps before a caution came out on lap 53 for weather. Elliott, driving the No. 9 Hendrick Motorsports Chevrolet, secured his sixth career road course win and his fifth in the last six road course races. It also marked his first victory of this season and the milestone 800th NASCAR Cup Series win for Chevrolet.

“I couldn’t be more excited. I’ve never won a rain race before, so it’s kind of cool,” Elliott said. “And I’m just super proud of our team for just continuing to fight. We started the day, and we weren’t very good. I just kept pushing myself and we kept making some good changes throughout the day and got to where I thought we were on pace with those guys there at the end. So, I’m really proud of that… I’m looking forward to next week and trying to keep it rolling.”

The race on the 3.41-mile, 20-turn winding layout opened with spits of rain forcing teams to choose between racing slicks and wet-weather tires for the green flag. The majority took the slicks, which prompted a quick round of pit stops for those teams as the rain increased. Pole-winner Tyler Reddick led the first lap and then Team Penske’s Austin Cindric, the Xfinity Series points leader making one of his scheduled Cup starts, led the next four laps on slicks before he spun out and had to pit to change tires.Cindric teammate Joey Logano grabbed the lead on lap 11 and led the final five laps to win the first stage.

Rain continued to increase at the end of the first stage and during the opening of the second stage.

Visibility issues through the rainy mist created by the cars’ wake was a factor in a pair of incidents in Stage 2 that took out several contenders. In the first, Bubba Wallace ran into the back of Kevin Harvick’s car, which also collected Christopher Bell, Ricky Stenhouse Jr. and Ryan Blaney in the aftermath. The cars of Wallace, Bell and Harvick sustained enough damage to be sent to the garage.

In the second incident, which occurred at lap 24, Martin Truex Jr. hit the back of Michael McDowell’s car and then Truex’s damaged vehicle was hit by Cole Custer’s No. 41 Ford at speed, lifting the No. 19 Toyota high into the air. Custer’s car then careened to the left and hit an outside retaining wall and caught fire. None of the drivers were injured in either of the incidents.

NASCAR officials then sent out the Air Titan trucks to help clear some standing water from the track before Stage 2 resumed. Kyle Busch won the second stage after leading the final five laps. Busch, who won the Xfinity race on Saturday, led 12 laps and appeared to be on his way to a weekend sweep in his No. 18 Joe Gibbs Racing Toyota.

Green flag pit stops shuffled the field and Kyle Larson, Ross Chastain and Bowman all led laps before Elliott took over on lap 50.

Elliott’s sixth career road course victory puts him closer to NASCAR’s all-time road course winner Jeff Gordon, who has nine victories, and Tony Stewart, who has eight. He says he is dedicated to being a strong contender at all venues, not just road courses.

“At the end of the day we have to continue to push ourselves and try to be better and try to push forward at all tracks, not just road courses,” Elliott said. “A win is a win at all of them and I’m going to enjoy them all.

“These races are too hard to win to pick and choose on the how, you want to win them without rain to change the normal distance. A win is a win, and it’s a big win today for our team and for Chevrolet.”

Denny Hamlin maintained the points lead despite finishing 14th in the No. 11 Joe Gibbs Racing Toyota. He leads William Byron, who finished 11th in the No. 24 Hendrick Motorsports Chevy, by 98 points. Larson is third (-110), Logano fourth (-111) and Elliott fifth (-116).

The NASCAR Cup Series moves on to Charlotte Motor Speedway for its annual Memorial Day weekend running of the prestigious Coca-Cola 600 on Sunday, May 30, at 6 p.m. ET (FOX, PRN Radio).