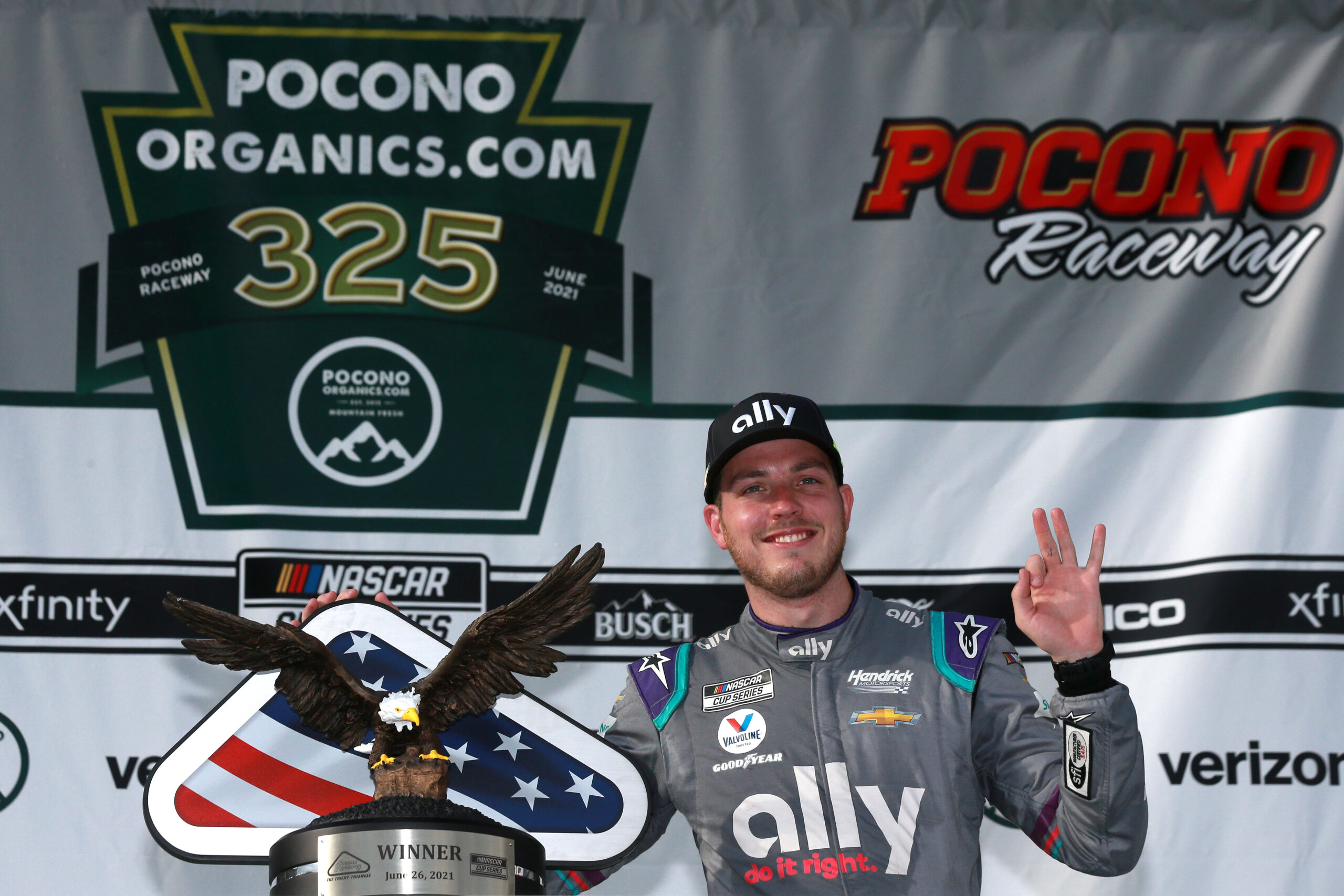 After an intense, nail-biting battle over the last 29 laps at Pocono Raceway, Alex Bowman won Saturday’s Pocono Organics CBD 325 when his Hendrick Motorsports teammate Kyle Larson blew a left-front tire while leading within one corner of the finish line.

Bowman’s victory ended a streak of three-straight wins for Larson, who passed Bowman’s No. 48 Chevrolet on Lap 127 of 130 and appeared destined to become the first driver since Jimmie Johnson in 2007 to win four straight NASCAR Cup Series races.

Choosing the inside lane for a restart on Lap 112, Bowman surged into the lead, having gained track position with a two-tire call on his final pit stop. Larson spent the next 15 laps harrying his teammate and made what appeared to be the winning pass as the cars entered the Tunnel Turn on Lap 127.

But three laps later, on the short straightaway between Turns 2 and 3, Larson’s left front went flat, and the No. 5 Chevrolet rocketed into the outside wall in Turn 3. Larson came home ninth in his damaged Camaro, his first finish outside the top two in seven races.

Bowman, who announced a contract extension with Hendrick last weekend at Nashville, won for the third time this season, the first time at Pocono and the fifth time in his career. The victory was the sixth straight for Hendrick Motorsports, matching a string of six combined wins by Johnson and Jeff Gordon in 2007.

“Yeah, I hate to win one that way, but hell, yeah, I’ll take it,” a shocked Bowman said after climbing from his car. “Super proud of this Ally 48 team. Man, we kind of gave the lead away. We were on two tires, just got super tight. Tried to hold (Larson) off as long as I could.

“(Crew chief) Greg (Ives) and all the guys did a really good job. We didn’t run that good all day, so I’m kind of in shock. I don’t know what to say to you guys. Hell, yeah, so cool to see all the fans out here. Always like to come to ‘PA.’ It’s a cool place, beautiful weather, great day for a race. Heck, yeah, I’ll take it.”

Larson was just as shocked at the loss as Bowman was at his victory.

“I guess disbelief still,” Larson said after a mandatory trip to the infield care center. “I don’t know, a little bit laughable, just because I can’t believe it.

“Hate that we didn’t get another win. Would have been cool to win five in a row (assuming another victory in Sunday’s second leg of the NASCAR Cup doubleheader). Just wasn’t meant to be I guess today. I felt something like right in the middle of the Tunnel (Turn). Wasn’t quite sure what it was yet. It finally kind of shredded halfway through the short chute there. Couldn’t turn.

“Hate that we didn’t get the win. Cool that Alex still did, a Hendrick car with another win. Cool to keep Mr. H’s (team owner Rick Hendrick’s) streak going. Yeah, hate we didn’t get HendrickCars.com into Victory Lane, but we’ll try to start another streak (on Sunday).”

Larson will have to start Sunday’s race from the rear of the field in a backup car. Bowman will start 20th after an inversion of the top 20 finishing positions from Saturday’s race.

In an event that featured a hodgepodge of pit strategies before it distilled into the closing Bowman-Larson battle, Kyle Busch led a race-high 30 laps and finished second, .683 seconds behind Bowman. William Byron, Denny Hamlin and Ryan Blaney completed the top five.

“We were a tick—just a little bit—slower than Larson, and we were able to hold him off,” Busch said of the green-flag run before the final caution for debris on Lap 107. “The 48 (Bowman) held him off forever and finally the 5 (Larson) got by and got away by 20 lengths or so.

“I was just dying tight behind those guys. I just could not do anything in traffic. We were just struggling in traffic. We don’t have what we need to slice through traffic. Everybody’s hindered, but it seems like us a little bit more.”

By finishing 20th on Saturday, however, Buescher earned the pole position for Sunday’s race.