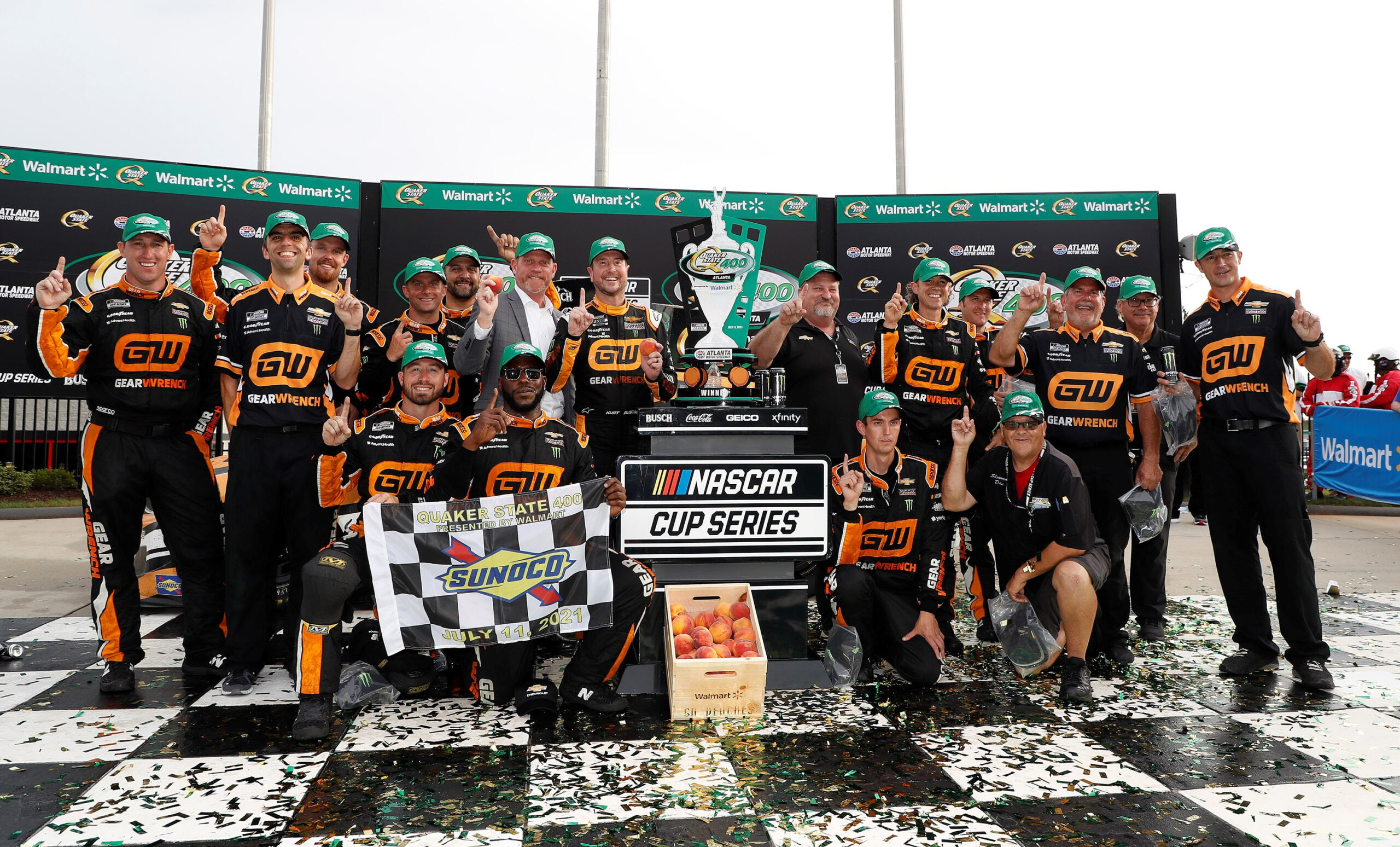 HAMPTON, Ga. (July 11, 2021) – The Busch brothers locked horns in a long-ranging battle that thrilled the crowd at Atlanta Motor Speedway on Sunday.

The elder Busch, Kurt, came up clutch to win the Quaker State 400 Presented by Walmart on a track he doesn’t miss a chance to laud. Kurt Busch won at AMS for the fourth time, the most among active drivers, in the last NASCAR Cup Series race before the track is repaved and reprofiled for 2022.

“Hell, yeah! We beat Kyle!,” Kurt said with a fist pump and a chortle in front of the raucous crowd. “I taught that kid everything he knows.

“What a battle. What a genuine, awesome, old-school race track. I just asked the track today, ‘Last time here on your old asphalt, can I have an old-guy win?’ And she answered. Thank you Atlanta Motor Speedway!”

Kyle Busch gave it his all in the runner-up performance. His No. 18 was second when he pitted for the final time with 49 laps to go. Kurt followed on his next pass, but wasn’t fast enough off pit road to prevent Kyle from taking the lead.

Kurt pulled even to race door-to-door with 23 laps left. A spirited, side-by-side duel lasted for nearly a lap before Kurt found his opening to slip by. The No. 1 Gearwrench Chevy grabbed the lead with an assist from young teammate Ross Chastain.

“Shake and bake! Shake and bake, No. 42,” Kurt said with a laugh. “Ross is going to get a little flack for it, but that’s what it takes to be a good teammate at the right moment.”

“I had everything I had and then smoked it behind the 42,” Kyle Busch said. “Shows you what kind of driver he is. When I got past, I had one valiant effort off of (Turn) 2, but just didn’t have enough momentum to drag him down.”

The brothers ran a helix pattern on Lap 253 of 260 with Kyle briefly getting ahead, but Kurt reeled him in and rocketed to his 33rd Cup victory. It ties him on the all-time rankings with Fireball Roberts.

“The guys gave me a great piece,” Kyle said. “We were fast. (The No.) 1 was definitely better than us today. I just thought I had him. And we did. But the racing didn’t play out for us.”

The two finished 1-2 for the fourth time and Kurt tied the series with the win. He’s come a long way since his first start at Atlanta Motor Speedway when he missed the cut to qualify in 2000. Kurt Busch earned his first AMS win in 2002 and savored another sweet victory Sunday.

“Now to win this on the old surface, I’m very appreciative of today and to be able to win at Atlanta Motor Speedway in the last running on this asphalt,” he said to the crowd.

“This has been one of those years where I knew we were going to have our back up against the wall trying to make the (playoff) cutoff.”

Hometown favorite Chase Elliott started on the pole. He was overtaken by Kyle Busch 14 laps into the race and then was dropped to 18th for overshooting his pit box during a competition caution four laps later. Elliott climbed back up into the top 10 during Stage 2 and finished seventh.

“We had a long day for sure,” he said. “We changed a bunch of stuff throughout the day and just kept grinding.”

The Busch brothers took up their 1-2 positioning early when they overtook then-leader Denny Hamlin following a Lap 36 restart. They carved out a significant 4.5-second lead over the field by Lap 55.

Kyle Busch won Stage 1 with Kurt lurking just 1.63 seconds back. The No. 1 jumped to the front coming off pit road during the yellow between stages.

With rain threatening, Aric Almirola and Ryan Preece opted not to pit with the leaders and roll the dice on getting to the midway point of the race. The gamble and the rain fizzled, allowing the Busch brothers to run them down on new tires.

The race was briefly red-flagged on Lap 167 when a hole opened up in the asphalt, which will be replaced and reworked for 2022. The delay didn’t douse the building tension, thanks to the Busch brothers. Following his triumph, Kurt was awarded the trophy and a chunk of the old racing surface.

The NASCAR Cup Series continues the 2021 tour on July 18 with the Foxwoods Resort Casino 301 at New Hampshire Motor Speedway.