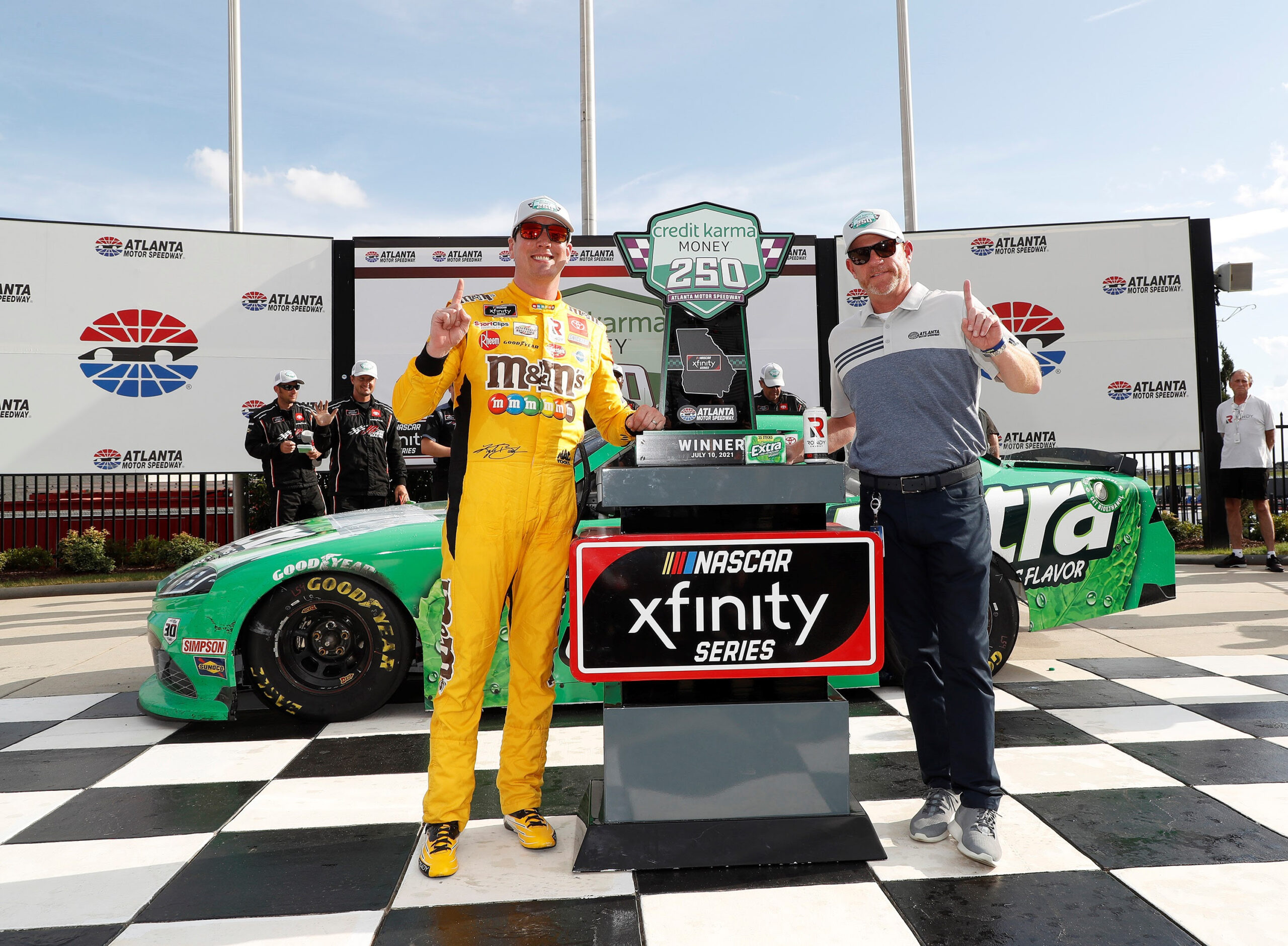 HAMPTON, Ga. (July 10, 2021) – Kyle Busch went out on top in the Credit Karma Money 250, though it wasn’t as vigorously celebrated as some of his 101 others in the NASCAR Xfinity Series.

Coming out of caution with six laps to go Saturday at Atlanta Motor Speedway, Busch lined up behind leader and teammate Daniel Hemric. Busch gave Hemric a bump as they went to green. The move went sideways, as did Hemric.

“(I’m feeling) what could have been, I guess,” said Hemric, who was bidding for his first NASCAR win after nine runner-up finishes. “As soon as he touched me, it just steered me off the left rear and right into the fence and that was it. I tried to hang on to the Poppy Bank Toyota Supra, but it just wasn’t meant to be.”

After Hemric’s No. 18 hit the wall, the race ended with a caution-filled finish and a familiar sight. Busch won his 102nd Xfinity race — Mark Martin is second with 49 — and became one of just a handful of drivers to win five in a row on the series.

“I meant to push him,” Busch said. “I wanted to hit him. I just wanted to hit him more forward and straight. But I turned him sideways a little bit. I was just trying to help a teammate. That’s why I restarted behind him.

“It was a great day for the 54 car, but the 18 was better and deserved this win. So I’m sorry to Daniel and those guys. I hate it that all that transpired. That’s why this win is a little more somber than some because you don’t take solace in a win like that.”

Busch had stated he’d hang up his helmet in the Xfinity Series once he reached triple-digit wins. He didn’t waiver on that stance after his victory.

Busch led 97 laps and held off a furious charge from Jeb Burton in the final two laps. Burton languished in the back half of the field for the first two stages, both of which were won by Busch, but hounded the No. 54 on the final restart searching for a path to victory. He ultimately finished .550 seconds behind Busch.

Noah Gragson was third after battling up front for much of the race. Justin Haley was fourth and Ty Dillon was fifth. Brett Moffitt, Justin Allgaier, Jeremy Clements, 18-year-old Sam Mayer and Austin Cindric rounded out the top 10.

Austin Dillon was 11th after jumping into Michael Annett’s No. 1 car minutes before the race started to sub for the injured driver.

The NASCAR Cup Series is next up in Atlanta with Sunday’s Quaker State 400 Presented by Walmart. Tickets for Sunday’s race (3:30 p.m. ET) are available online at www.AtlantaMotorSpeedway.com.

About the Quaker State 400 Presented by Walmart:

New for 2021 the Quaker State 400 Presented by Walmart headlines the summer slate of NASCAR racing at Atlanta Motor Speedway.

The Quaker State 400 Presented by Walmart will be the first NASCAR Cup Series race held at Atlanta Motor Speedway in the month of July since 1974. The 400-mile race is sure to be one of the most challenging races of the summer for NASCAR’s best.

More information on the July 10-11, 2021 Quaker State 400 Presented by Walmart and ticket availability can be found online at AtlantaMotorSpeedway.com or by calling 877-9-AMS-TIX.