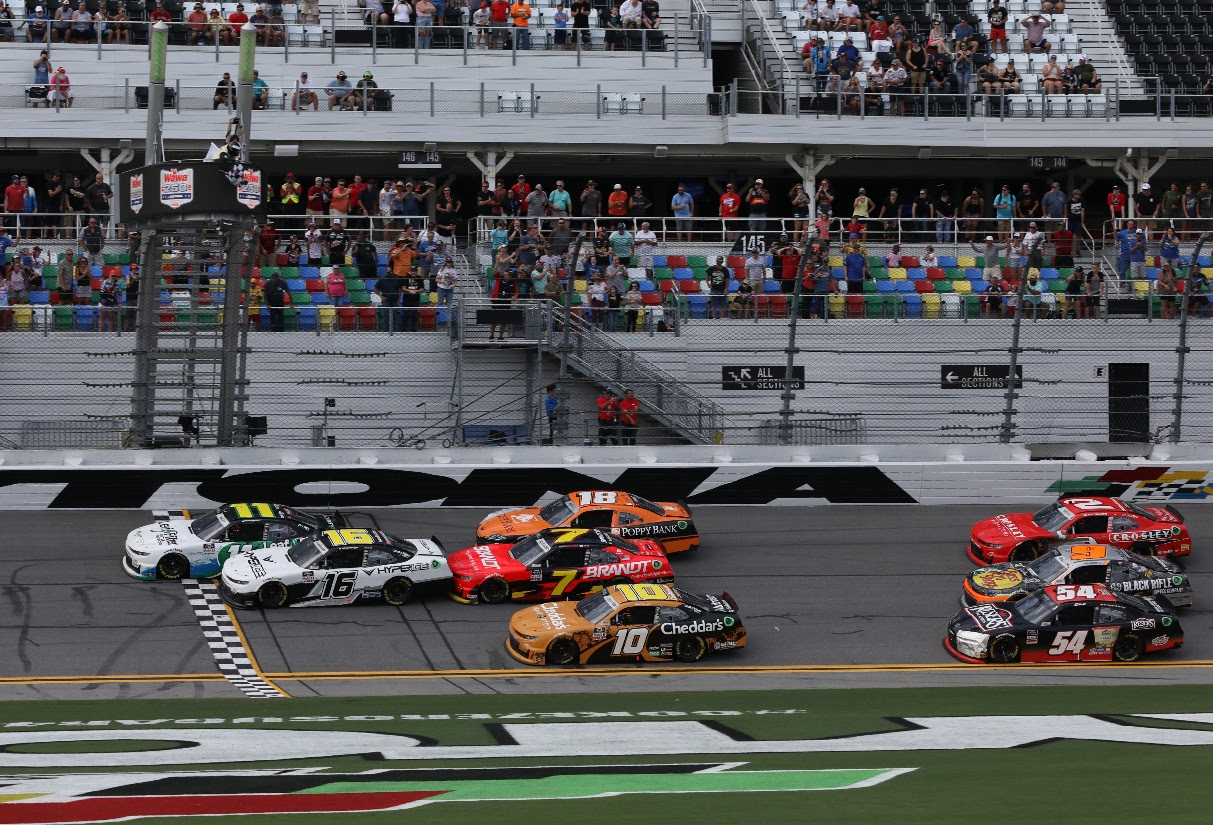 DAYTONA BEACH, Fla. (Aug. 28, 2021) – Coming to the checkered flag, Justin Haley nudged his No. 11 Kaulig Racing Chevrolet just ahead of his teammates A.J. Allmendinger and Jeb Burton in a thrilling three-wide finish in the Wawa 250 NASCAR Xfinity Series race at Daytona International Speedway on Saturday afternoon.

The blink-of-an-eye .023-second victory marked the fourth superspeedway victory for the 22-year-old Haley but his first win of the 2021 season. The race was halted due to inclement weather Friday after only 19 laps but resumed at 12:30 p.m. ET Saturday. Haley has three wins on the Daytona high banks, also including one in a rain-shortened NASCAR Cup Series race here two years ago.

Allmendinger, who took the white flag in front of the field, may have just missed the race trophy, but he led the most laps on the day (30) and his runner-up effort was good enough to take the season driver standings lead by 17 points over defending series champion Austin Cindric, who was sidelined after a Lap 27 incident.

Although Haley and Allmendinger’s third Kaulig Racing teammate Jeb Burton made it a three-wide photo at the line, JR Motorsports driver Justin Allgaier actually nudged just ahead in the middle to officially take third place. Burton was credited with fourth place, followed by Joe Gibbs Racing’s Daniel Hemric, whose fifth-place finish was a massive comeback after his No. 18 was involved in the same early-race incident that took Cindric out.

“This has just not been the best season, it’s been really, really hard on this No. 11 LeafFilter team all year,” said an emotional Haley, who teared up in car congratulating his crew after the checkered flag. “We’ve had a lot of bad luck.

“I was trying to formulate a plan there and obviously there were team orders. Hats off to Kaulig Racing. I think we’ve got the teammate thing down. It’s just so special to win here at Daytona.”

“I’ve won twice here and neither time did I get to see anyone [fans] on the frontstretch, so thank you guys for being here,” he told the cheering crowd. “I love you”

The first 19 laps of the 100-lapper ran on Friday night, but Florida rain showers forced the Saturday matinee. The competition resumed, however, in the kind of typically flat-out, thrilling superspeedway storyline that NASCAR fans have become accustomed to.

“That was like the perfect photo shoot right there coming across the line for all the Kaulig Racing Chevys,” Allmendinger said with a huge grin. “Proud of my ‘son’ Justin Haley. He might be one of the best we’ve ever seen on superspeedways and Jeb did a fantastic job.

“I was just hanging on in the middle there. I thought we might get it [1-2-3 finish] but proud of everyone at Kaulig Racing.”

Haley and Burton won the opening two stages in an action-packed afternoon that had great impact on the championship chase.

Cindric, the defending Xfinity Series champion and a series best five-race winner in 2021, has led the series standings all season. But he was involved in a five-car accident toward the front of the field on Lap 26 that eliminated him from the race less than a half hour after it re-started.

Cindric’s No. 22 Team Penske Ford was hit from behind by Snider’s No. 2 Richard Childress Racing Chevrolet entering Turn 1 sending a handful of cars into save-mode, with several – including top-10 finishers Hemric and Snider – suffering damage but returning to the race.

The hard hit into the inside retaining wall did enough damage to Cindric’s Ford, however, it could not continue. It marked the second straight race the 22-year-old was sidelined before the second stage even began. He finished 37th at Michigan last week after being collected in a seven-car accident only 12 laps into the race.

“Pretty upset for our Ford Mustang, two weekends in a row we’ve had race winning capable cars and I’ve had probably a total of 40 laps in the last two weeks,” Cindric said. “Really frustrating to have that situation play out so early. It only takes one, sometimes.”

Coming into the Daytona race, Cindric held a 35-point advantage over Allmendinger. Now he trails by 17 with only three races remaining to set the 12-driver Playoff field.

The top-10 work by Riley Herbst was significant in terms of the Playoffs. He came into the race ranked 12th, but was able to extend his lead ahead of Michael Annett (30th) and Brandon Brown (34th) who both had bad luck days at Daytona.

Fans can still purchase tickets for Saturday night’s Coke Zero Sugar 400 (7:30 p.m. ET start) starting at $49 for adults and $10 for kids 12 and under. For ticket information, visit www.daytonainternationalspeedway.com, call 1-800-PITSHOP or stop by the Speedway Ticket and Tours Building outside the track off International Speedway Blvd.

The NASCAR Xfinity Series returns to Daytona International Speedway as a part of Speedweeks Presented by AdventHealth on Saturday, February 19, with the Beef. It’s What’s For Dinner. 300, the day before the 64th running of the Great American Race – the DAYTONA 500.

About Daytona International Speedway
Daytona International Speedway is a state-of-the-art motorsports facility and was awarded the SportsBusiness Journal’s prestigious Sports Business Award for Sports Facility of the Year in 2016. Daytona International Speedway is the home of The Great American Race – the DAYTONA 500. Though the season-opening NASCAR Cup Series event garners most of the attention – as well as the largest audience in motorsports – the approximately 500-acre motorsports complex, also known as the World Center of Racing, boasts the most diverse schedule of racing on the globe. In addition to at least nine major event weekends, the Speedway grounds are also used extensively for events that include concerts, civic and social gatherings, car shows, photo shoots, production vehicle testing and police motorcycle training.