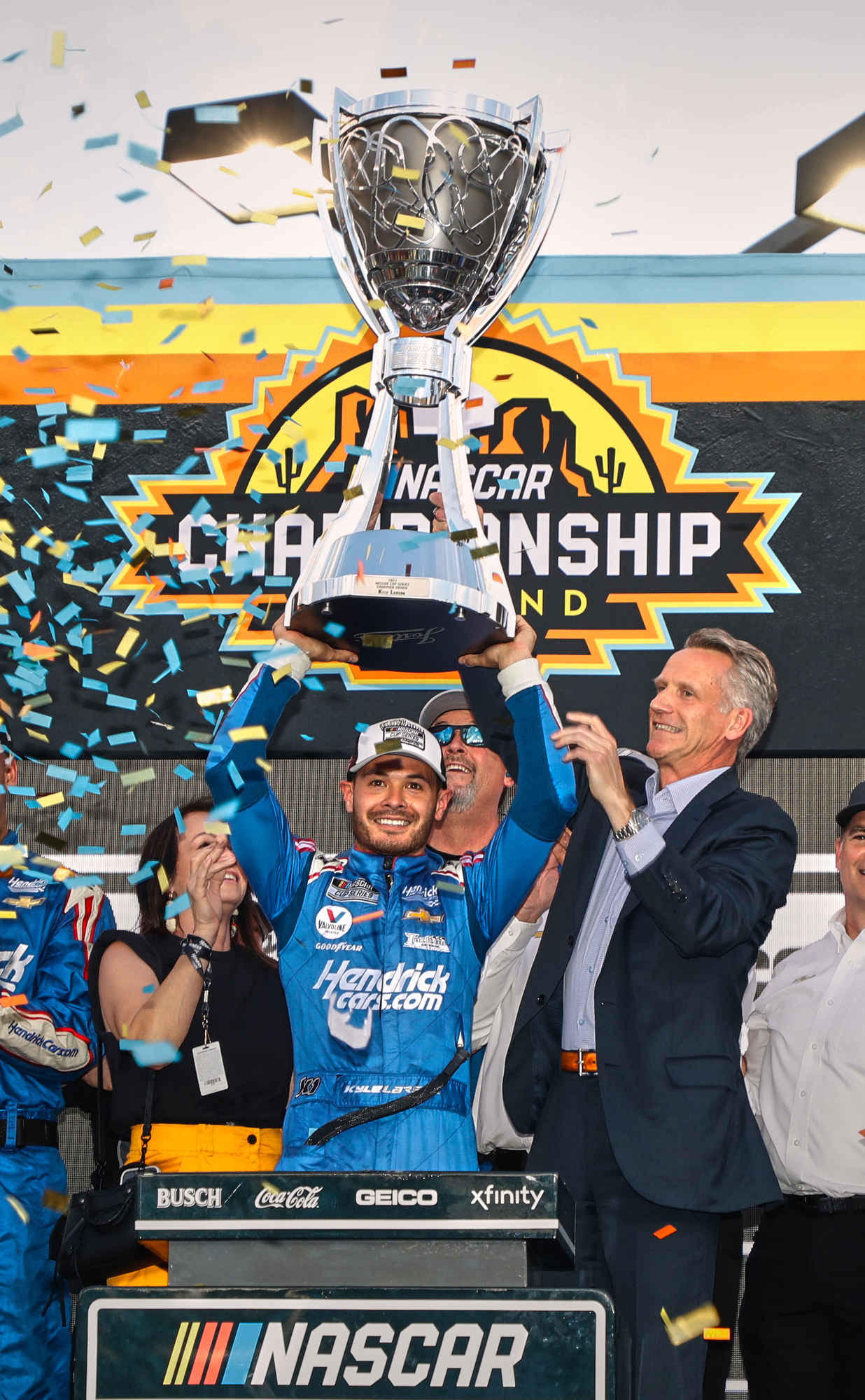 Kyle Larson, driver of the #5 HendrickCars.com Hendrick Motorsports Chevrolet Camaro ZL1 1LE celebrates his victory Sunday, November 7, 2021 after winning the NASCAR Cup Series Championship at Phoenix Raceway in Avondale, Arizona. This is the first NASCAR Cup Championship for Larson who dominated the season with nine other victories, the most Top 10 finishes, the most Top 5 finishes and the most laps led in NASCAR Cup history. (Photo by Harold Hinson/HHP for Chevy Racing)

Clinches with Victory in Season-Finale’ at Phoenix

AVONDALE, Ariz. (November 7, 2021) – With just over 20 laps to go, Kyle Larson won the race off pit road – picking up three spots, all against the other Championship 4 contenders – and led the rest of the way to win the Series Finale 500 at Phoenix Raceway – and the 2021 NASCAR Cup Series Driver’s Championship.

“I cannot believe it,” said Larson after the race. “I didn’t even think I’d be racing a Cup car a year and a half ago. To win a championship is crazy. I’ve got to say first off thank you so much to Rick Hendrick, Hendrickcars.com, Jeff Gordon, NASCAR, every single one of my supporters in the stands, watching at home, my family. I’ve got so many of my friends and family here. My parents, my sister, my wife and kids.

“There were so many points in this race where I did not think we were going to win. Without my pit crew on that last stop, we would not be standing right here. They are the true winners of this race. They are true champions. I’m just blessed to be a part of this group. Every single man or person, man and woman at Hendrick Motorsports, this win is for all of us, and every one of you. This is unbelievable. I’m speechless.”

Chase Elliott, driver of the No. 9 NAPA Auto Parts Camaro ZL1 1LE, was seeking his second consecutive championship, but finished fifth in the race to finish fourth in the final standings.

Larson, in his first season in the No. 5 HendrickCars.com Camaro ZL1 1LE, also won the regular-season championship.

“What a great way to finish the season. This is great day,” said Jim Campbell, Chevrolet U.S. Vice President of Performance and Motorsports. “Congratulations to Kyle Larson, Cliff Daniels and the No. 5 HendrickCars.com Camaro ZL1 1LE team on winning the NASCAR Cup Series Championship. Kyle ran consistently up front all year long. The crew executed efficiently in the pits. Cliff and the engineers called the right race strategy throughout the season. Congratulations to Kyle on becoming Chevrolet’s 33rd Cup Series Driver’s Champion.

“We have been proud partners with Rick Hendrick and Hendrick Motorsports for over 38 years, and want to also congratulate Rick and the organization on earning their 14th NASCAR Cup Series title.”

Larson is the first driver to win 10 NCS races in a season since Team Chevy Jimmie Johnson in 2007. Larson also led the series this year with 18 stage wins, and 20 top-five and 26 top-10 finishes. He also became the first driver in 34 years to record two three-race winning streaks in a single season. Team Chevy legend Dale Earnhardt Sr. twice won three in a row on the way to his third of a record seven career Driver’s Championships.

Larson led 107 laps in the final race, the most of any driver.

Chevrolet closes the season with five consecutive wins for a total of 19, the most since it won 20 in 2014. Chevrolet now has 814 all-time wins in the series to lead all manufacturers.

The NASCAR Cup Series returns to competition with the Daytona 500 season-opener at Daytona International Speedway on February 18, 2022.

Team Chevy high-resolution racing photos are available for editorial use.