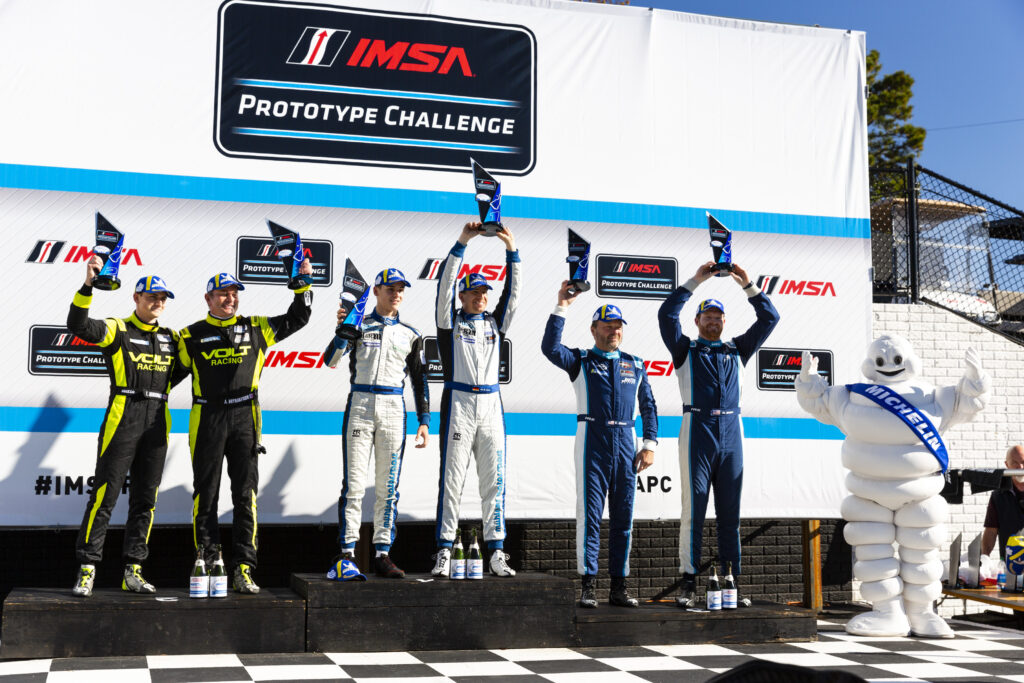 Capping off a breakthrough year Jr III Racing’s No. 3 Ligier JS P320 driven by Mike Skeen and Terry Olson claimed the final spot on the podium in the IMSA Prototype Challenge (IPC) Finale at Michelin Raceway Road Atlanta on Friday.

The No. 33 Airbnb Ligier JS P320 of Ari Balogh and Garett Grist battled through adversity to finish the season finale in sixth.

Starting from fourth row, Balogh climbed aboard the No. 33 Ligier in seventh with Olson just behind in the No. 3 Ligier in eighth for the opening stint. Overnight rain made for a damp start for the field of Prototypes. The race clock began to tick,but the field of 17 entries remained under yellow flag conditions due to a competitor going off course during the pace lap.

When the green flag waved , Balogh and Olson were quick to push their Ligier machines, each gaining a position on the opening lap. The first hour saw green flag running until a full course caution was deployed on lap 24.

Utilizing the slower pace under yellow, Olson came to pit lane completing his 27 lap stint and handed the car to Skeen who returned to the course in 10th. Balogh came to pit lane on lap 28 for a driver change to put Grist in and a full tank of fuel. With 58 minutes remaining on the race clock, Grist focused on maneuvering lapped traffic.

Skeen had his eye on the competitors ahead making a daring pass down Turn 12 and sliding past three fellow Prototypes as the green flag flew. Skeen placed the No. 3 Ligier into the top five on lap 49. A sprint to the checkered was in order as the final yellow flag appeared on lap 50.

Grist in the No. 33 Ligier shot up the running order on the restart and moved from 10th to fifth in the melee. Grist maintained the position for the final 13 laps before a drag race to the finish brought the No. 33 Airbnb Ligier JS P320 to the line in sixth.

Clean maneuvering by Skeen on the restart allowed him to take over third. After 67 laps, Skeen brought the No. 3 Jr III Racing Ligier JS P320 to the checkered flag in the final podium spot. The third place finish is the second podium appearance for Skeen and Olson – the duo captured a second place finish at Mid-Ohio Sports Car Course earlier this year

“The conditions at the start were treacherous so my entire focus was staying on the track and just keeping pace at first,” said Olson. “When we finally had some grip in the tires, it was just a ball to drive the car. It handled terrifically and the team set it up to just really go. My goal was to turn it over cleanly to Mike (Skeen) and let him do his thing. To get a podium result today is amazing. What a day.”

“It was certainly a difficult race and I just wanted to make sure we could keep it on track and try to finish as high as possible,” said Skeen. “What really helped us today was our competitors making mistakes. We utilized that to gain a few positions and set us up to make a charge on the last restart. I am really happy to get a podium for Jr III Racing and be able to end the season on a high note.”

The Jr III Racing squad will stay at Michelin Raceway Road Atlanta as they partake in the Motul Petit Le Mans in the IMSA WeatherTech LMP3 category on Saturday, November 13th. Balogh, Grist and Spencer Pigot will combine in the No. 30 Airbnb Ligier JS P320 and start from eigth for the team’s first IMSA WeatherTech Sports Car Championship endurance event.