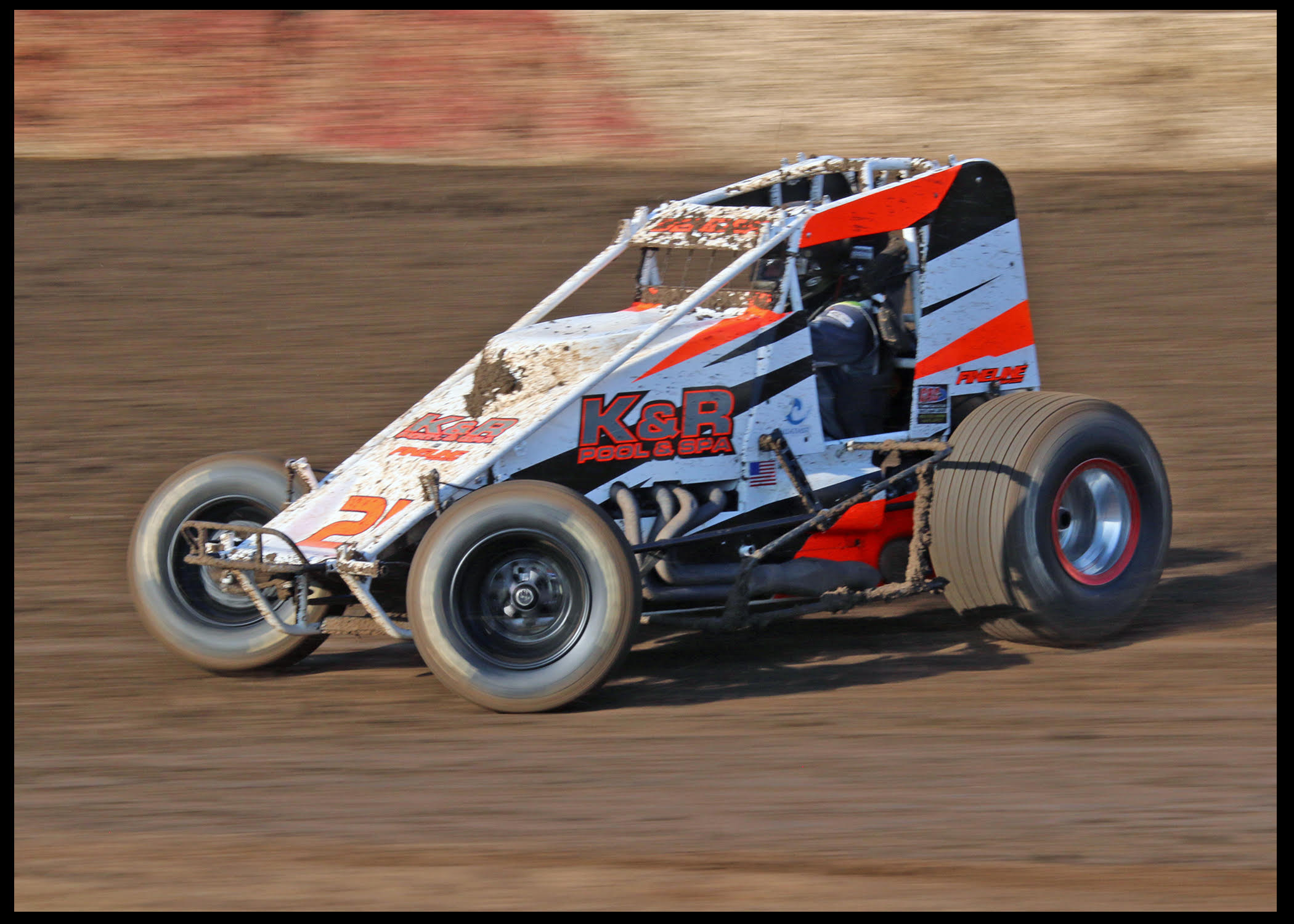 (San Diego, CA, December 10, 2021) Coming off the biggest win of his career in the sprint car portion of the 80th Annual Turkey Night Grand Prix at the Ventura Raceway, A.J. Bender is pleased to announce that he will be driving for two-time NHRA Funny Car champion Cruz Pedregon in January’s 36th Chili Bowl Nationals in Tulsa, Oklahoma.

Bender had one of the performances of the year in sprint car racing at Turkey Night. After patiently stalking the leaders throughout the race, he found rubber on the bottom side late in the 30 lapper. He quickly commandeered the fourth-place spot and less than a lap later he sent the sellout crowd into a frenzy when he sensationally went from fourth to first in less than one lap.

For years, Bender has been one of the best kept secrets in Southern California Open Wheel racing. However, his prowess in 2021 has let the cat out of the bag. Especially his late season endeavors in both full size sprint cars and lightning sprints. The night after his big win in Ventura, the 28-year-old was enjoying a night at home with his wife and daughter when the phone rang.

“Sunday night I am home sitting on the couch, and I got a message through Facebook from Cruz Pedregon’s manager,” Bender told listeners on last Sunday’s “Racer Radio Show.”  “He said Cruz was interested in talking with me and asked if he could get my number. He (Cruz) called me the next day and told me he was watching me at Ventura. He said he was really impressed with me, and he has a midget ready to go and he wanted to know if I wanted to come run it. I was like a kid in a candy store, and I think I said yes before he was done talking.”

Bender has raced 410 sprint cars for several years and he has competed in lightning sprints since being crowned “Rookie of the Year” in the California Lightning Sprint Car Series at age 15 in 2008. However, when he climbs into Pedregon’s Snap-On/Glen Styres Racing/Petroff Towing/Spike/Pink Ford/#6A in Tulsa, it will be his first time in a midget. That made the veteran driver nervous as he knew he had to tell Pedregon he had never raced a midget before.

“I told that (never driven a midget) to Cruz, and he told me not to worry about it,” Bender laughed. “He told me I would be all right. He watches all the races, and he knew me from before. He said he has been told that weight to power and track size, sprint cars at Ventura are like midgets at the Chili Bowl. He thinks I will do good. I have wanted to drive a midget for a long time.”

Bender heads to the Chili Bowl not only after his sensational Turkey Night Grand Prix victory, but also an amazing run in one of Sexton Gatlin Racing’s lightning sprint cars. In October Brent Sexton approached Bender about driving one of his team cars at the prestigious California Cup in Lemoore, California. To say Bender did not disappoint SGR is an understatement. The first night at Lemoore he placed fifth in the main event. Twenty-four hours later, he went four positions better and won. The final night he placed third.

The Lemoore races impressed Sexton so much he brought Bender along for the final four California Lightning Sprint Car Series races of the 2021 campaign. First off was the 5th Annual Western States Lightning Sprint Car Championship at the Bakersfield Speedway on November 16th. Bender bagged the win again! After a night off, the team ventured north for three straight nights of racing in the “Hangtown 100” at the Placerville Speedway. Bender finished second all three nights.

In seven nights of racing for SGR, Bender had one win, three second place finishes, one third and a fifth.

“A.J. is very easy on equipment,” SGR head man Sexton said. “He is a very smart driver, and he has a huge will to win. We are incredibly pleased with what he achieved driving for us in October and November. He is welcome to come back and race with us at any time.”

The Chili Bowl Midget Nationals is one of the premiere open wheel races in the world. More than 300 drivers from all disciplines of racing, including NASCAR, NHRA and Indy Cars, take part in the six-day racing extravaganza. The race will take place from January 10-15 on the Tulsa Expo Raceway inside the massive SagNet Center, which is one of the largest free-spam buildings in the world. For fans unable to make it to Tulsa for the race, all six nights will be shown live on https://www.floracing.com/.

A couple weeks after the Chili Bowl, Bender should be back in action when the USAC/CRA Sprint Car Series kicks off its 18th season at Yuma, Arizona’s Cocopah Speedway on January 27, 28 and 29.

Fans can listen to Bender talk about the upcoming Chili Bowl and his win in the Turkey Night Grand Prix on a replay of “Racer Radio Show” at the following link http://www.perrisautospeedway.com/radio21/RACERRADIO211205.mp3

Bender would like to thank the car owners who made his 2021 season possible. Kim and Richard Bender in the USAC/CRA Series, and Schweitzer Racing & Sexton Gatlin Racing in the CLS. If you or your company would like to join him on one or all the teams for the 2022 season, give him a call at (760) 703-4741.