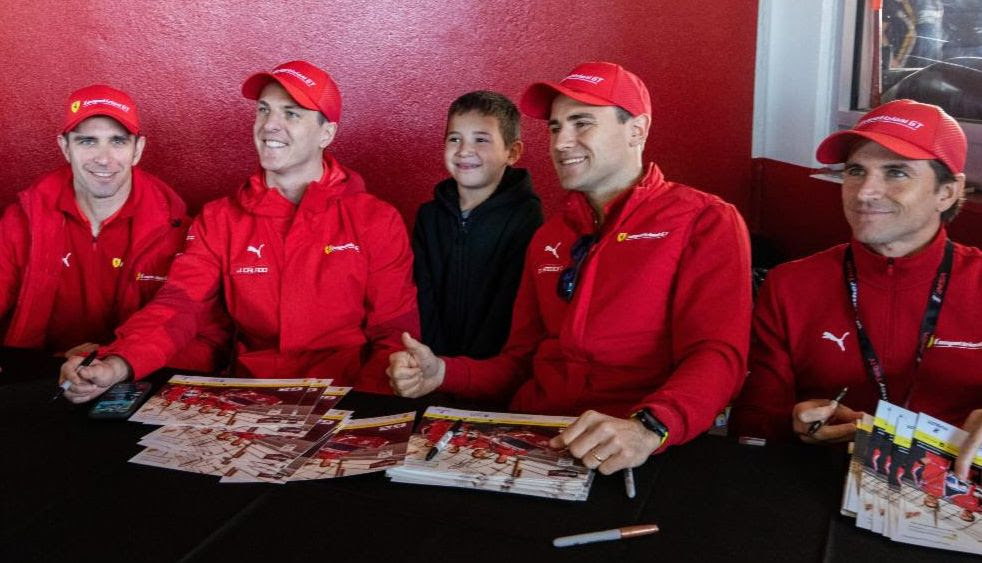 Houston, Texas (January 12, 2022) … The 60th annual Rolex 24 at Daytona race is an endurance benchmark in sports car racing history at the Daytona International Speedway in Daytona Beach, Florida. The Houston, Texas-based Ferrari team of Risi Competizione has plenty of its own racing history over the decades. The team owned by Giuseppe Risi will once again vie for victory at the IMSA WeatherTech SportsCar Championship Rolex 24 At Daytona, January 29-30, 2022, seeking to add its name further to the history books.

Drivers for the popular No. 62 Risi Competizione team for Daytona are no strangers to the Rosso Corsa red liveried Ferrari. Returning to the cockpit are Brit James Calado, Italians Alessandro Pier Guidi and Davide Rigon, and Brazilian Daniel Serra. All four are Ferrari Competizioni GT factory drivers and most recently all competed together in 2020 in the Risi Ferrari at Daytona. Additionally, Calado, Pier Guidi and Serra captured the GTLM victory at Petit Le Mans in 2019 for Risi Competizione.

The Risi team will be challenging the 3.86-mile, 12-turn Daytona sports car circuit in a new Ferrari 488 GT3 EVO 2020 in the new for 2022 IMSA GTD Pro class. The Ferrari GT3 features a twin turbo V8 with around 600 hp with 3902 cc total displacement. IMSA’s GTD class is now based on the global GT3 specs car, which is used all over the world in multiple series. The GTD Pro class replaced IMSA’s previous GTLM class using a Pro/Pro format and its GTD class continues using a Pro/Am pairing.

“We will be competing in this year’s Rolex 24 with the new Ferrari 488 GT3 Evo GTD Pro entry,” said Giuseppe Risi, Team Principal. “The 24 Hours of Daytona is always on my mind as a race for the team to compete for a victory. This year we have a new Ferrari 488 GT3 Evo 2020 car and a strong line-up again of Ferrari Competizioni GT factory drivers with Calado, Pier Guidi, Rigon and Serra. They all are talented drivers, know the car well and compete regularly at the highest level of racing on a global scale. James and Ale won both the FIA WEC championship and Le Mans last year, so they are at the top of the sport. Davide and Daniel continue to add success to the Ferrari name as well. With the solid driver line-up and always prepared race team, we’re ready to contend for victory at Daytona later this month.”

The Risi Ferrari team and all four drivers will also participate in the Roar Before the 24 test days, January 21-23.

This year will be Risi Competizione’s 22nd entry in the renowned Rolex 24 race, its first being in 1998 with a number of years skipped while competing in the former American Le Mans (ALMS) series. The team’s record includes one class victory (2002), and four additional podium finishes (second place in class in 1999, 2003 and 2019; third-place in class in 2017). Last year the Risi team finished fourth in class and just one lap down during a very challenging Daytona enduro.

The 2022 Daytona 24 competition will be Calado’s seventh Rolex 24 race, with all six previous appearances with Risi and four Top 5 finishes. Pier Guidi will be making his ninth Rolex 24 race appearance and has celebrate one victory in 2014. Rigon will also be making his ninth Rolex appearance and seventh time with the Risi team. Serra will also be competing at Daytona for the ninth time and just the second with Texas squad.

No additional racing plans have yet been announced for the 2022 racing season by the Risi Competizione team but are under consideration.