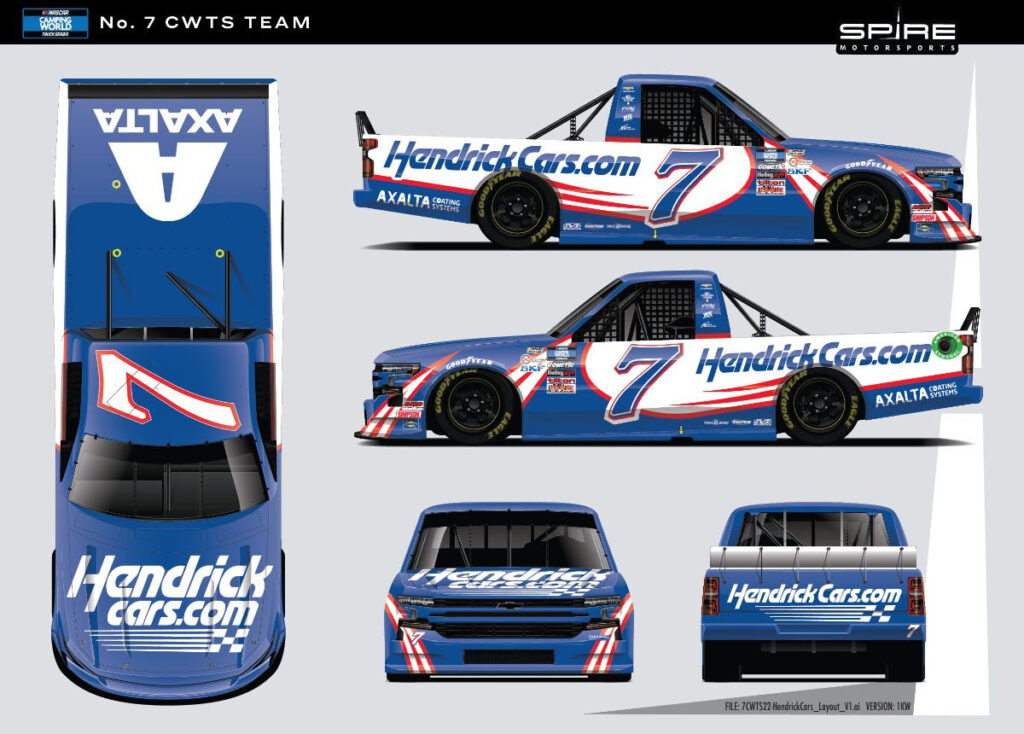 HendrickCars.com will serve as the effort’s primary sponsor while Axalta, Byron’s NCS majority partner, will be showcased as an associate sponsor on the truck’s decklid and lower-rear quarter panels.

Byron has tallied 14 checkered flags across NASCAR’s top three national touring series, including three in the Cup Series, four in the NASCAR Xfinity Series and seven in the NCWTS. He also collected rookie of the year honors in all three series – one of three drivers to do so – and was crowned the 2017 Xfinity Series champion.

“I’m really excited to get in Spire’s truck this week at Martinsville,” said Byron. “Even though it’s been a couple years since I was in a truck at Martinsville, I had good runs before with a couple top-10 finishes, including a third-place result. I’m excited to see how things have changed since that time. Plus, any more track time at Martinsville is always good since it’s such a rhythm-based track. Bono (Kevin Manion) and the No. 7 truck ran well when they were at COTA and he has done a great job at Martinsville in the past, as well. It should be a fun time.”

Byron, a Charlotte, N.C., native is the full-time driver of Hendrick Motorsports’ No. 24 Chevrolet Camaro ZL1 in the NCS and a five-year veteran of NASCAR’s premier series with 151 starts on his résumé. The 24-year-old has earned a win on NASCAR’s senior circuit in each of the last three seasons including his most recent victory in the March 20 Folds of Honor QuikTrip 500 at Atlanta Motor Speedway.

In seven NCS races this season, he has notched one win and three top fives, including a third-place effort last weekend at Richmond Raceway. He currently sits fourth in the NCS championship point standings with 19 races remaining in the regular season.

“We’re thrilled to have William Byron behind the wheel of our No. 7 truck Thursday night at Martinsville Speedway,” said Spire Motorsports co-owner Jeff Dickerson. “Two hundred laps under the lights at a short track like Martinsville is what racers live for. Door-to-door, side-by-side racing is the type of competition our sport was built upon. The on-track product will be second-to-none and emotions are guaranteed to be on full display. Obviously, we’re not racing for points so it’s a lot of fun to put William in the seat, pull out all the stops and see if we can pick up our first Camping World Truck Series win.”

The Blue-Emu Maximum Pain Relief 200 from Martinsville Speedway will be televised live on FS1 Thursday, April 7 beginning at 8 p.m. Eastern Daylight Time. The race will be broadcast live on the Motor Racing Network and SiriusXM NASCAR Radio Channel 90.

About Spire Motorsports …
Spire Motorsports was established in 2018 and is co-owned by Jeff Dickerson and Thaddeus “T.J.” Puchyr. In 2022, Spire Motorsports will field two full-time NASCAR Cup Series entries. Corey LaJoie will drive the team’s No. 7 Chevrolet Camaro ZL1 in NASCAR’s premier series for the entire 2022 campaign while Josh Bilicki and Landon Cassill will split time in the team’s No. 77 entry. The team will also field a NASCAR Camping World Truck Series team in select events.

Spire Motorsports earned an upset victory for the ages in its first full season of competition when Justin Haley took the checkered flag in the Coke Zero Sugar 400 at Daytona International Speedway on July 7, 2019.