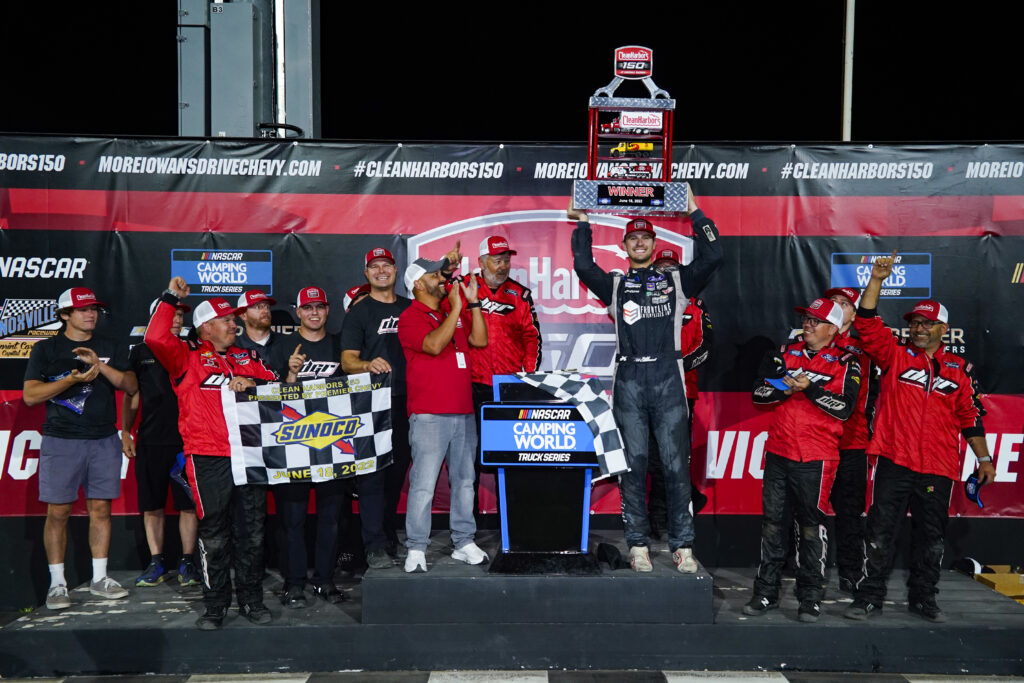 Gilliland grabbed the lead from John Hunter Nemechek for the final time on Lap 140 of 150 and pulled away after a restart on Lap 147 to beat Nemechek to the finish line by .945 seconds and win in his first start of the season and for the third time in his career.

On the eve of Father’s Day, during an off week for his full-time NASCAR Cup Series ride with Front Row Motorsports, Gilliland delivered the victory for his father and team owner, David Gilliland.

“This will make tomorrow a lot more fun,” said Gilliland, who plans to enjoy brunch and play golf with his father on Sunday. “The Cup Series is tough, just racing every single week. I’ve had like a million people ask me, ‘Is this really what you want to do on your off week?’

“Absolutely. Nothing beats racing. I tell everyone I’m young, and I wish I could do this every single week of the year… I love the trucks. I ran here forever, it felt like. So to be able to come back and to get one, it’s so special.”

In winning the race, Gilliland fulfilled his father’s wish.

“I told him when the race started, all I want for Father’s Day is that trophy,” David Gilliland said. “We’ll be taking it home on the plane with us.”

But the race wasn’t decided until the sun also set on the dominant truck of Carson Hocevar.

Still recovering from a broken right tibia sustained two weeks ago at St. Louis, Hocevar took the lead from pole winner Derek Kraus on the first lap and didn’t relinquish it until his engine expired after a restart on Lap 66.

“I’m blowing up,” exclaimed Hocevar on the team radio before bringing his No. 42 Niece Motorsports to a stop high in Turn 1. “No oil pressure—totally freakin’ bit. Unbelievable!”

Coincidentally, the engine in the No. 41 Niece Chevrolet driven by Tyler Carpenter failed on the exact same lap. Carpenter had earned his series-debut ride by winning the Super Late Model division at the Gateway Dirt Nationals in St. Louis in December.

Hocevar’s abrupt exit handed the lead to Gilliland, who held it from Lap 66 through the conclusion of Stage 2 on Lap 90.

Brett Moffitt, Grant Enfinger, Kaz Grala and Buddy Kofoid opted not to pit during the second stage break and restarted from the top four spots on lap 92. Moffitt charged to a comfortable lead but was black-flagged for accelerating before the restart zone.

The penalty for the infraction—a drive through the pit area—dropped Moffitt to 21st in the running order and gave the lead to Enfinger, who held the top spot for 10 laps before Gilliland regained the point on Lap 102.

Nemechek took the lead on the restart lap and held it until Gilliland regained it 17 circuits later.

Gilliland is the 11th different winner in the 11 dirt-track races in the history of the NASCAR Truck Series.

Zane Smith finished third on Saturday, followed by Ty Majeski and Stewart Friesen, who was a contender for the win until a cut tire on the final lap of Stage 1 dropped him to 22nd in the running order.