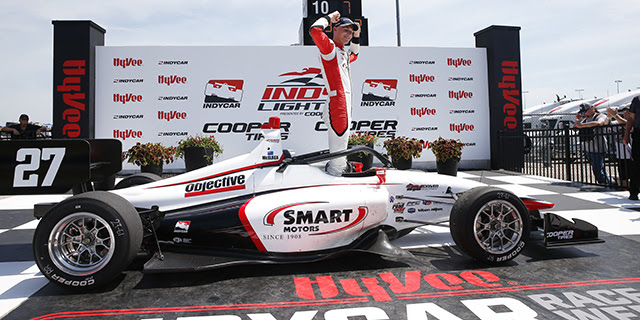 Series points leader Lundqvist took the checkered flag first in the No. 26 HMD Motorsports with Dale Coyne Racing car, 3.4258 seconds ahead of McElrea in the No. 27 Andretti Autosport car on the .894-mile oval. But INDYCAR officials determined Lundqvist made avoidable contact with Matthew Brabham in a duel for the lead with five laps to go, damaging Brabham’s front wing.

“Not the way I want to get it, obviously,” McElrea said. “I think, to be honest, Matt deserved that. But I’ll take it. Back to back. You’ll take what you can get in this game.”

McElrea’s victory in the first oval race of the Indy Lights season was the 250th across all series for Andretti Autosport.

The flashpoint of the 75-lap race took place on Lap 71. Leader Lundqvist lost momentum in Turn 1, and Brabham pounced by steering to the outside lane, looking to pass as they drove nearly side by side entering Turn 2. Lundqvist moved up to the high line before he was clear of Brabham, making contact with and damaging Brabham’s front wing. Brabham also made right-side contact with the SAFER Barrier exiting Turn 2 while trying to avoid contact with Lundqvist.

“It was a close fight,” Lundqvist said. “I got a little bit loose through (Turn) 1, and I saw that he was behind me. But I got a ‘clear’ from my spotter, so I switched my lane, and unfortunately I think my rear just touched his front nose. It’s inch-perfect on ovals, and I put my trust in the spotter. Sorry to Matt for the incident.”

Said Brabham: “My perspective is that I got drove into the wall. It looked like he was struggling coming off that corner, and I took the high line and he took the low line. It looked like he just committed to going low and trying to block for the next corner. I said, ‘If you’re going to give me the top, I’ll take the top.’ There was overlap, and we’re still side by side, and I felt like he figured out, ‘Oh, maybe he doesn’t want to give me the top,’ and came over.

“He said his spotter cleared him. But we still have mirrors, at the end of the day. He knew I was there because he was giving me the lane at first.”

Brabham hung on to second place on track in his damaged car until the final lap, when teammates McElrea and Rasmussen passed him.

McElrea led the first 50 laps from pole, resisting a move by Lundqvist for the lead on Lap 35. But Lundqvist passed McElrea for the lead on the only restart of the race, on Lap 50. McElrea’s car drifted toward the SAFER Barrier in Turn 4 as the field headed for the green flag on the restart, giving Lundqvist a huge opening to exploit.

“That restart, I don’t know what I did,” McElrea said. “I’ll have to look back, look at the footage and stuff. Really not good enough to get up in the marbles like that.”

Despite losing what would have been his fifth victory of 2022 to the penalty, Lundqvist still maintains a sizable lead in the series standings with five races remaining this season. He is 77 points ahead of McElrea, who leapfrogged teammates Sting Ray Robb and Brabham to jump from fourth to second in the championship.