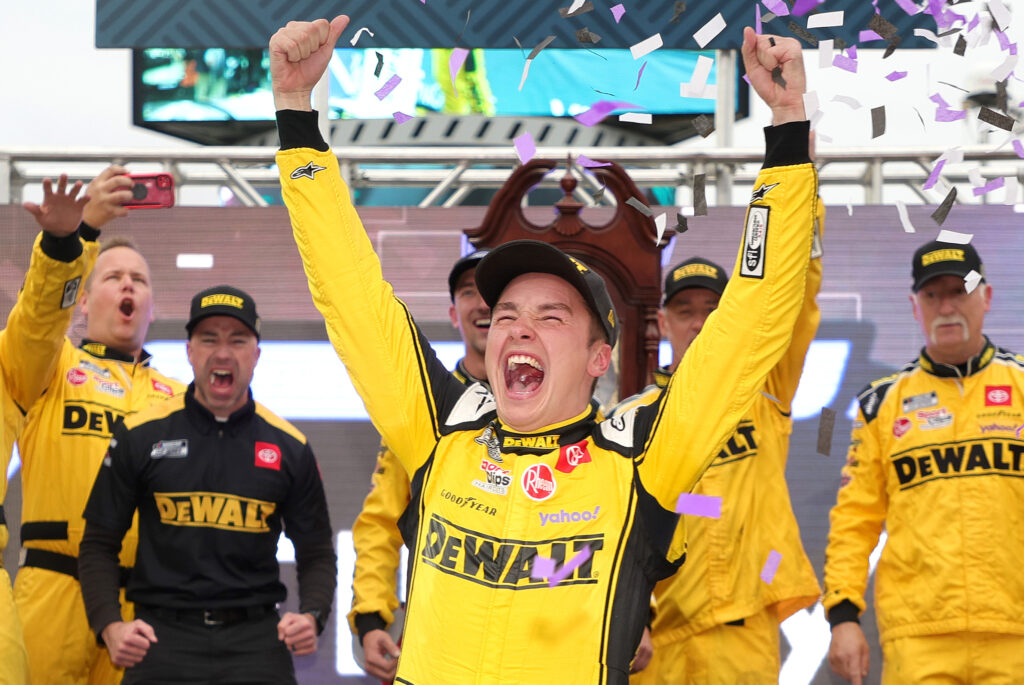 MARTINSVILLE, Va. – Christopher Bell had another miracle in his pocket, but Ross Chastain stole the show with a scarcely believable video-game move in the final corners of the Xfinity 500 at Martinsville Speedway.

For the second time in as many rounds in the NASCAR Cup Series Playoffs, Bell won a race he had to win. After beating pole winner Kyle Larson to the finish line by .869 seconds, Bell will race for the series title next Sunday at Phoenix Raceway.

“Mom and dad, we did it—wow,” an emotional Bell said after the race. “I can’t believe it, man. To come here in Martinsville, this place has always been so tough on me. Just pre-race looking up, seeing all the fans, this place is packed… I don’t even know what to say.

“Man, I say it all the time, but the driver is just a small piece of the puzzle for these races. The reason why this car won today is because it was the best car on the race track. (Crew chief) Adam Stevens… this entire 20 group, they just never give up. When our back is against the wall, looks like it’s over, they show up and give me the fastest car out here.”

The victory was Bell’s third of the season and his second in a must-win situation. On Oct. 9, he won the Bank of America ROVAL 500 at Charlotte to stave off elimination from the Playoffs.

But it was Chastain who added most significantly to the lore of the historic .526-mile short track with a shocking trip around Turns 3 and 4 that knocked veteran Denny Hamlin out of the Playoffs.

Running 10th and facing elimination on the last lap, Chastain pinned his No. 1 Chevrolet to the outside wall entering Turn 3, kept his throttle open and rocketed around the fence as if he had just ignited an afterburner.

The amazing move carried Chastain past Hamlin into fourth place and into the Championship 4. Chastain completed the final lap in 18.845 seconds, .864 seconds faster than Larson’s pole-winning time.

“I made the choice, grabbed fifth gear down the back,” Chastain said. “Fully committed. Basically let go of the wheel, hoping I didn’t catch the Turn 4 access gate or something crazy. But I was willing to do it.

“I just cannot believe that we have a chance to go fight for a championship. All we ask for is a chance. We kept our world small this year so far. We’ll do the same thing going to Phoenix.”

Ninth-place finisher Chase Briscoe was eliminated from the Playoffs, but not for lack of effort. Briscoe stayed out on old tires during the final caution and restarted in the lead with 24 laps left. But Briscoe gave up the top spot to Bell, who had pitted for four fresh tires, on Lap 496 of 500.

“Yeah, we were obviously on a lot older tires there,” Briscoe said. “Thought there for a little bit I was going to be OK. I just fell off a cliff pretty hard. I should have used the wall. Pretty good deal to use there.”

The Hendrick Motorsports duo of Larson and Elliott dominated the early going. Larson led the first 68 laps before Elliott passed him for the top spot in traffic and stayed out front for the next 52 laps.

But Hamlin, who had started 11th, drove through the top 10 and took the lead on Lap 121, with nine laps left in the first stage. Hamlin stayed at the point for 203 laps, winning the first two stages. He didn’t relinquish the lead until Bell won the race off pit road on Lap 276, under caution for Austin Dillon’s hard crash into the Turn 4 wall three laps earlier.

Hamlin lost positions on three consecutive pit stops in the final stage of the race. He restarted 13th, one spot behind Chastain, after a 14.5-second stop under caution on Lap 470.

Hamlin advanced to fifth and had the final Championship 4 spot in hand until Chastain rocketed around the wall through the final corners.

“You got to execute all day,” Hamlin said. “We just didn’t control the race when we had control of it. Each caution we just kept losing some spots. That’s the way it is.”

Brad Keselowski crossed the finish line just ahead of Chastain and Hamlin in fourth but failed post-race inspection and is now credited with a 36th-place finish. As a result, Chastain finished the day in fourth, followed by Hamlin, Logano, Byron, Bubba Wallace, Briscoe and Elliott rounding out the top 10.