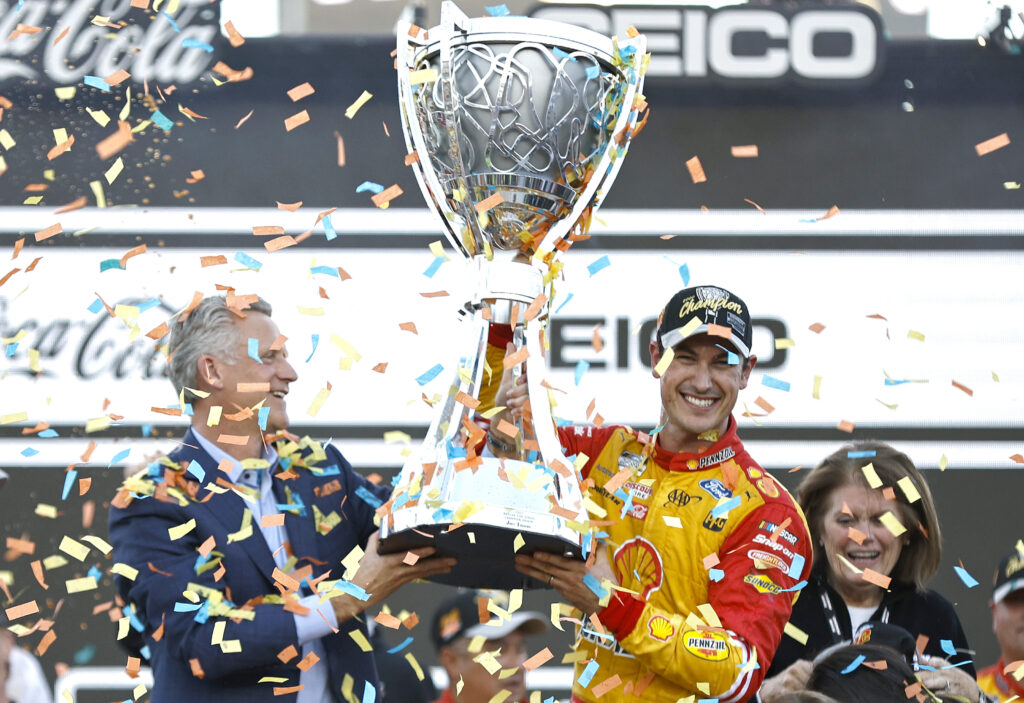 AVONDALE, Ariz. – It was the perfect ending to a season Joey Logano started with a win.

Logano joins two-time champion Kyle Busch as only the second active driver in the series to hold more than one title. The victory was his fourth of the season, his third at Phoenix and the 31st of his career in his 507th Cup start.

Back in February, Logano won the competitive debut of NASCAR’s Next Gen car in the exhibition Clash at the Coliseum in Los Angeles. On Sunday, in a sprawling desert city some 370 miles to the east of L.A., he put the finishing touch on a dream season.

Logano finished .301 seconds ahead of Team Penske teammate Ryan Blaney. Championship 4 contender Ross Chastain was closing fast in the final laps and came home third, 1.268 seconds behind Logano on the track and one spot behind the driver of the No. 22 Ford in the final standings.

“We did it!” exulted Logano, the first Ford active driver to hold two championships since David Pearson in 1968-1969. “We’re champions again—yes! Oh, my God, I’m so excited. Thank you to everybody, my team. You guys are amazing. Gave me a good race car, good pit stop there at the end, got us up in front. Boy, that was just intense there at the end.

“It’s all about championships. That’s what it’s all about, and we worked so hard the last couple weeks trying to put ourselves in position.”

Logano restarted third on Lap 280 after hard contact between the cars of Alex Bowman and Michael McDowell caused the sixth and final caution of the day. Three laps later he passed Chase Briscoe for the lead and opened a lead of nearly three seconds over Chastain, who was pursuing from third place.

Chastain had the faster car in the final 20 laps but ran out of time.

“I had a car fast enough to chase him down at the end,” Chastain said. “I think we did everything we could. That was a heck of a drive for us.”

A disastrous 19.8-second pit stop under caution on lap 271 cost Championship 4 driver Christopher Bell an opportunity to contend for the win. Bell restarted 16th with 33 laps remaining and worked his way up to 10th at the finish.

“We fought hard, and at the end of the race… (until) the last pit stop, or what we thought was going to be the last pit stop, we were right there battling for it,” Bell said. “I’m just proud to be in this position, proud to be at Joe Gibbs Racing and race this No. 20 car. We were there, and hopefully, we can come back here next year.

“The 22 (Logano) was lights-out all weekend. The best car definitely won the championship.”

Chase Elliott, the 2020 series champion, wasn’t in position to race for the title after Lap 205. In a wild restart, Elliott’s No. 9 Chevrolet spun off the nose of Chastain’s No. 1 Chevrolet and slammed sideways into the interior SAFER barrier in the dogleg of the one-mile speedway.

Elliott lost a lap in the pits under repairs and lost another on the track on Lap 230. He finished 28th, two laps down, but he scrupulously avoided laying blame for the incident after the race.

Chastain, on the other hand, provided his in-depth analysis of the wreck.

“William (Byron) didn’t get going quite as well as he wanted to, and I got to the left of him,” Chastain said. “And I saw an erratic move he (Elliott) made to cover it, and I was already there. Yeah, it’s not how I want to race him or those guys.”

Before the race, Bell received the news that Coy Gibbs, vice chairman of Joe Gibbs Racing, son of team owner Joe Gibbs and father of NASCAR Xfinity Series champion Ty Gibbs, had passed away in his sleep hours after seeing his son wrap up the title.

“All of a sudden you wake up this morning and you are racing for a championship, and you are happy, you are elated, and then your world comes crashing down,” Bell said. “Whenever you get news like that, it puts it in perspective that there is more to this than racing. The whole Gibbs family is in all of our prayers. I’m thinking of them.”